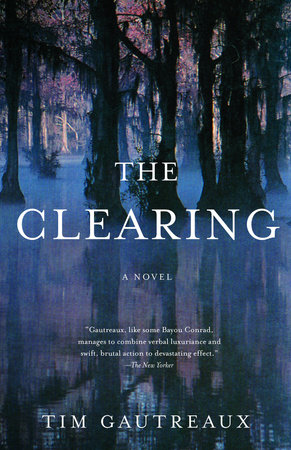 “Gautreaux, like some Bayou Conrad, manages to combine verbal luxuriance and swift, brutal action to devastating effect.” —The New Yorker

The introduction, discussion questions, suggestions for further reading, and author biography that follow are designed to enhance your group’s discussion of The Clearing, Tim Gautreaux’s powerful story of a mill town steeped in violence in the aftermath of WWI.

The Clearing is set deep in the Louisiana swamp in 1923, in the isolated town of Nimbus, a place hard to get to and even harder to get out of alive. Nimbus is a raw place, filled with snakes, alligators, hard-fighting mill workers, and bountiful cypress trees. There is no church, no school, no civilizing influence of any kind. The saloon, run by the cousin of a Sicilian mobster from Chicago, is the only public institution, and it regularly erupts in drunken, murderous fights. Only brute force—in the shape of lawman Byron Aldridge—maintains a precarious order in the town. Byron is back from WWI, where the killing he both witnessed and committed has forever changed him. Once the heir apparent to his father’s timber empire, he has fled from his family in Pennsylvania into this remote region, where his life consists of breaking up brawls and listening to sentimental music on his Victrola.

Byron’s father decides to send someone down to bring him back into the fold, and when younger brother Randolph arrives in the swamps, he finds himself drawn into a world unlike anything he has ever encountered. Randolph soon discovers that his own morality, his own sure sense of right and wrong, is badly shaken by his brother’s actions. Is it justifiable to use violence to stop violence? Is it always a sin to take another life, even when doing so might save others? These are the moral questions most powerfully dramatized in The Clearing. For when Randolph decides to shut down the saloon on Sundays, the most violent day of the week, the owners down river in Tiger Island begin a cycle of brutality and revenge that threatens to engulf Randolph and Byron, their wives, their workers, and even an innocent child.

In writing that is vividly alive to both the rich physical texture of place and to the most enduring human questions, The Clearing is a tour de force of the moral imagination.

1. How can the title The Clearing be interpreted? What does it refer to, literally? What symbolic meanings might it have? Does the novel follow a course from confusion to clarity?

2. As Randolph moves down the river towards Nimbus, he has “the sense that the boat was rocking away from more than just a mud bank, the paddle wheel slapping down the tarry water on a voyage beyond the things he knew” [p. 23]. In what ways is Randolph taken beyond his familiar world? How is his life in Nimbus different from the life he has led in Pennsylvania? What does he discover, about himself, his brother, and life itself, on his journey?

3. Randolph considers the dangerous environment of the mill and wonders if “the many-fanged geography rubbed off on people, made them primal, predatory. Had it changed him?” [p. 256]. Has the uncivilized swampland itself made those who live in it more violent? Has it changed Randolph? How?

4. The Clearing takes place in 1923, in the aftermath of WWI. In what way does the enormous violence unleashed by the war hang over the characters in the novel? How has the war affected Byron?

5. Why is Byron so obsessed with melancholy music? What does this obsession reveal about his character? Why would someone so tough respond so emotionally to music? Lillian, thinking about the cycle of revenge, remarks, “men, they act like they smell” [p. 203]. What does she mean by this? Would the presence of more women and more families have softened, or perhaps prevented, the violence both in the saloon in Nimbus and between Byron and Buzetti?

6. Merville tells Randolph, “You know, I got a friend who’s a priest. He says it’s a sin to kill. I got no problem with that, but what if I don’t kill one, and that one kills two or three? Did I kill that two or three? I can’t figure it out” [pp. 59–60]. In what other instances does The Clearing dramatize the moral dilemma of trying to decide when killing is justified, even necessary, and when it is simply wrong, or sinful? Does the novel, taken as a whole, offer any resolution of this dilemma?

7. Why does Randolph tell Byron that he is Walter’s father? What does this action say about Randolph’s character? Why does he regret it?

8. What effect does Walter’s presence have on Byron? How does being around a child change him?

9. When Byron tells Randolph that “A forest is good for more things than shutters and weatherboard,” Randolph asks, blankly, “Like what?” [p. 244]. Why are Randolph and his father unable to see trees as anything other than a way to make money? How do they typify early twentieth-century entrepreneurs?

10. What does The Clearing suggest about the relations between men and women in early twentieth-century America? What roles do May, Lillian, and Ella play in the novel? In what important ways do they differ from the men?

11. What does the novel suggest about race relations during this period?

12. Randolph thinks that soon phones will change everything, because “phones weren’t just ears and voices but eyes as well” [p. 245]. How do the presence of phones and newspapers affect the outcome of The Clearing?

13. How can the extreme and nearly constant violence in The Clearing be explained? What are its causes and consequences? What is the narrator’s attitude toward that violence?

14. Why does Gautreaux end the novel with the blind horse—who knew “that the human world was a temporary thing, a piece of junk that used up the earth and then was consumed itself by the world it tried to destroy” [p. 303]—trying to follow Randolph and Byron? What does the scene signify? Of what is it evocative?

Born and raised in Louisiana, Tim Gautreaux lives there, in Hammond, with his wife, and is Writer-in-Residence at Southeastern Louisiana University. His work has appeared in Harper’s, The Atlantic Monthly, GQ, and Zoetrope, as well as the O. Henry and Best American short-story annuals. His first novel, The Next Step in the Dance, won the 1999 Southeastern Booksellers Award, and he has also published two collections of short fiction.

Lie Down in Darkness

City of God
Back to Top