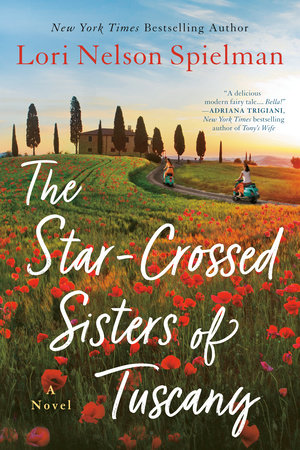 1. When she first steps foot on Italian soil, Poppy cries, “Hiraeth!”: a Welsh word conveying a deep longing for home, a nostalgia—a yearning—for the place that calls to your soul. Do you understand this feeling? Have you ever been to a place that feels inexplicably familiar or eerily unsettling? How do you explain it?

2. In chapter two, Emilia calls Bensonhurst home. When she returns from Italy, her perspective has changed. Have you ever felt trapped by a place you once loved? In what ways does travel change us? Are you more closely aligned with Poppy, an adventurous spirit who’s always in search of something, or the earlier version of Lucy, someone seemingly content in her small but predictable world?

4. Throughout Lucy’s life, her mother tried to mold Lucy into the woman who would eventually break the curse. Do you think her mom had Lucy’s best interest in mind, or do you think she was acting selfishly? Could both be true? How did her mother’s expectations affect Lucy?

5. Lucy’s desperation for love is apparent early in the novel. Later, she falls in love with Sofia. Was Lucy aware of her homosexuality prior to meeting Sofia? Was her mother? How might her life have been different had she acknowledged her sexuality at an early age? Would she have felt the same desperation to fall in love?

6. Poppy claimed the curse was a self-fulfilling prophecy. In what ways was she correct? Have you ever fallen prey to expectations, whether familial, peer, or societal? How did you rise above them?

7. In what ways did the New Year’s Eve car accident change Emilia’s life? Without this twist of fate, do you think she would have found love, perhaps with Liam, and broken the curse? How might the family dynamics have been different had Emilia broken the curse?

8. Even after a heinous betrayal, Poppy still loved her sister. Should love for a sibling be unconditional? Poppy believes she put her sister into a horrible position, having to choose between her husband and her sister. Do you agree? Could you be as forgiving as Poppy? In the end, who was most hurt by the lie, Poppy or Rosa?

9. Rosa was once a loving sister. She experienced many life changes between her childhood in Trespiano and her adult life in Brooklyn. Who or what do you believe is most responsible for her bitterness? Do you feel any empathy for Rosa?

10. Daria admits that she resented Emilia for squandering her freedom. She implies that marriage and motherhood steal this freedom from women. Do you agree? Why or why not? If you had complete autonomy, what might your life be like today?

11. Emilia says, “Young girls often dream of a white dress and a diamond ring. I suppose I had that dream, too, when I was younger. But I’m over it now.” What if, as a young girl, you were told with certainty that you would never find love? How might you be different today? Would you look physically different? What articles of clothing would you banish from your closet? Is it likely you’d have more confidence, or less? Would you have the same friends, or different ones? Might you have lived more authentically, or less authentically? In what ways might your life be happier? In what ways might it be less fulfilling?

12. In the end, Emilia’s single life is rich and full. Even so, she decides to take a chance on romance. Was her openness to love a necessary part of her character arc? How important is romantic love in a woman’s life? If you were to write an epilogue, would the future Emilia be single or in a relationship? Why?

13. Even after telling Emilia and Lucy the truth about Johanna, Poppy wanted to wait until after her sister’s death before telling the rest of the family. Why was this important to Poppy? Do you agree with her decision to protect her sister?

14. Poppy and Rico’s love withstood decades of separation. Do you think this kind of love is possible? They recited their vows on the church’s altar without papers to prove it. Do you believe they were married in the eyes of God? Was Rico right to leave without Poppy, and return to help his family in East Germany? Why or why not? Do you think he would have taken Poppy to Germany had they had a legal marriage certificate?

15. Though she tried, Emilia could not reciprocate her friend Matteo’s romantic feelings. But when Poppy tells her love comes in many forms and that not all love is romantic love, she rethinks her relationship with Matt. Do you think feelings of deep friendship and respect are enough to sustain a happy marriage? Love plays many roles, according to Poppy. What are love’s most important roles to you? Do you suspect the importance of these roles changes over time?

16. When Poppy sees Rico’s gunshot wound and learns that he tried twice to escape East Germany, she says, “I should have waited.” Of course, waiting for him in Italy would have been futile; he was never able to successfully escape. Why does Poppy say this? What is she feeling in that moment? The Berlin Wall came down in 1989, yet Rico and Poppy remained separated. Why didn’t Rico try to find Poppy then? Why didn’t she reach out to him?

17. Star-crossed is defined as “of a person or plan, thwarted by bad luck.” In what ways are Rosa and Poppy star-crossed? Could either sister have changed her fate had she tried harder? Poppy collects and distributes lucky coins. What significance does this have in the story? Does Poppy believe in luck? Would Poppy consider herself a lucky or unlucky person? Would you agree?
Learn More About The Star-Crossed Sisters of Tuscany
print

With Love from London

One Night on the Island

The Bookshop of Second Chances
Back to Top