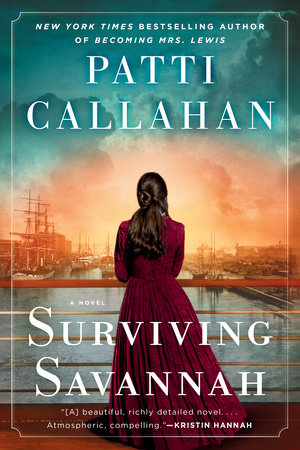 1.   Did you know about the sinking of the Pulaski before you read this book? Why do you think that stories like this get lost to time? What surprised you most when you learned about this shipwreck?

2.   The stories of the Pulaski sinking were part of Everly’s childhood. Her grandfather told and retold the story—adding bits and pieces of mythology and lore. Do you have family stories that are part of your heritage that have changed over time?

3.   The Longstreet family (inspired by the true Gazaway Bugg Lamar family) boarded the ship all together. In hindsight, knowing the dangers of steamboat travel, should they have traveled separately? Were they taking unnecessary risks? Did you ever blame Lamar Longstreet (Gazaway Lamar)?

4.   Augusta writes “If not for the tragedy . . .” and then she lists the things in her life that she cherishes; this is how she makes meaning out of something so awful. How do we make meaning of tragedy? How have you done this in your own life?

5.   Much of this novel is about the kind of person someone becomes after a tragedy. We learn early on that Charles Longstreet (inspired by Charles Lamar, a real person) survived the explosion and the five days and five nights at sea. Twenty years later, he earned the nickname “the Red Devil.” What did you make of this? Do you know anyone who survived something terrible only to become someone who did horrific harm to others? Why, or how, do you think that might happen?

6.   Maddox Wagner tells Everly: “Not everyone who survives trauma becomes a better person. The idea that surviving brings everyone to a new and better place is a lie told by people who need the world to make sense.” Do you agree with this? Have you or a loved one been through something that makes this statement ring true or false?

7.   The city of Savannah is an integral part of the story—a character in its own right. Is there a city that is important to you? Does its tragedies and triumphs shape it? Do you believe that if you love a city, you must care about its complicated history?

8.   Everly has been through her own loss and tragedy, and her grief has impacted her ability to engage or “thrive” in life. How do you think that working on the Pulaski’s curation and learning about the women who were on the ship affected her? Does learning about other people’s stories help us to understand our own? Do you seek out stories that are similar to yours? Or that are different?

9.   How does the time period (1838) affect the rescue of those who survived the explosion? How might this story be different today?
10. What do you think of the portrayal of enslaved people in this novel?

11.  One of the most heartbreaking scenes in the novel is when Augusta must choose between Charles and Eliza. How did this affect Charles’s story later in life? How did you feel when you read it? Did you wonder what you would have done?

12. Everly insisted on diving even though Maddox had a bad feeling about it. When Everly is narked on her dive, she hallucinates and sees her best friend. How does this impact her choices? Why do you think she felt she must see “what is below”? What is the difference between her desire to stay alive and her desire to live?

13. Everly blamed herself for Mora’s death, believing that she caused Mora to stand in the path of the oncoming car. How does guilt impact grief? Why do you think we blame ourselves when we really had no control?

14. The shipwreck was found 180 years later, and divers brought up the artifacts—in both the real-life story of the Pulaski and in this novel. What was the most interesting artifact for you? What do almost-200-year-old artifacts tell us about the people who boarded that ship?

15. What did you think of the endings for the three women—Everly, Augusta and Lilly—who narrate the novel? Which of the three women do you identify the most with? Did you expect their endings? Would you change any of them? Which part of their stories touched you the most? Which part challenged you?
Learn More About Surviving Savannah
print

The Last Train to Key West

All the Flowers in Paris

Eternal
Back to Top