Shot in the Heart Reader’s Guide 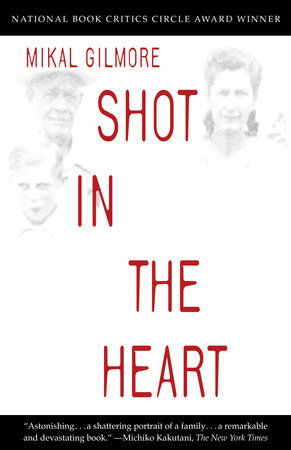 Shot in the Heart Reader’s Guide

Gary Gilmore, the infamous murderer immortalized by Norman Mailer in The Executioner’s Song, campaigned for his own death and was executed by firing squad in 1977. Writer Mikal Gilmore is his younger brother. In Shot in the Heart, he tells the stunning story of their wildly dysfunctional family: their mother, a blacksheep daughter of unforgiving Mormon farmers; their father, a drunk, thief, and con man. It was a family destroyed by a multigenerational history of child abuse, alcoholism, crime, adultery, and murder. Mikal, burdened with the guilt of being his father’s favorite and the shame of being Gary’s brother, gracefully and painfully relates a murder tale “from inside the house where murder is born… a house that, in some ways, [he has] never been able to leave.” Shot in the Heart is the history of an American family inextricably tied up with violence, and the story of how the children of this family committed murder and murdered themselves in payment for a long lineage of ruin. Haunting, harrowing, and profoundly affecting, Shot in the Heart exposes and explores a dark vein of American life that most of us would rather ignore. It is a book that will leave no reader unchanged.

1) Families often share private legacies and myths. The Gilmore children grew up hearing family secrets and stories, from the abandonment of their father by Houdini to the dramatic tale of a public hanging witnessed by their mother as a young girl. Discuss the impact of these stories on the life of each parent, and on the life of each of the four boys: Frank, Gary, Gaylen, and Mikal.

3) Was this story fated? If so, why? What do you see as the various key turning points in Gary’s development from innocent child to cold-blooded murderer? What were some possible actions or developments–or turns of fate–that could have saved this family from its violent and tragic course?

4) Children often act out the unexpressed fears and desires of their parents. Give examples of this from Shot in the Heart or from your own experience.

5) What was the most significant difference between the family Mikal grew up with and the one his brothers experienced?

6) Mormonism is the predominant religion originating in America, and is among the fastest growing religions in the world. Is the Mormon religion quintessentially American? If so, why?

7) As a system of beliefs, religion can have the dramatic ability to shape our perceptions of the world. What impact can religious differences have on a marriage? How were these differences handled between Mikal’s Catholic father and his Mormon mother?

8) Gary Gilmore was first incarcerated at age fourteen. What was the impact of reform school on Gary? On Gaylen? Are reform schools substantially different today than they were in the 1950s? Discuss the advisabililty of incarcerating youthful offenders. Is getting tough on young criminals a deterrent to crime or a further conditioning agent to crime?

9) Frank and Gary Gilmore were only a year apart in age yet Gary spent most of his life in prison and became a vicious murderer, while Frank went to prison as a conscientious objector who refused to even pick up a gun. Why do you think this was so?

10) How has juvenile deliquency evolved in our society since the 1950s? How has the criminal justice system adjusted to this evolution?

11) Is there a difference between rural violence and urban violence? Which one would you expect to be more violent, and why?

12) We traditionally think of the death penalty as a deterrent to crime. Is it possible that capital punishment was an incentive for Gary Gilmore to murder?

13) What impact does the media coverage of crime have on society?

14) What rights of privacy do families possess when it comes to child rearing methods? What forms of abuse require intervention, and at what point is intervention by outsiders (teachers, neighbors, counselors) acceptable and even necessary?

15) What are acceptable methods of punishing children? What do you know about child-rearing practices in other cultures?

16) Who is to blame when an individual commits an act of violence? The individual? The family? Society? How do we allocate responsibility?

Learn More About Shot in the Heart
print

A Rip in Heaven

Life After Death
Back to Top