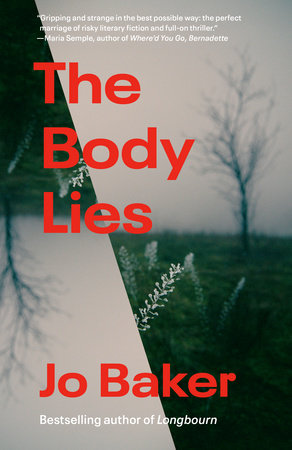 The questions, discussion topics, and reading list that follow are intended to enhance your reading group’s discussion of The Body Lies, the dark, thrilling new novel from bestselling author Jo Baker.

When a young writer accepts a job at a university in the remote English countryside, it’s meant to be a fresh start, away from the bustle of London and the scene of a violent assault she is desperate to forget. But despite the distractions of her new life and the demands of single motherhood, her nerves continue to jangle. To make matters worse, a vicious debate about violence against women inflames the tensions and mounting rivalries in her creative-writing class. When a troubled student starts turning in chapters that blur the lines between fiction and reality, the professor recognizes herself as the main character in his book—and he has written her a horrific fate. Will she be able to stop life imitating art before it’s too late? At once a breathless cat-and-mouse game and a layered interrogation of the fetishization of the female body, The Body Lies gives us an essential story for our time that will have you checking the locks on your doors.

1. As readers, we never discover the main character’s name. Why do you think Jo Baker decided to keep her anonymous? How does an unnamed narrator bring greater significance to the story?

2. In the first chapter, the main character experiences a violent sexual assault. In the chapters that follow, how does she process this attack, both consciously and unconsciously? What role does fear play in the narrator’s development? What different choices would she have made had she not been assaulted at the beginning, if any?

3. It doesn’t take long for the reader to see Nick’s obsession with his creative writing teacher. Where does Nick’s obsession stem from? Why is the narrator conflicted about what to do rather than immediately reporting his inappropriate behavior?

4. What does Nick mean when he says, “I’ll only write what happened…I’ll only write the truth?” Although Nick’s view of the world is troubling and much different from his classmates and teacher, is it still true? Is he capable of seeing the truth?

6. How did reading the students’ writing samples change or enhance your understanding of the characters?

7. The narrator struggles to find her voice after the assault and is further silenced by the massive workload at the university. How does she attempt to use her voice? What do you think this reveals about modern womanhood today?

8. How did you see gender politics play out in the university setting? What is the significance of the narrator’s overbearing boss and absent coworkers?

9. For most of the novel, the narrator is alone in her country house with no one but her son, Sammy. What role does fear and loneliness play in her new life of single motherhood and in the choices she makes?

10. How does the narrator’s trauma, both physical and psychological, affect her relationships—with Mark, Sammy, her boss, her students, herself?

11. Discuss the meaning behind the title The Body Lies. Does it have a double meaning? How did your understanding of the title’s meaning evolve as you read?

Jo Baker was born in Lancashire and educated at Oxford University and Queen’s University Belfast. She is the author of the bestselling novel Longbourn, as well as A Country Road, A Tree; The Undertow; The Telling; The Mermaid’s Child; and Offcomer. She lives in Lancaster, England.
Learn More About The Body Lies
print

Places in the Dark

Vienna Twilight
Back to Top