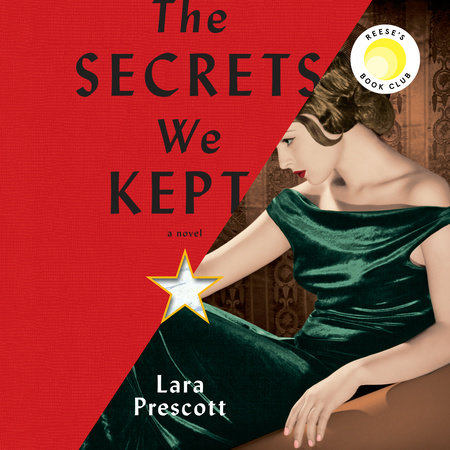 The questions, discussion topics, and other material that follow are intended to enhance your group’s conversation of Lara Prescott’s The Secrets We Kept, an intensely dramatic, eye-opening fictionalized account of the inner workings of the CIA during the height of the Cold War, told through the eyes of the women who made the Agency run as typists and spies, and specifically as the revolutionary novel Doctor Zhivago threatened to upend the Soviet regime—and the hearts of those involved in its creation and dissemination.

1. Compare the way the men and women in the book go about their work of secret-keeping. How do societal gender roles determine who does what and who is acknowledged for their work in public? In your opinion, do the men or women wield more power?

2. For the main women in the book—Olga, Irina, and Sally—secret-keeping incurs different punishments and rewards. Who do you think suffers and sacrifices the most? Who winds up most “successful”?

3. Throughout the book, we read of Olga’s unsent letters to one of her interrogators in the Gulag, the prison where she’s sent for her association with Boris Pasternak. Were you surprised by her loyalty to him in spite of the immense suffering she endures? How, in her own way, does she use those letters to express the kind of truth about love and oppression that Boris does in his novel?

4. Sally describes herself as having “one of those faces—the wide eyes, the ready smile that suggested I was an open book, someone who had no secrets to keep, and if she did, wouldn’t be able to keep them anyway” (63). How do she and the other women in the book transform themselves in order to keep so many secrets? How are these guises reflected in the structure of the novel itself? Consider the changing first-person points of view and the names of the chapters.

5. Major historical events, including Stalin’s death and the launch of Sputnik, are recalled through the eyes of the characters in highly charged environments. If you lived through these events yourself, how did their depiction in the novel impact your understanding of them? If you didn’t, how did their depiction shed light on what it was like to experience them first-hand?

6. Have you read Doctor Zhivago? If so, what elements of that love story do you see recurring in The Secrets We Kept? And even if you haven’t read it, were you able to glean how the balance of political commentary and romance contributed to the stir it caused in the world at the time of its publication?

7. Did you agree with Boris’s decisions first to share the novel with the Italian publisher, and then decline the Nobel Prize? Why or why not?

8. Although Irina believed she failed her interview for the typist job, she explains that “they [had] seen something in me that I hadn’t seen myself . . . For the first time in my life, I felt as if I had a greater purpose, not just a job. That night, something unlocked in me—a hidden power I never knew I had” (116). Do you believe she uses this power for good? Do you think she came away from her position grateful for the power she discovered?

9. The chapters narrated by the typists form a kind of Greek chorus anchoring the book in their shared experience—a collective point of view that’s both inside and outside the deepest truths of the CIA. Of the course of the novel, how do the limits of their knowledge manifest themselves? What might this suggest about the nature of truth itself, and how complete it can really be? What is the hierarchy of secrecy inside and outside the Agency?

10. Sally states that becoming someone else for her work, that taking on a given persona is “the best part . . . [But] to become someone else, you have to want to lose yourself in the first place” (186). How does she embody this desire to erase a former identity, and who else in the book shares this feeling?

11. Describe Teddy’s attraction to Irina and to his job at the Agency. Did you get the impression that he really knew what he wanted out of his life? How are his passions for literature (and Russian literature in particular) satisfied or disappointed by what unfolds during the course of the novel?

12. Discuss how taboo influences the main love affairs in the book. Does any character find true satisfaction or happiness in traditional romantic arrangements (namely, heterosexual marriage), and how do these relationships contribute to the theme of secrecy in the novel?

13. Olga’s children, Ira and Mitya, are both victims of their mother’s choices in love and politics. How does she navigate her identity as a woman and a mother, and the obligations and desires that come with it? Would you have made the same choices she did when it came to staying with Boris? Consider her recognition that “I thought of my children knowing, so young, that love sometimes isn’t enough” (243).

14. Discuss the author’s choices to use first-person, second-person, and third-person narrators for different chapters in the book. What do those choices suggest about the relative importance of the characters, and how close she wants us to get to them?

15. “We go on because that’s what we have to do,” Olga tells Boris when he is contemplating suicide (294). How do the events of the novel speak to this kind of endurance? Who takes up the charge to go on, and who isn’t able to?

16. Describe your experience of reading about the dissemination of Doctor Zhivago at the World’s Fair. What emotions and physical feelings came up as this dangerous property was passed from hand to hand? If you were living in the time of the novel, do you think you would have sought it out knowing the implications of reading it?

17. Discuss a book, film, piece of music, or other art that has profoundly shaped your experience of current events at any point in your life in the way Doctor Zhivago does for the characters. How did that piece reflect back to you concerns about how you lived your life at the time? Did it change your behaviors or lifestyle at all?

Learn More About The Secrets We Kept
print
Back to Top