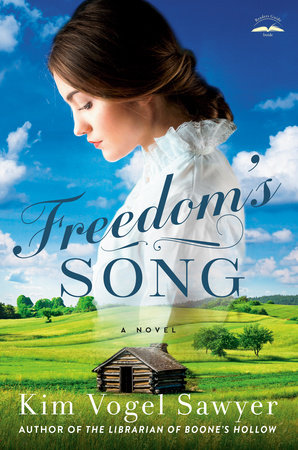 
1. Fanny’s plunge from the riverboat into the Mississippi River sent her on a journey she never could have imagined. Has an unexpected, unpleasant experience ever sent you in a different direction? Could you see God’s hand in the experience?

2. Sloan tricked Fanny’s father into signing a thirty-five-year commitment of service. Because Sloan duped the family, was Fanny obligated to fulfill the agreement? Why or why not?

3. Fanny unwittingly became caught up in an Underground Railroad operation. She didn’t have to stay with Enoch and his family. Why do you think she chose to do so?

4. Walter branded himself a coward because he had run in fear from the bullies who’d tormented him during his childhood. Was this a fair designation? Why or why not? Have you ever placed a certain “brand” on yourself? How can we keep from defining ourselves negatively and instead view ourselves through God’s eyes?

5. Sloan grew up in a home with few material possessions but a great deal of love. Why do you think he was dissatisfied with his life? How did scriptures and spoken words from his past affect him as he sought a new singer? Have you ever been influenced by remembered words from the Bible or a loved one? In what way?

6. When Fanny heard a young child crying, why did she decide to investigate? If you heard a child in distress, how would you respond?
7. After deciding to let Fanny go, Sloan considered contacting his parents. Do you think he followed through with it? What kind of reception do you think he received?

8. Freedom is a theme throughout the story—Fanny’s freedom from Sloan, Enoch and his family’s freedom from bondage, and Walter’s freedom from a cloak of fear. Ransom told Fanny, “I’m free because Jesus forgave my sins.” Later, Fanny realized she would still be free even if held captive again by Sloan. What is the difference between physical freedom and spiritual freedom? Have you found freedom in Christ? How has it affected you?
Learn More About Freedom’s Song
print

No Ocean Too Wide
Carrie Turansky

A Sound Among the Trees
Susan Meissner

The Girl in the Glass
Susan Meissner

By Any Other Name
Lauren Kate

Strength in the Storm
Laurel Blount