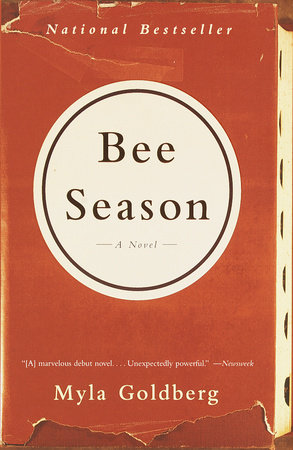 The discussion topics, questions, and suggestions for further reading that follow are designed to enhance your group’s reading of Myla Goldberg’s Bee Season, a beautifully crafted portrait of an American family torn asunder when eleven-year-old Eliza defies everyone’s expectations by blossoming into a championship speller.

Like most families, the Naumanns have settled comfortably into a routine, each member playing an accepted role in the day-to-day family drama. Saul, a cantor who devotes himself to the study of Jewish mysticism, is the family anchor, preparing the meals, running the household, and nurturing his son Aaron’s interest in Judaism. Miriam, a brilliant and compulsive high-powered lawyer, slips easily into the role of wage-earner, happy to leave the emotional demands of family life and parenting to her husband. Smart, socially isolated, and physically awkward, teenager Aaron thrives under his father’s attention, relishing their shared scholarly pursuits and secure in the knowledge that he will become an eminent rabbi. Amid this dazzling display of intellectual power and intensity, Eliza, an unremarkable fourth-grade student, is resigned to remaining in the shadows. But her surprising triumph in a classroom spelling bee and her ascent to the national championships launch Eliza into the spotlight, radically altering the family dynamics.

Saul is soon lavishing time and affection on Eliza, leaving Aaron desperate to find something to replace the connections–to his father and his faith–that have sustained him. For Miriam, the sudden emergence of her daughter’s ability to apply the concentration and the desire for perfection that define her own self-image triggers a flood of contradictory emotions and sends her life spiraling out of control. And, as her studies with her father escalate beyond simple word drills to explorations of the writings of one of history’s greatest kabbalists, Eliza discovers that her talent for spelling opens the door to far more mysterious gifts.

Myla Goldberg chronicles the details of the Naumanns’ suddenly unsettled world–the subtle interplay between an estranged husband and wife, the love-hate relationship of two siblings, the shifting loyalties of parent and child–with a wonderful mixture of humor and compassion. In disclosing the joys, confusions, and pain of a young girl’s coming-of-age, she uncovers the hidden longings that shape–and sometimes destroy–the delicate fabric of family life.

1. Eliza Naumann has "been designated . . . as a student from whom great things should not be expected" [p. 1]. How does Myla Goldberg use both humor and poignancy to bring home the impact of this judgment on a child? Does Eliza accept her "mediocrity" without question? What evidence is there that she resents (or is frustrated by) the way the teachers and other students, as well as her own family, perceive her?

2. Why does Eliza slip the information about the district spelling bee under Saul’s door, rather than telling him about it in person? Is her behavior unusual for an eleven-year-old? How do Aaron’s and Saul’s reactions to Eliza’s winning the district bee and moving on to the regional finals [p. 43] shed light on Eliza’s own feelings about the significance of her newly discovered talent?

3. Initially, Saul is portrayed as an involved and caring father. What hints are there that his interest in his children’s lives masks a need to satisfy his own ego? How does his relationship with Miriam enhance the image he has created for himself? Is Miriam in some ways a victim of Saul’s determination to take the primary role in the family or is she equally responsible for the pattern they have established? In what ways do the dynamics of the Naumanns’ marriage reflect the times in which they live?

4. Before the depth of Miriam’s problem is revealed, how do you respond to her as a character? Do her ostensible involvement with work and her treatment of her children make her a "bad" mother? What incidents, if any, demonstrate that at some level she wants to express her love for Eliza and Aaron?

5. Are the interactions between Aaron and Eliza typical of sibling relationships, or are they closer than most brothers and sisters? If so, what contributes to their closeness? At what point does the pattern they have established begin to change?

6. "Saul Naumann spends the first portion of his life as Sal Newman, son of Henry and Lisa Newman, decorator of Christmas trees and Easter eggs" [p. 10]. When he embraces Judaism as a teenager under his mother’s guidance, Saul becomes estranged from his father. What effect does Saul’s childhood have on how he approaches parenting and the goals he sets for Aaron? As the only child of a wealthy couple who wanted a large family, Miriam is raised to fulfill all her parents’ expectations. What does Saul offer her that her own parents were unable to provide? Goldberg writes, "The two bond over their mutual lack of family ties" [p. 22]. How do their assumptions about marriage and, later, their behavior with Eliza and Aaron belie the notion that they are free of the legacies of their own parents?

7. In addition to his desire to achieve a higher level of spirituality, why does Saul devote so much time to his studies of Jewish mysticism? Do his retreats into his study serve another purpose, either conscious or subconscious, in his life? Is the time he spends with Aaron early in the book and later with Eliza compensation for–or relief from–his self-imposed isolation?

8. Discuss the development of Eliza’s enchantment with spelling. Is she driven by more than just the desire to please her father? How does the author use metaphors and other literary devices to extend the meaning of what is happening to Eliza at each stage? For example, what does Goldberg mean by the sentence, "When Eliza studies, it is like discovering her own anatomy" [p. 44] and her descriptions of Eliza’s delightful characterizations of each letter [p. 49]?

9. When Eliza triumphs at the Greater Philadelphia Metro Area Spelling Bee, Miriam is struck with a sense of pain as she "realizes too late that she has made her daughter more like her than she ever intended" [p. 59]. Saul, in contrast, feels gratitude and humility; he "would like to think he has kept his distance in order to protect his daughter from his unfulfilled hopes" [p. 61]. Is this self-deception on Saul’s part? How do you think Eliza would respond to her parents’ feelings?

10. Why is Eliza’s failure to appreciate Miriam’s gift of the kaleidoscope so devastating to Miriam [p. 67]? Would the situation have been different if Miriam had explained its importance to her? Why doesn’t she?

11. Eliza’s transformation from ordinary student into nationally recognized spelling prodigy undermines the roles Aaron and Miriam have always assumed in the family and sets in motion events that destroy the Naumanns’ fa?ade of contentment and normalcy. Is there a common thread that links Aaron’s experiments with different religions, Miriam’s secret excursions, and Eliza’s plunge into Jewish mysticism? In what ways do each of their quests embody the Jewish principle of Tikkun Olam, "the fixing of the world" [p. 87]? What parallels are there between the rituals they perform, the risks they take–and the revelations they receive?

12. What does Miriam’s sudden sexual aggressiveness symbolize? What does it represent in terms of her feelings about Saul and their marriage? How is it related to the other signs of her increasing recklessness? Despite his discomfort and shock, why is Saul reluctant to discuss it, choosing instead to sleep in his study? Why does he convince himself "that he is there for Eliza’s sake" [p. 186]? What are other examples of his unwillingness to face the profound changes occurring in the family?

13. Eliza masters arcane skills and grasps mysteries that few people in history have even dared to examine, yet she remains a typical little girl in many ways. How does Goldberg bring this to life in her descriptions of Eliza’s thoughts and actions? She writes, "Abulafia’s words speak to Eliza like a promise" [p. 195]. How do Eliza’s studies, of both spelling and mysticism, relate to the concrete facts of her life and the promises she hopes will be fulfilled?

14. Describing Saul’s reaction to the room Miriam has constructed, Goldberg writes, "Saul starts finding it difficult to breathe. . . . When Saul starts to cry, it is out of this sense of supersaturation as well as having arrived at a new level of understanding" [p. 225]. Does Saul live up to this "new level of understanding" when he sees Miriam at the hospital [pp. 235- 236]? When he discusses the situation with Eliza and Aaron?

15. How does Eliza’s final act shed light on her character and the changes she has undergone in the course of the novel? Is it an act of defiance or of resolution?

16. Bee Season presents the narrative viewpoints of all the family members. How does this technique add depth and nuance to our understanding of each character? How do the self-portraits differ from the portraits, implicit or explicit, sketched by the other members of the family? Which characters become more sympathetic or appealing through this juxtaposition of perspectives and which ones become less so?

17. The book opens with quotations from the mystic Abulafia and spelling champion Rebecca Sealfon. It is clear how they relate to Eliza’s life; in what ways are they relevant to the other characters in the novel and the themes Goldberg explores?

Shortly after reading about spelling bees in an essay in Granta, a friend of mine told me of a fairly traumatic spelling bee experience. I became obsessed with spelling bees and how they can take on such great significance to the children and the parents involved in them. My feelings were confirmed when I traveled to Washington, D.C., for the 1997 National Spelling Bee. In the two days I spent there watching the bee, interviewing some of the contestants and eavesdropping, I felt I had entered an alternate universe of anxiety and expectation ruled by one of the most arbitrary of systems: the English language. While some of the kids were actually having fun, it became quickly apparent that the spelling bee was pathologically important to a tangible percentage of contestants and parents. Though I was never an active spelling bee participant myself, I recognized in these kids my own childhood imperative to fulfill expectations and live up to my potential. I realized that part of my own fascination with the spelling bee–and part of the reason I think it makes the national news and is televised on ESPN every year–lies in the fact that it is so easy to recognize ourselves in these kids and in this ridiculous contest. We have all felt the desire to please or to succeed against irrational odds. We have all felt what it is like to fail. The universals, underlying what at first sight seemed like such an odd niche of humanity, were a large part of what powered the 18 months it took to write Bee Season.

Myla Goldberg on Myla Goldberg
I grew up in Laurel, Maryland, where, in fifth grade, I lost my first and only spelling bee with the word "tomorrow." After graduating from Oberlin College, I spent a year living and writing in Prague, where I taught English to psychotherapists, insurance salesmen, and former Communist officials. Upon returning to the U.S., I moved to New York City. My complete inability to hold down a regular job led me to a freelance career as a reader for television movies. I now write full-time in Brooklyn, where I live with my husband.
Learn More About Bee Season
print
Back to Top