Prisoners of the Castle Reader’s Guide 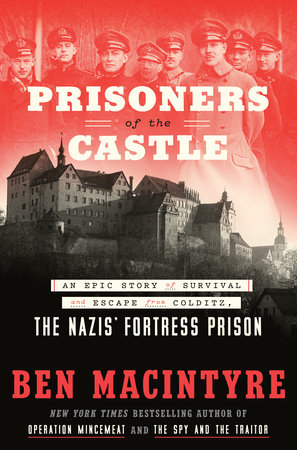 Prisoners of the Castle Reader’s Guide

1. Had you known about Colditz before reading Prisoners of the Castle? What surprised you most about this book? Did the story defy your expectations? Was there anything about World War II that you learned, especially about the lives of POWs? Please explain.

2. Which prisoners resonated with you most, and why? Who was the most courageous, the most obnoxious, the funniest, and the most tragic?

3. Do prisoners of war have a moral duty to escape? Why or why not? Are there particular circumstances that might affect your answer?

4. Tunneling out. Rappelling down ramparts. Walking through front gate disguised as a German soldier. Which method of escape most impressed you, and why? Which method would you choose, and why?

5. Name three qualities that you believe best help someone survive being a POW. Explain why you chose them.

7. Prisoners of the Castle seamlessly moves between intense drama, daring adventure, a bit of romance, and unexpected moments of comedy. How do you think this enriches the reading experience? Which parts did you like most?

8. Were you surprised that class structures and ranks remained intact among the prisoners at Colditz? Why do you think this was the case? In your opinion, did these categories and hierarchies help or harm POWs?

9. There were many heroes outside Colditz, including a “perfectly ordinary” (in the eyes of the Nazis) Polish housewife who was actually an agent of British intelligence; a sawmill worker who became “the most prodigious inventor of escape equipment in history”; the dental assistant (and lover to a Czech fighter pilot) who, surprisingly, was also a spy; and the Swiss official assigned to make sure the Germans complied with the Geneva Convention. Which most inspired you, and why?

10. Were you surprised to learn that the German authorities adhered to the Geneva Convention in Colditz? In your view, can “rules of war” have a significant mitigating effect on wartime atrocities, or do you think any effect is purely arbitrary?

11. A man of conviction with an impeccable sense of duty, Birendranath Mazumdar faced a different set of challenges at Colditz and beyond. Despite being a committed Indian nationalist, Mazumdar came to Britain’s defense and joined the British Army when war was declared, proving heroic under fire. How do you explain the way he was treated by his own side both during captivity and after he escaped? Was it solely because he was a person of color, or were there factors in addition to racism? How do you think he persevered in the face of such adversity?

12. At Colditz, “reading matter was supplied via the Red Cross, and Penguin Books set up a system whereby . . . individual prisoners received a monthly parcel containing a selection of ten books.” What would your ten books be?

13. Did you think that the British prisoners should have gone through with the execution by hanging of traitor Walter Purdy? Why or why not?

14. How did you feel about the fate of Germany’s Leutnant Reinhold Eggers (supreme security chief of Colditz) at the hands of the Russians?

Learn More About Prisoners of the Castle
print

Last Call at the Hotel Imperial

A Perfect Spy
Back to Top