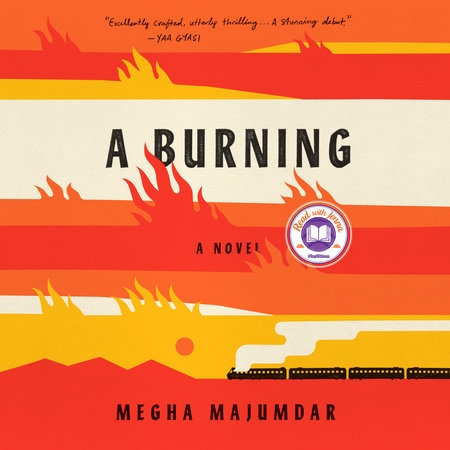 The questions, discussion topics, and reading list that follow are intended to enhance your reading group’s conversation about A Burning, the electrifying debut novel from Megha Majumdar.

1. In A Burning, Jivan’s social media usage ultimately leads her to become a victim of the state. Consider her statement: “If the police didn’t help ordinary people like you and me, if the police watched them die, doesn’t that mean . . . that the government is also a terrorist?” (pp. 5–6). How does this messaging reverberate throughout the novel? How is social media used both as a tool of activism and as a tool of repression in our current society? Have you ever felt at risk expressing your opinions on social media?

2. Why do you think Lovely dreams of becoming a movie star? How does this ambition relate to the instances of disrespect she faces in public, as well as to the ceremonies at which she is welcomed?

3. Shortly after her arrest, Jivan states: “A woman like me is never believed” (p. 22). Discuss the import of this statement for the overall narrative. What assumptions are made about Jivan based on her religion? Her socioeconomic standing? How does she try to defy societal expectations throughout her life?

4. Consider your initial impression of PT Sir. How would you describe his day-to-day life before he attends the rally? How did the rally change his point of view on political engagement?

5. Consider the two interstitial chapters that are written from the vantage point of Jivan’s mother and father. Why do you think the author chose to include these two brief scenes? How do they contribute to the emotional impact of the narrative? Describe Jivan’s relationship with her parents.

6. Discuss Jivan’s choice to involve a journalist in sharing her story. What are her initial impressions of Purnendu? Describe her childhood and the incidents that Purnendu chose to highlight. What does the tone of the final article imply about truth and narrative?

7. Consider the conditions of Jivan’s imprisonment. How does she conduct herself in her day-to-day life? Describe her relationship with the other incarcerated women. How does Jivan’s decision to bribe Americandi weigh on her conscience?

8. Throughout A Burning, there are scenes and moments in which a culture of violence against women is brought to the forefront. How do women in the novel navigate this expectation of violence and misogyny? How do they resist it?

9. Education plays an integral role in A Burning. How is the education system described? Consider PT Sir’s role within it and Jivan’s experience in his school. How does the act of learning English become a form of empowerment for her? For Lovely?

10. Discuss “Interlude: The Villagers Visit the Beef-Eater.” How did this scene affect you as a reader? Consider how anti-Muslim rhetoric and action is depicted in the novel. What does the state’s indifference to this violence imply about the relationship between justice and power?

11. At several points in the novel, Jivan discusses her aspirations to become middle class. Describe the conditions of her childhood and how they are depicted in the narrative. What are some of Jivan’s earliest moments of class consciousness? What does being “middle-class” mean to her at different points in her life?

12. On page 98, Lovely states: “In this life, everybody is knowing how to give me shame. So I am learning how to reflect shame back on them also.” When does Lovely feel most comfortable in her identity? At what points does she seem to feel the most shame in the novel?

13. At several points in the novel, the reader witnesses characters become morally flexible as they strive to achieve personal goals. Who, in your opinion, is the most morally reprehensible?

14. What was the most surprising aspect of the novel? How did your understanding of various characters change over the course of the novel?

15. A Burning is a novel that meditates on issues of power and agency. How does power change PT Sir? Lovely? At what moment is Jivan most empowered? Did you find that this book helped you think about injustice, power, and agency in your own life and community? How so?

Learn More About A Burning
print

If I Had Your Face

A Fine Balance
Back to Top