Not a Happy Family Reader’s Guide 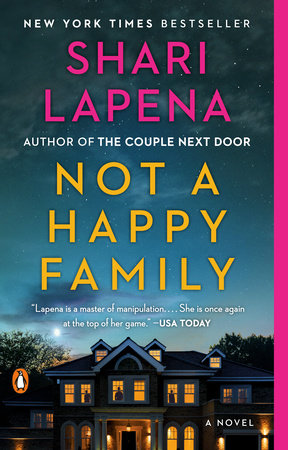 Not a Happy Family Reader’s Guide

1. Catherine, Dan, and Jenna each stand to inherit millions when their parents die, and each has their own difficult relationships with other members of the family. Did you suspect one of the Merton children could be behind the murder of their parents, or did you think it was someone else? Explain who and why.

2. Most of, if not all, the characters are unlikable in some way. Despite that, their flaws make them seem more human. Did you find any one character more relatable than the others? Why or why not? Discuss.

3. Shari Lapena is known for incorporating many twists and turns in her novels. Did you anticipate how the story would unfold? What did you guess correctly, and how did you know?

4. Current housekeeper Irena, originally hired as the nanny for the Merton children, has been working for the family for decades. She, too, will inherit a significant sum when Fred and Sheila’s wealth is divided, as will Fred’s sister, Audrey. In their own way, both Irena and Audrey are outsiders to the Merton family—Irena as their employee and Audrey as the much-despised relation—and each plays an important role in the novel. Do you think the detectives handled their investigations into the two women in the right way? Discuss.

5. As the novel goes on, more information is revealed about the motivations of each character as we witness their interior thoughts and their assumptions about the others. Did your feelings toward anyone shift as you read? If so, how?

6. Rose and Catherine have a complicated relationship that only grows more challenging as a certain truth about Rose comes to light. Of the two women, who were you siding with most and why? Did your sympathies toward one of the women change at any point?

7. Lapena uses short chapters to keep the momentum propulsive and to leave readers with cliff-hangers before shifting to a new point of view. Was there any one cliff-hanger or reveal that caught you particularly off guard or made you doubt what you thought you knew?

Learn More About Not a Happy Family
print

The House Across the Lake

The Love of My Life

The End of Her

Girl A
Back to Top