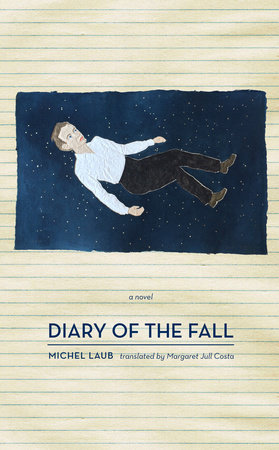 About Diary of the Fall

From one of Granta’s Best Young Brazilian Novelists, a literary masterpiece that will break your heart

At the narrator’s elite Jewish school in a posh suburb of Porte Alegre, a cruel prank leaves the only Catholic student there terribly injured. Years later, he relives the episode as he examines the mistakes of his past and struggles for forgiveness. His father, who has Alzheimer’s, obsessively records every memory that comes to mind, and his grandfather, who survived Auschwitz, fills notebook after notebook with the false memories of someone desperate to forget.

This powerful novel centered on guilt and the complicated legacy of history asks provocative questions about what it means to be Jewish in the twenty-first century.

Michel Laub was born in Porto Alegre and currently lives in São Paulo, Brazil. He is a writer, a journalist, and the author of five novels. Diary of the Fall is his first to be published in English, and has won the Brasilia… More about Michel Laub

“Finally, a novel about the relationship between Judaism’s past and present that explores new territory instead of adding yet another set of tired footprints to overworked ground. Diary of the Fall is a refreshingly honest and startlingly original book.” —Myla Goldberg, bestselling author of Bee Season and The False Friend

“Margaret Jull Costa’s achievement is nothing less than heroic.” —The Wall Street Journal

“Extraordinary…Knowledge is played with in this book, and the way in which Auschwitz has become a literary conceit, a literary cliché. It is about the globalisation of the Holocaust and that history.” Devorah Baum, judge for the JQ-Wingate Prize

“As much a novella as a novel, and as much a meditation as a novella, Laub’s first book published in English probes the emotional and psychological legacy a Jewish son inherits from his father and grandfather.” —Publishers Weekly

“A spare and meditative story that captures the long aftereffects of tragedy.” —Kirkus Reviews

“Brutal yet delicate…attempts to understand man’s basic identity, ‘part of a past that is likewise of no importance compared to what I am and will be.’” —Justin Alvarez, Paris Review blog

“[A] deeply satisfying novel…Michael Laub’s expansive story will haunt you long after you encounter the resolution.” —CounterPunch

“Michel Laub has constructed a painful, relentless and ultimately beautiful portrait of three generations, whose stories, told in parallel, culminate in the most innocent and surprising expression of love. A rewarding and excellent read.” —Martin Fletcher, author of Walking Israel, winner of the National Jewish Book Award

“Beautiful, profound, and masterfully structured….overflows with a lucid, sober, oddly uplifting wisdom. I was humbled by this book, amazed by Michel Laub’s ability to shuttle between three generations, to again and again confront the madness of his family’s unimaginable past in such a way as to recognize and respond to it in his own unruly present.” —Todd Hasak-Lowy, author of The Task of This Translator

“Michel Laub’s Diary of the Fall (translated by Margaret Jull Costa) is a powerful exploration of memory and guilt, drawing connections between a disastrous high-school prank and the Holocaust.” —The Guardian (UK)

“A gripping, thoughtful novel, fluidly translated…By focusing on an act of childhood brutality and its mundane consequences, Laub beautifully retrieves the tragedy of the holocaust from its scholarship, politics and deniers, cutting to the bone of human life, its longings and limitations.”—The Independent (UK)

“Laub makes an eloquent statement about the human condition, and how we can learn to live despite it.” —Bookslut

“Laub’s is a fine, complex piece of writing that examines questions of guilt and responsibility for crimes large and small, and how, if possible, to atone for them.” —New Statesman (UK)

“The remarkable quality of the book resides in its construction….Diary of the Fall’s long ribbons of prose create a work of immense incantatory power.” —Neel Mukherjee, Literary Review (UK)

“This riveting read challenges how we choose to tell others our life story and how events make us into the people we are.” —The Sun (UK)

“May well emerge as one of the finest novels published in English this year.” —Irish Times

“The best Brazilian writer of the new generation.” —Terra Magazine

“As with Milton Hatoum, in Michel Laub there is always…a subtle touch at the most dramatic moments.” —Estado de S. Paulo

“Even while reading it for the second time, the story held me captive.” —De Groene Amsterdammer

“Diary of the Fall is utterly convincing. It’s an original and thought-provoking exploration of the way history casts its ripples through generations.” —Bookmunch

“Laub’s prose is compelling, his ideas intelligent, and I devoured the book in a day. Let’s hope we see more of this fantastic Brazilian writer’s work in translation.” – Kate J. Wilson, One Day Perhaps You’ll Know Blog

“Beauty resides, almost discreetly, in the poetic plot [and] inviting, flowing prose … Therein lies Laub’s art, a style that seems to touch things without leaving a mark, without oppressing or disfiguring what is written.” —Vox

“A powerful novel.” —The Northern Echo

“A brutally honest reflection on the power that memory holds over us all.” —The Literary Review