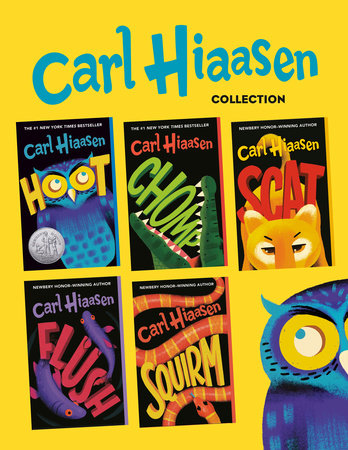 Take a trip to Carl Hiaasen’s Florida–where the animals are wild and the people are wilder–with this collection that includes Hoot, Flush, Scat, Chomp, and Squirm.

Hoot: Everybody loves Mother Paula’s pancakes. Everybody, that is, except the cute but endangered owls that live on the building site of the new restaurant. Can the awkward new kid and his feral friend prank the pancake people out of town? Or is the owls’ fate cemented in pancake batter?

Flush: The Coral Queen casino boat is treating the ocean like a toilet bowl, so Noah’s dad decides to sink the darn thing. Problem is, there’s no evidence of illegal dumping. Now Dad’s in the clink, the boat’s back in business, and only Noah can flush the truth out into the open.

Scat: The most terrifying teacher in school is missing in the Everglades, and it’s up to Nick and Marta to find her. But first they’ll have to reckon with a junior arsonist, a wannabe Texas oilman, and a ticked-off Florida panther. It’s all about to hit the fan, and when it does, these kids better scat.

Chomp: When Wahoo Cray’s dad–a professional animal wrangler–takes a job with a reality-TV survival show, Wahoo figures he’ll have to do a bit of wrangling himself to keep his father from killing the show’s inept and egotistical star. But the job keeps getting more complicated–and it isn’t just the animals who are ready to chomp.

Squirm: This summer, Billy will fly across the country, hike a mountain, float a river, dodge a grizzly bear, shoot down a spy drone, save a neighbor’s cat, save an endangered panther, and then try to save his own father. 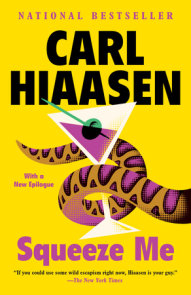 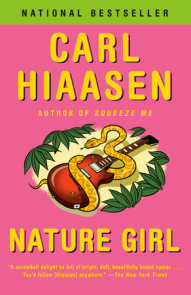 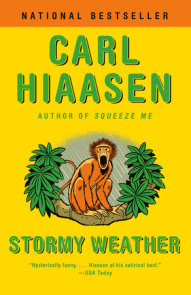 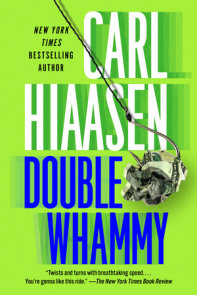 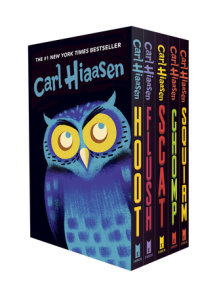 See all books by Carl Hiaasen