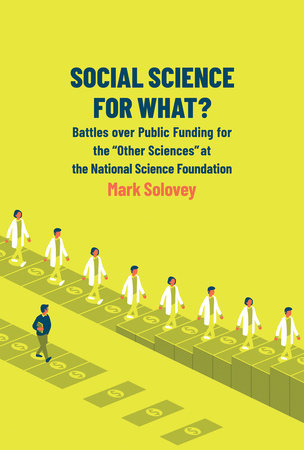 Social Science for What? 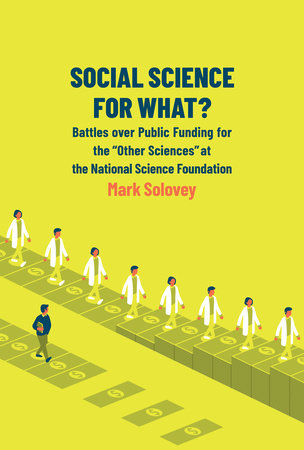 About Social Science for What?

How the NSF became an important yet controversial patron for the social sciences, influencing debates over their scientific status and social relevance.

In the early Cold War years, the U.S. government established the National Science Foundation (NSF), a civilian agency that soon became widely known for its dedication to supporting first-rate science. The agency’s 1950 enabling legislation made no mention of the social sciences, although it included a vague reference to “other sciences.” Nevertheless, as Mark Solovey shows in this book, the NSF also soon became a major—albeit controversial—source of public funding for them.

Solovey’s analysis underscores the long-term impact of early developments, when the NSF embraced a “scientistic” strategy wherein the natural sciences represented the gold standard, and created a social science program limited to “hard-core” studies. Along the way, Solovey shows how the NSF’s efforts to support scholarship, advanced training, and educational programs were shaped by landmark scientific and political developments, including McCarthyism, Sputnik, reform liberalism during the 1960s, and a newly energized conservative movement during the 1970s and 1980s. Finally, he assesses the NSF’s relevance in a “post-truth” era, questions the legacy of its scientistic strategy, and calls for a separate social science agency—a National Social Science Foundation.

Solovey’s study of the battles over public funding is crucial for understanding the recent history of the social sciences as well as ongoing debates over their scientific status and social value.

About Social Science for What?

How the NSF became an important yet controversial patron for the social sciences, influencing debates over their scientific status and social relevance.

In the early Cold War years, the U.S. government established the National Science Foundation (NSF), a civilian agency that soon became widely known for its dedication to supporting first-rate science. The agency’s 1950 enabling legislation made no mention of the social sciences, although it included a vague reference to “other sciences.” Nevertheless, as Mark Solovey shows in this book, the NSF also soon became a major–albeit controversial–source of public funding for them.

“This is the goto history tracing erratic NSF treatment of social science, which accounts for worrisome gaps in our science of the human dimensions embedded in current sociotechnological disruptive challenges. Solovey’s call for a fix is timely, and urgent.”
– Kenneth Prewitt, Carnegie Professor of Public Affairs, Columbia University

“An impressive account of the fortunes of social science within the American National Science Foundation (NSF). Buttressing and chronologically extending his treatment in his book Shaky Foundations (Solovey 2013), Solovey establishes the NSF’s importance as a funding agency for postwar social science and charts the recurring and rhyming challenges social scientists and their defenders faced within and around the foundation.”
– George Reisch, Metascience

“Solovey’s detailed narrative history offers the reader a wealth of insight into the dynamics underlying choices surrounding the public funding of social science research and lays the groundwork for many future investigations into the broader politics of social scientific knowledge.”
– Daniel Hirschman, Journal of the History of Economic Thought

“This book enables the reader to develop a much richer understanding of the NSF, which is not only one essential part of the federal science funding system but also the major source of federal backing for social sciences.”
– Jialu Xie, Minerva

“Solovey’s book represents a major contribution to the history of the human sciences in the United States duringthe 20th century.” ”A must read”
– Dennis Bryson, Centaurus

“An engagingly written and timely account of the struggle to win status and secure funding for the social sciences in the United States”
– Katherine Ambler, British Journal for the History of Science

“Solovey’s meticulous analyses of national political debates over the mertis of public funding for the social sciences in the U.S. have much to offer not only historians of science but scholars of Congress and public policy as well. Especially in this time of austerity, Solovey’s story of social scientists battling for a small and often shrinking silver of the NSF pie makes for sobering reading.”
– Emily Hauptmann, Journal of the History of the Behavioral Sciences

“[Social Science for What?] convincingly shows how powerful the scientistic view of the ‘fundamental unity of the sciences, often accompanied by an understanding that the natural sciences were the golden standard,’ has been in shaping the research, social and political trajectory of the social sciences in America.“
—Massimiano Bucchi, Public Understanding of Science

“[Social Science for What?] will be a go-to volume for those interested in the postwar development of the social sciences in the United States, and their intersection with policy and politics in this era. [ . . . ] [T]he book is definitive in its era.”
—Elizabeth Popp Berman, History of Political Economy

“Social Science for What? is a remarkably detailed history of the National Science Foundation (NSF) from 1945 to the late 1980s that makes a compelling case for the influence of the Foundation on American social science. [ . . . ] [A]n important contribution to the large body of work on Cold War scientific patronage.”
—Lucian Bessmer, History of the Human Sciences

“In the last twenty years or so, contemporary historian Mark Solovey has become one of the most highly esteemed scholars among those committed to reflecting on the history and the fate of the social and psychological sciences during and beyond the postwar period. In particular, he has been able to combine critical thinking on the Cold War era in general with more focused work on the network of public and private funders of the American social sciences during the Cold War. [ . . . ] Social Science for What? [is] a rich account of the place and the role of the social sciences in the NSF from the mid-1940s to the end of the 1980s.”
—Giovanni Zampieri and Matteo Bortolini, Sociologica

CONTENTS
Acknowledgments ix
INTRODUCTION 1
1 TO BE OR NOT TO BE INCLUDED: UNCOVERING THE ROOTS OF THE NSF’S SCIENTISTIC APPROACH 19
2 STAKING OUT THE HARD-CORE, FROM THE MCCARTHY ERA TO SPUTNIK 49
3 HELP FROM ABOVE: A MODEST FLOURISHING DURING THE LIBERAL HIGH TIDE, 1957–1968 79
4 TWO CHALLENGES, TWO VISIONS: THE DADDARIO AND HARRIS PROPOSALS 109
5 LOSING GROUND: MOUNTING TROUBLES DURING THE MORE CONSERVATIVE 1970S 135
6 MOMENTUM LOST: REORGANIZATION AND RETREAT, BUT NO RESPITE 167
7 DARK DAYS: SOCIAL SCIENCE IN CRISIS DURING THE EARLY REAGAN YEARS 207
8 DEEP AND PERSISTENT DIFFICULTIES: COPING WITH THE NEW POLITICS OF SCIENCE THROUGHOUT THE REAGAN ERA 237
9 ALTERNATIVE VISIONS: FRAGMENTATION BEHIND THE SCIENTISTIC FRONT 275
10 THE SOCIAL SCIENCES AT THE NSF: PAST, PRESENT, AND FUTURE 291
Notes 317
Index 379

Social Science for What?