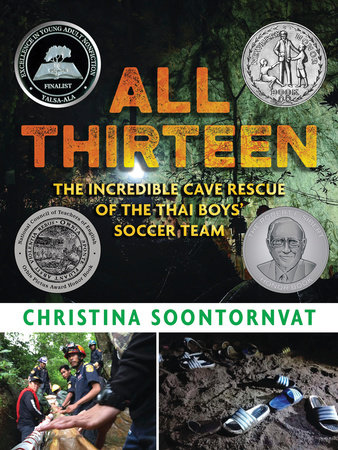 All Thirteen: The Incredible Cave Rescue of the Thai Boys' Soccer Team

About All Thirteen: The Incredible Cave Rescue of the Thai Boys’ Soccer Team

A unique account of the amazing Thai cave rescue told in a heart-racing, you-are-there style that blends suspense, science, and cultural insight.

On June 23, 2018, twelve young players of the Wild Boars soccer team and their coach enter a cave in northern Thailand seeking an afternoon’s adventure. But when they turn to leave, rising floodwaters block their path out. The boys are trapped! Before long, news of the missing team spreads, launching a seventeen-day rescue operation involving thousands of rescuers from around the globe. As the world sits vigil, people begin to wonder: how long can a group of ordinary kids survive in complete darkness, with no food or clean water? Luckily, the Wild Boars are a very extraordinary "ordinary" group. Combining firsthand interviews of rescue workers with in-depth science and details of the region’s culture and religion, author Christina Soontornvat—who was visiting family in Northern Thailand when the Wild Boars went missing—masterfully shows how both the complex engineering operation above ground and the mental struggles of the thirteen young people below proved critical in the life-or-death mission. Meticulously researched and generously illustrated with photographs, this page-turner includes an author’s note describing her experience meeting the team, detailed source notes, and a bibliography to fully immerse readers in the most ambitious cave rescue in history. 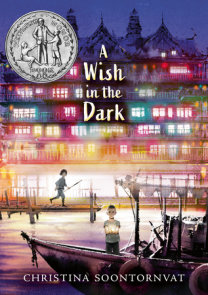 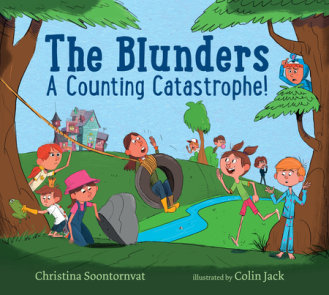 See all books by Christina Soontornvat

“The term page-turner gets tossed around a lot, but All Thirteen is the real deal. Even if you think you know this story, you won’t be able to stop reading.”
—Steve Sheinkin, award-winning author of Bomb and Undefeated

“All Thirteen is one of the best middle-grade nonfiction books that I have ever read. Even though I knew how this story was going to end, I found myself captivated from beginning to end. Christina Soontornvat did a marvelous job bringing this inspiring rescue to young readers.”
—Colby Sharp, cofounder of Nerdy Book Club

“A nonfiction marvel.”
—Minh Lê, award-winning author of Drawn Together

Soontornvat selects details and measures her pacing with the practiced hand of a master storyteller, and while everything is supported by meticulous research, the prose never suffers from information density; rather, every aside—whether on hypothermia, ketamine, or Navy SEAL training—adds tension through understanding. Readers who already know the outcome will nonetheless be enthralled by this singular tale that captures the importance of STEM education, the beauty of Thailand, and the best of humanity—collaboration, innovation, sacrifice, family, and love.
—Booklist (starred review)

In lucid prose written in third-person-present tense for a heightened sense of immediacy, Soontornvat gives readers a journalistic account of the difficulty and complexity of the rescue effort. Using interviews and other primary sources, she keeps a tight focus on the unfolding story, with its inherent edge-of-your-seat, heart-in-your-throat drama, adroitly juggling a parade of characters, clearly laying out the technical and engineering challenges, and judiciously parsing out expository information in the occasional sidebar.
—The Horn Book (starred review)

An in-depth account of a harrowing real-life mission that succeeds against all odds…Masterful storytelling fleshes out the complex human emotions behind key decisions, illuminates diplomatic and political negotiations, and underscores an unwavering faith—in maintaining hope and in harnessing powers of the mind. Thoughtfully researched, expertly crafted.
—Kirkus Reviews (starred review)

Soontornvat’s narrative nonfiction account shares these events and those that led to the rescue along with intricate details about caverns, sump diving, and other scientific details that emphasize the harrowing conditions of the rescue. She also touches on Thai culture, immigration issues, Buddhism, and religion…This stellar nonfiction work reads like a heart-pounding adventure story. Every library should have a copy.
—School Library Journal (starred review)

Soontornvat masterfully chronicles this amazing undertaking, in which incredible ad hoc feats of engineering became commonplace. Her narration and the testimonies of the numerous figures she interviewed are suspenseful and deeply felt. Interspersed with All Thirteen’s gripping account are fascinating, accessible analyses – supplemented by photos, diagrams, maps and more – of the cultural, technological, scientific and spiritual considerations that affected the rescue effort, from Buddhism to climate change to political protocol…All Thirteen is an inspiring testament to those 18 fateful days of communal empathy, determination and hope. In Soontornvat’s talented hands, it’s at once a nail-biter and a revelation: “This rescue was impossible, and they did it anyway.”
—BookPage (starred review)

All Thirteen: The Incredible Cave Rescue of the Thai Boys' Soccer Team