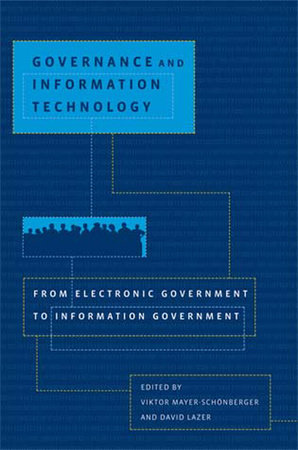 From Electronic Government to Information Government

About Governance and Information Technology

Experts discuss moving beyond the notion of electronic government and its focus on technology and efficiency to a broader concept of “information government” that incorporates the role of information flows within government, between government and citizens, and among citizens themselves.

Developments in information and communication technology and networked computing over the past two decades have given rise to the notion of electronic government, most commonly used to refer to the delivery of public services over the Internet. This volume argues for a shift from the narrow focus of “electronic government” on technology and transactions to the broader perspective of information government—the information flows within the public sector, between the public sector and citizens, and among citizens—as a way to understand the changing nature of governing and governance in an information society. The chapters discuss the interplay between recent technological developments and evolving information flows, and the implications of different information flows for efficiency, political mobilization, and democratic accountability. The chapters are accompanied by short case studies from around the world, which cover such topics as electronic government efforts in Singapore and Switzerland, the U.S Environmental Protection Agency’s effort to solicit input on planned regulations over the Internet, and online activism “cyberprotesting” globalization.