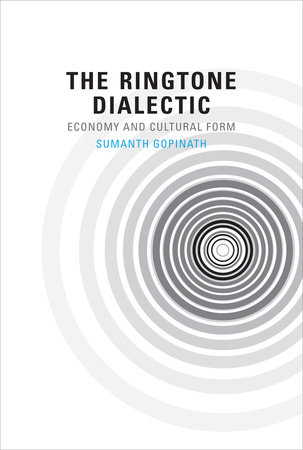 About The Ringtone Dialectic

The rise and fall of the ringtone industry and its effect on mobile entertainment, music, television, film, and politics.

A decade ago, the customizable ringtone was ubiquitous. Almost any crowd of cell phone owners could produce a carillon of tinkly, beeping, synthy, musicalized ringer signals. Ringtones quickly became a multi-billion-dollar global industry and almost as quickly faded away. In The Ringtone Dialectic, Sumanth Gopinath charts the rise and fall of the ringtone economy and assesses its effect on cultural production.

Gopinath describes the technical and economic structure of the ringtone industry, considering the transformation of ringtones from monophonic, single-line synthesizer files to polyphonic MIDI files to digital sound files and the concomitant change in the nature of capital and rent accumulation within the industry. He discusses sociocultural practices that seemed to wane as a result of these shifts, including ringtone labor, certain forms of musical notation and representation, and the creation of musical and artistic works quoting ringtones. Gopinath examines “declines,” “reversals,” and “revivals” of cultural forms associated with the ringtone and its changes, including the Crazy Frog fad, the use of ringtones in political movements (as in the Philippine “Gloriagate” scandal), the ringtone’s narrative function in film and television (including its striking use in the films of the Chinese director Jia Zhangke), and the ringtone’s relation to pop music (including possible race and class aspects of ringtone consumption). Finally, Gopinath considers the attempt to rebrand ringtones as “mobile music” and the emergence of cloud computing.

With a certain dry humour mixed with the arch tones of mild scholarly disdain, reading Gopinath on ‘the degraded pre-adolescent utopias’ of the Crazy Frog tune can be a little like reading Glenn Gould blithely discussing the ‘harmonic primitivism’ of the Beatles. Nonetheless, this unique and often fascinating volume unearths a sufficient number of intriguing artistic responses to suggest that there may have been more to the ringtone as cultural form than Für Elise rendered in coarse FM synthesis and dididing ding bing bing.—Art Review—

…the most interesting parts of the book were those where Gopinath discusses the cultural aspects related to ringtones. Ringtones, Gopinath maintains, are aestheticized signals. Their function is to indicate, by means of sound, that the owner of the mobile phone is receiving a phone call. A simple beep would suffice to accomplish this task. Nevertheless, many phone user prefer to use another sound to indicate this, one that is aesthetically more pleasing. A Bach excerpt, for example.