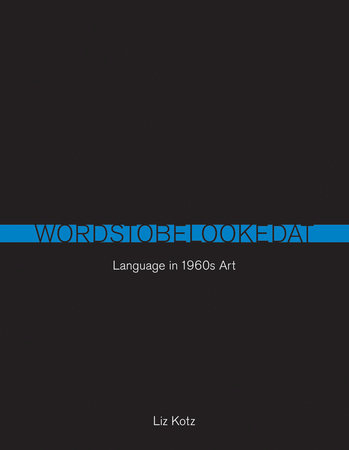 Words to Be Looked At

About Words to Be Looked At

A critical study of the use of language and the proliferation of text in 1960s art and experimental music, with close examinations of works by Vito Acconci, Carl Andre, John Cage, Douglas Huebler, Andy Warhol, Lawrence Weiner, La Monte Young, and others.

Language has been a primary element in visual art since the 1960s—in the form of printed texts, painted signs, words on the wall, recorded speech, and more. In Words to Be Looked At, Liz Kotz traces this practice to its beginnings, examining works of visual art, poetry, and experimental music created in and around New York City from 1958 to 1968. In many of these works, language has been reduced to an object nearly emptied of meaning. Robert Smithson described a 1967 exhibition at the Dwan Gallery as consisting of “Language to be Looked at and/or Things to be Read.” Kotz considers the paradox of artists living in a time of social upheaval who use words but chose not to make statements with them. Kotz traces the proliferation of text in 1960s art to the use of words in musical notation and short performance scores. She makes two works the “bookends” of her study: the “text score” for John Cage’s legendary 1952 work 4’33”—written instructions directing a performer to remain silent during three arbitrarily determined time brackets—and Andy Warhol’s notorious a: a novel—twenty-four hours of endless talk, taped and transcribed—published by Grove Press in 1968. Examining works by artists and poets including Vito Acconci, Carl Andre, George Brecht, Douglas Huebler, Joseph Kosuth, Jackson Mac Low, and Lawrence Weiner, Kotz argues that the turn to language in 1960s art was a reaction to the development of new recording and transmission media: words took on a new materiality and urgency in the face of magnetic sound, videotape, and other emerging electronic technologies. Words to Be Looked At is generously illustrated, with images of many important and influential but little-known works.

An excellently researched archaeology of the emergence of Conceptualism in New York in the ’60s and a reminder of the extraordinary fecundity of the dialogues that were occurring in avant-garde circles at that time.—The Art Book—

Kotz, a professor of cultural studies and comparative literature, has a keen eye and ear for language in art. And she has also gamely tackled close readings of some of the twentieth century’s most impenetrable, enigmatic artworks and poems, drawing out a succession of fascinating details and compelling contextualizations.

Looking for More Great Reads?
21 Books You’ve Been Meaning to Read
Download Hi Res
Words to Be Looked At

Words to Be Looked At