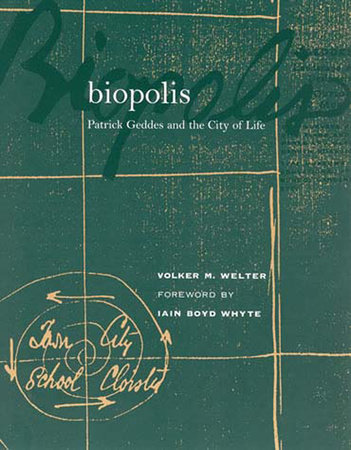 Patrick Geddes and the City of Life

An examination of the work and influence of Scottish urban planner and theorist Patrick Geddes.

The Scottish urbanist and biologist Patrick Geddes (1854-1932) is perhaps best known for introducing the concept of “region” to architecture and planning. At the turn of the twentieth century, he was one of the strongest advocates of town planning and an active participant in debates about the future of the city. He was arguably the first planner to recognize the importance of historic city centers, and his renewal work in Edinburgh’s Old Town is visible and impressive to this day.

Geddes’s famous analytical triad—place, work, and folk, corresponding to the geographical, historical, and spiritual aspects of the city—provides the basic structure of this examination of his urban theory. Volker Welter examines Geddes’s ideas in the light of nineteenth-century biology—in which Geddes received his academic training—showing Geddes’s use of biological concepts to be far more sophisticated than popular images of the city as an organic entity. His urbanism was informed by his lifelong interest in the theory of evolution and in ecology, cutting-edge areas in the late nineteenth century. Balancing Geddes’s biological thought is his interest in the historical Greek concept of polis, usually translated as city-state but implying a view of the city as a cultural and spiritual phenomenon.

Although Geddes’s work was far-ranging, the city provided the unifying focus of nearly all of his theoretical and practical work. Throughout the book, Welter relates Geddes’s theory of the city to contemporary European debates about architecture and urbanism.

A landmark study that analyzes the complex ideas that lie behind Geddes’s work with fresh clarity and insight.—Choice—

Welter does a first-class job of ‘reading’ Geddes and interpreting the complex ideas in his work.