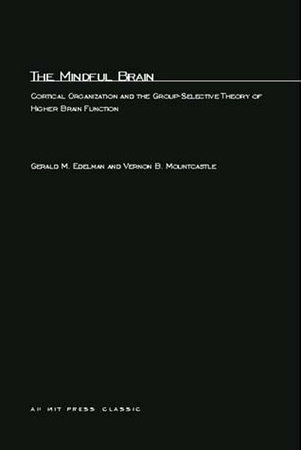 Cortical Organization and the Group-Selective Theory of Higher Brain Function

By Gerald M. Edelman and Vernon B. Mountcastle

By Gerald M. Edelman and Vernon B. Mountcastle

About The Mindful Brain

A proposal by two eminent biological scientists for a mechanism whereby mind becomes manifest from the operations of brain tissue.

This significant contribution to neuroscience consists of two papers, the first by Mountcastle an, the second by Edelman. Between them, they examine from different but complementary directions the relationships that connect the higher brain—memory, learning, perception, thinking—with what goes on at the most basic levels of neural activity, with particular stress on the role of local neuronal circuits.Edelman’s major hypothesis is that “the conscious state results from phasic reentrant signaling occurring in parallel processes that involve associations between stored patterns and current sensory or internal input.” This selective process occurs by the polling of degenerate primary repertoires of neuronal groups that are formed during embryogenesis and development. Edelman’s theory extrapolates to the brain the selectionistic immunological theories for which he was awarded the 1972 Nobel Prize in Physiology or Medicine. Mountcastle’s paper reviews what is known about the actual structure of various parts of the neo cortex. He relates the large entities of the neocortex to their component modules—the local neuronal circuits—and shows how the complex interrelationships of such a distributed system can yield dynamic distributed functioning. There are strong conceptual parallels between Mountcastle’s idea of cortical columns and their functional subunits and Edelman’s concept of populations of neurons functioning as processors in a brain system based on selectional rather than instructional principles. These parallels are traced and put into perspective in Francis Schmitt’s Introduction.