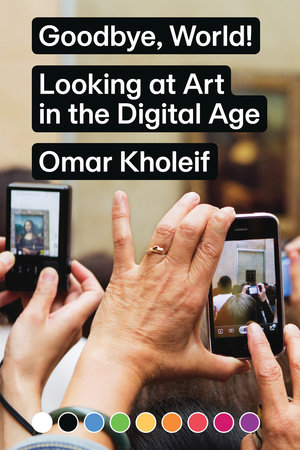 Looking at Art in the Digital Age

A look at how the internet and post-millenial technologies have transformed our ways of seeing and birthed a new form of culture.

The way we see the world has changed drastically since NASA released the “blue marble” image of the earth taken by Apollo 17 in 1972. No longer a placid slow-moving orb, the world is now perceived as a hothouse of activity and hyper-connectivity that cannot keep up with its inhabitants. The internet has collectively bound human society, replacing the world as the network of all networks. In Goodbye, World! Looking at Art in the Digital Age, writer and curator Omar Kholeif traces the birth of a culture propagated but also consumed by this digitized network. Has the internet transformed the way we see and relate to images? How has the field of perception been altered by evolving technologies, pervasive distribution, and our interaction with screens? How have artists working in diverse contexts, from eBay auctions to augmented reality, created new ways of emoting that are determined by these technologies? Focusing on a cultural and artistic landscape that has taken shape since the year 2000, Kholeif aims to put into context a new language for seeing, feeling, and being that has emerged through post-millennial technologies, and argues for a nuanced understanding of the post-digital condition. Taking cues from John Berger’s Ways of Seeing and Alvin Toffler’s Future Shock, this book—part memoir, part critical analysis—should prove essential for anyone interested in the changing world of the internet.