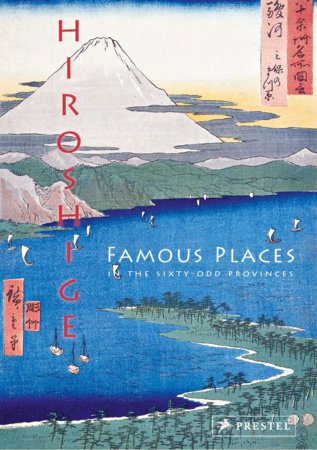 Famous Places in the Sixty-odd Provinces

This elegant volume showcases Hiroshige’s exquisite scenes of 19th-century Japan in a format that honors the Japanese bookmaking tradition.

The last great master of the ukiyo-e tradition, Hiroshige produced works of subtle yet intense color. This collection of prints, first published in the 1850s, contains images of each of Japan’s provinces. Created during Hiroshige’s highly productive later years, this series was an ambitious project that captured a crucial moment in the Japan’s history, a decade before the Meiji Restoration would open the doors to industrialization and Western influence. One of its most striking characteristics is the vertical presentation, which allowed Hiroshige to experiment with perspective. His sweeping panoramas of the beautiful countryside combine the illusion of distance with a depth of detail that draws the viewer in. In addition to these glorious landscapes, Hiroshige’s depictions of busy urban centers provide a rare insight into daily life in the Edo era. This beautiful slip-cased edition includes two volumes: a complete set of seventy prints and a separate booklet that provides an introduction to Hiroshige’s life and art as well as descriptive captions of the prints. From thundering waterfalls and towering cliffs to wide beaches and bustling harbors, Hiroshige’s native land emerges in serene and exquisite detail–the perfect keepsake for fans of ukiyo-e, Japanese culture, and printmaking.