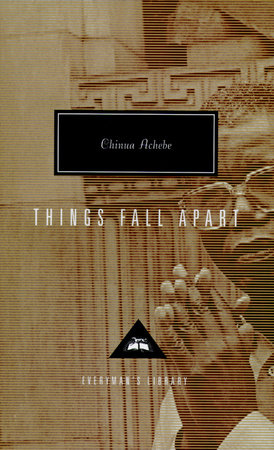 1. The Ibo religious structure consists of chi — the personal god — and many other gods and goddesses. What advantages and disadvantages does such a religion provide when compared with your own?

5. The villagers believe — or pretend to believe — that the "Supreme Court" of the nine egwugwu are ancestral spirits. In fact, they are men of the village in disguise. What does this say about the nature of justice in general, and in this village in particular?

8. In an essay entitled "The Novelist as Teacher," Achebe states: "Here then is an adequate revolution for me to espouse — to help my society regain belief in itself and put away the complexes of the years of denigration and self-abasement" (Hopes and Impediments, p. 44). In what ways do you feel that this novel places Achebe closer to the fulfillment of this noble aspiration?

9. Nature plays an integral role in the mythic and real life of the Ibo villagers, much more so than in our own society. Discuss ways in which their perception of animals — such as the cat, the locust, the python — differ from your own, and how these different beliefs shape our behavior.

Learn More About Things Fall Apart
print
Back to Top