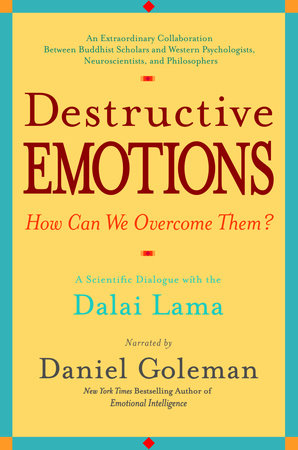 Acts of rage, cruelty, and violence mar the landscape of humanity around the world. What drives these destructive impulses? Is such behavior a product of environment, neurochemistry, or other forces altogether? And, perhaps more importantly, what can be done to tame destructive emotions and nurture peaceful ones in their place? Bringing an unprecedented level of depth, insight, and discovery to the topic, Destructive Emotions reports on a recent collaboration between the Dalai Lama and an extraordinary panel of Buddhist scholars, Western psychologists, neuroscientists, and philosophers to grapple with these crucial questions.

For five days in 2000, this distinguished group gathered in the Dalai Lama’s private meeting room in India for fascinating discussions about the very nature of rage and related emotions such as fear and anxiety. Bestselling author and behavioral-science pioneer Daniel Goleman carefully recorded the revelations and lively debates taking place that week, offering all readers access to the compelling findings shared by these remarkable leaders in their disciplines. Destructive Emotions presents antidotes drawn from Buddhist tenets and confirmed by the astonishing technology that allows scientists to peer inside the brain centers where emotional storms are calmed. It’s a book sure to spark discussion among educators, religious and political leaders, parents—and all who seek peace for themselves and the world.

The questions, discussion topics, and author biography that follow are intended to enhance your reading of Destructive Emotions. We hope they will enrich your experience of this illuminating work.

The Mind and Life Institute sponsors cross-cultural dialogues that bring together the Dalai Lama and other Buddhist scholars with Western scientists and philosophers. This book was based on Mind and Life VIII.

For more information on DESTRUCTIVE EMOTIONS—and to read an excerpt—visit our website at www.bantamdell.com. While there, drop by our Reading Group Guide Feature to learn about other titles perfect for book clubs.

1. How might your own group discussion of Destructive Emotions mirror the one described in the book? What areas of expertise and life experience do your group members bring to the topic?

2. In his foreword to the book, the Dalai Lama writes, “When there is no place for justice and honesty in people’s hearts, the weak are the first to suffer. And the resentments resulting from such inequity ultimately affect everyone adversely.” In concrete terms, how does this translate into action on an individual level?

3. “The Lama in the Lab” raises the debate of medication versus meditation in the quest to eliminate destructive emotions. Compare and contrast these two approaches, particularly in terms of the cutting-edge research performed in Madison.

4. Discuss the various styles of Tibetan meditation engaged in by Lama “Öser” and the fact that distinctions between these styles were clearly reflected in his MRI. Do you consider mechanized studies of the brain to be at odds with or complementary to Buddhist tenets? Does quantifying brain images miss the point of meditation, or enhance the experience of it?

5. What did you discover about the Dalai Lama’s life story, especially his education and exile? How do these experiences appear to have shaped his perspective on destructive emotions, on both personal levels (his admission to an initial fear of flying) and far-reaching political ones?

6. Discuss the three poisons (craving, anger, and delusion) that Buddhist philosophy tells us are the root of all unhappiness and conflict. What do the world’s most prevalent religions teach about such “poisons?” What do the images in Western media and culture convey about them?

7. Semantics proved to be a particularly interesting facet of these multi-lingual dialogues. How do you personally define the following concepts: compassion, ethics, mood, and mindfulness?

8. Do you believe that the mind drives the brain, or vice versa? What is your opinion in the debate over whether emotions serve an evolutionary purpose?

9. What do you make of the story in Chapter Twelve, in the section entitled “Counteracting Cruelty,” in which the Buddha asserts that some people are untrainable because he can only lead them as far as their previous karma would allow? Is the concept of karma refuted by evidence of neural plasticity and the protean brain?

10. How are we to distinguish between exaggerated, destructive self-esteem and the beneficial variety? What is the most important “audience” for our actions in Western society, as compared to, for example, Asian reverence for parents and elders? Why does the Dalai Lama apparently resist such discussions of cultural distinctions?

12. Describe your own destructive emotions. How do they manifest themselves? What did the book indicate about their possible origins? What antidotes might you try in order to soothe these emotions? How can your experience be extrapolated to the destructive incidents in your community and in the world at large?

13. Would other forms of spirituality lend themselves to the sorts of dialogues sponsored by the Mind Life Institute? How might the discussion have changed had a Hindu, Muslim, or Christian leader sat in place of the Dalai Lama during the dialogues on destructive emotions? What benefits does the book describe in having a philosopher present to “fill the gap.”

14. Review the recommendations asserted in Destructive Emotions, including Paths, modeling compassion, embracing the tranquilizing effects of empathy and generosity, meditating (especially with regard to a possible tipping point at fourteen hours), and easing the suffering of every living creature, even an insect or a fish. Having read the points of view from a variety of preeminent thinkers on the topic of destructive emotions, what is your personal response to the question posed in the book’s subtitle, “How Can We Overcome Them?”

DANIEL GOLEMAN, PH.D., is the author of the worldwide bestsellers Emotional Intelligence and Working with Emotional Intelligence, and is the co-author of Primal Leadership. Nominated twice for the Pulitzer Prize for his journalistic work covering the brain and behavioral sciences published in The New York Times, he is currently a member of the board of the Mind & Life Institute and a Fellow of the American Association for the Advancement of Science.

Train Your Mind, Change Your Brain

The Gift of Adversity

The Politics of Experience
Back to Top