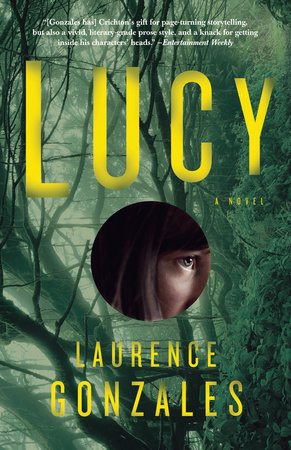 In this provocative, stunningly original novel, Laurence Gonzales combines a fast-paced thriller starring a most unusual teenage heroine with a provocative look at the moral, ethical, and legal consequences of cutting-edge biotechnology. Like Mary Shelley’s classic Frankenstein and Michael Crichton’s Next, Lucy raises challenging questions about the boundaries of scientific exploration and the definition of what it means to be human.

Fourteen-year-old Lucy Stone has spent her entire life at a small camp in the Congo, where her father, Donald, studied bonobos, great apes who are the closest living relatives of humans. When marauding soldiers destroy her home during a bloody civil war, Lucy is rescued by Jenny Lowe, an anthropologist working at a nearby research site. Jenny takes Lucy home with her to Chicago and sets out to find Lucy’s family. Jenny’s search leads only to dead ends—until she reads Donald’s notebooks and discovers that Lucy is the child of a genetically modified bonobo Donald inseminated with his own sperm. As a scientist, Jenny is shocked by Donald’s reckless experiment. As a woman, she is enchanted by Lucy’s beauty, charm, and intelligence. Fearful of what will happen if the secret of Lucy’s parentage is revealed, Jenny decides to adopt her.

From her unsettling reactions to the abundance at the local supermarket and the bustle at the mall to her social blunders at school, Lucy’s odd behavior arouses both curiosity and suspicion, but with the help of Jenny and her best friend, Amanda, Lucy makes a place for herself in the alien environment. When she comes down with a strange disease, however, her secret is out and no one can protect her from government scientists eager to examine her and religious fanatics and right-wing politicians determined to destroy her.

1. Lucy opens in the war-torn jungles of Congo (pp. 7-13). In what ways do the setting and the chaotic events lay the groundwork for the novel’s themes? What aspects of Lucy’s demeanor reflect an ordinary, expected reaction to the tragedy that has occurred and which ones strike you as unusual? Does Jenny’s training as an anthropologist color her initial responses to Lucy?

2. How do the descriptions of Lucy’s first days in Chicago capture the difficulties of adjusting to a new environment (pp. 20-23)? What details help to create the sense of displacement and alienation Lucy feels? What insights do her dreams and memories offer into the emotions she is experiencing?

3. Discuss Lucy’s reactions to the shopping mall (p. 29) and the grocery store (p. 34). What message do they convey about American culture? To what extent does Lucy express basic impulses most of us have been taught to suppress?

4. Gonzales cites several actual attempts to create a human-ape hybrid (pp. 46-47). What impact does learning about these efforts, as well as Dr. Stone’s detailed reports on his methods, have on your readiness to accept Lucy’s existence?

5. Do you agree with Jenny that “No one would do that today, because of all the ethical issues involved. Besides, no one would have a scientific reason to do it. (p. 47)? How has the exposure of highly questionable experiments performed in the recent past influenced the ethical standards in science? What reasons might a scientist give for pursuing an “experiment” like Lucy today?

6. Discuss Dr. Stone’s motivation for creating Lucy. Does his desire to protect the bonobo from extinction distort his ability to recognize the implications of his project? Does his assertion that “humankind . . . is rapidly destroying itself. Something must change in human nature” and that “Lucy, in short, is the best argument in my defense” (p. 50) reflect scientific hubris, idealistic naïveté, or a credible, if extreme, reaction to real threats facing the world today?

7. What does Lucy’s explanation and acceptance of her father’s mission (p. 53) reveal about the disparity between his ambitions as a scientist and his role as a parent? Why did he fail to see the ramifications of his plans?

8. “Jenny understood that her own inability to see what Lucy was, despite the clues, would work in their favor . . . . When people encountered Lucy, so bright, so pretty, and in some ways such a normal teenager, the truth would be the furthest thing from their minds” (p. 62). What do Jenny’s assumptions demonstrate about how people are judged? Do the reactions of Harry (p. 39) and Jenny’s mother (pp. 85-86) confirm or contradict her assumptions?

9. Lucy’s ability to tune into “The Stream”—the nonverbal communication of animals in the natural world—is one of her most intriguing qualities. What particular passages best illustrate the advantages and disadvantages of her connection to nature? Lucy discovers that her classmates are “at home in The Stream, while the adults seem to have lost it” (p. 67). Does this perception ring true to you? Does it offer a fresh point of view on familiar social conduct and interactions?

10. Jenny “could tell that Dr. Mayer was a mischief maker of the worst sort” (p. 73). Given Lucy’s outburst of violence, are the school psychologist’s concerns and questions inappropriate?

11. In the aftermath of their meeting, “the accumulation of clues had Jenny wondering if people were having the same unconscious moment of recognition that she had when she first encountered Lucy . . . . Everything from her smell to her strength to her exotic and charming looks poured out the message that she was not of the same species” (p. 84). Is Jenny’s theory that people retain an animal-like instinct for recognizing their own species convincing?

12. When she sees videos of teenage girls on YouTube, Lucy is struck by the similarities between their behavior and the behavior of bonobos in the jungle (pp. 100-101). If you have read books or seen television programs offering evidence that elements of human nature and behavior can be traced to our biological heritage, discuss how Gonzales weaves the findings (or theories) of primatologists and other scientists into the narrative.

13. Once the truth about Lucy is made public, the challenge of protecting her takes on new urgency. Discuss how the news of her existence brings out both the best and the worst in human nature. How would you characterize the reactions of Dr. Syropolous (p. 133), Amanda (pp. 139-143), and Harry (p. 144)? What does the behavior of others—from the television interviewer (p. 157) to the airport security guard (pp. 158-159) to the Randalls (pp. 163-164), to Charlie Revere (p. 179)—demonstrate about people’s willingness to accept all that Lucy represents?

14. In light of the forces aligned against her, is Lucy’s abduction and incarceration inevitable? What resources does Lucy draw upon to survive the humiliations and cruelty she is subject to? What role does her education and intelligence play? In what ways do her natural instincts, powers of intuition, and sheer physical strength help her plan and execute her escape?

15. The memorandum from the Alamogordo Primate Facility to the U.S. Navy Medical Corps (pp. 181-183); the article by an evolutionary biologist at Stanford (pp. 185-186); Lucy’s testimony in Congress and the response by Senator Rhodes (pp. 187-191) present wide-ranging and contradictory opinions about how Lucy should be treated. Which arguments are the most compelling and why?

16. In many ways, the controversy surrounding Lucy encapsulates the disputes and enmities that trouble our society today. How does it relate to such matters as the debates about biological and genetic research; the conflict between evolutionists and “creationists”; the treatment of outsiders or people deemed “different” in some way; and the impetus behind the animal rights and environmentalist movements. What observations in the novel can be read as critical commentary on recent American political and military policies?

17. In an interview, Gonzales said “(A)t its heart, Lucy is a coming-of-age story about a wonderful young girl discovering herself and the world in which she finds herself” (http://search.barnesandnoble.com/Lucy/Laurence-Gonzales/e/9780307593665/?itm=1#ITV). How does Gonzales brings to life the mixture of insecurity, confusion, defiance, and the search for self-definition of adolescence? Do Lucy’s recollections of her childhood, her losses, and the things she gains provide insights into the changes and transformations that are part of a universal experience (pp. 205-207)?

18. Stories about the creation of hybrid or artificial humans and life forms are part of our literary and cinematic history. How does Lucy fit into this tradition? Why do you think Gonzales presents Lucy as a nearly perfect combination of human and bonobo traits?

19. What does Lucy suggest about the distinctions we make between species? What light does it cast on the limitations of using biology (DNA structure) to define the borders between humans and other animals?

20. Scientists have made remarkable advances in genetic research (for instance, uncovering the genes responsible for some illnesses), and have achieved success in cross-breeding various animals. Do the potential benefits of research into human genetics outweigh the opposition expressed by many different groups? What historic scientific discoveries flouted accepted wisdom, religious teachings, or ethical standards, yet are now universally accepted? (For example, up until the late nineteenth century, surgeons washing their hands). Are there moral or ethical limits to what scientists should pursue? Did reading Lucy change your attitude about current trends in science?

Laurence Gonzales is the author of three novels and five books of nonfiction. His bestselling book, Deep Survival, has been published in six languages.

Background reading (nonfiction)
Jon Cohen, Almost Chimpanzee: Searching for What Makes Us Human in Rainforests, Labs, Sanctuaries and Zoos; Frans de Waal, Our Inner Ape: A Leading Primatologist Explains Why We Are Who We Are; Jared Diamond, The Third Chimpanzee: The Evolution and Future of the Human Animal; Vanessa Woods, Bonobo Handshake; Robert Yerkes, Almost Human
Learn More About Lucy
print

The Diagnosis
Back to Top