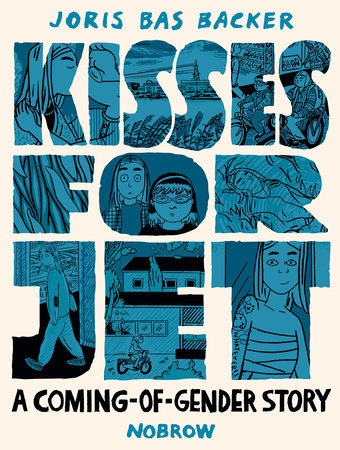 About Kisses For Jet

A striking and emotive graphic novel from debut trans creator, Joris Bas Backer about coming to terms with his gender before the age of the internet. For fans of Gender Queer and The Black Famingo.

“A nuanced look into the life of a trans teen by a trans author and illustrator. The black, white, and grayish-blue illustrations powerfully capture Jet’s complicated emotions.”
– BuzzFeed

“I love that this graphic novel exists for generations who may be feeling these same insecurities, anxieties, and challenges that Jet experiences.”
—Utopian State of Mind

“A warm, funny, lived-in book that captures exactly the feeling of having a desire you just can’t place, and the relief when you manage to crack it wide open.”
— Mattie Lubchansky, The Nib

“Exciting from the first to the last page! I say, this book is already a classic.”
— Ulli Lust, author of Today is the Last Day of the Rest of Your Life

“Kisses for Jet is a sensitively written, beautifully-illustrated depiction of a trans-masculine experience so rarely shown in media…a huge step forward for trans representation.”
—  Jake Hall, Author of The Art of Drag

In 1999, when most people think that the world is about to end with the Y2K crash on the eve of the new Millennium, Jet is just trying to get through high school. When their Mom moves to another country to work on fixing the Millennium bug, Jet is forced to stay at a boarding house while they finish the school year, and they’re not pleased about it.

But something’s not quite right, and it’s not just the out-of-control kids that Jet has to live with, or the staff who look after the boarding house who act super suspiciously. As Jet slowly starts to feel overwhelmed by their peers, they begin to notice that they don’t feel like the other girls in their class. As new feelings start to emerge, Jet slowly begins to realise that they may be more of a boy than a girl.

Is that even possible? And who do they talk to about these feelings when there’s not even any internet around, and cell phones are barely used?

This coming-of-gender graphic novel debut from trans creator Joris Bas Backer is an enlightening and often hilarious tale that casts light on what it was like to be transgender before information and help was more accessible and widespread.

“A nuanced look into the life of a trans teen by a trans author and illustrator. The black, white, and grayish-blue illustrations powerfully capture Jet’s complicated emotions.”
– BuzzFeed

“Kisses for Jet is a sensitively written, beautifully-illustrated depiction of a trans-masculine experience so rarely shown in media…a huge step forward for trans representation.”
– Jake Hall, Author of The Art of Drag

“Trans creator Joris Bas Backer conveys his coming-of-gender memoir with intimacy and humor while showing us what it was like during a time where information was not just a click away.”
– Bookshop Santa Cruz

“A collection of small moments of gender discovery, almost as if by mistake…anyone that has spent hours reflecting on their own personal journey and joining threads, this book is for you.”
–The Tiny Activist