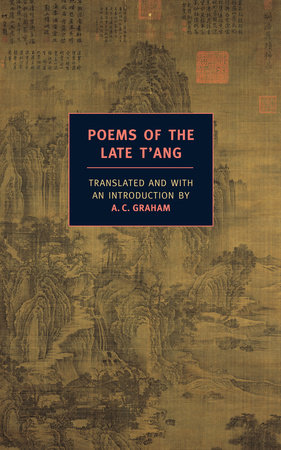 Poems of the Late T'ang

About Poems of the Late T’ang

Classical Chinese poetry reached its pinnacle during the T’ang Dynasty (618-907 A.D.), and the poets of the late T’ang-a period of growing political turmoil and violence-are especially notable for combining strking formal inovation with raw emotional intensity. A. C. Graham’s slim but indispensable anthology of late T’ang poetry begins with Tu Fu, commonly recognized as the greatest Chinese poet of all, whose final poems and sequences lament the pains of exile in images of crystalline strangeness. It continues with the work of six other masters, including the “cold poet” Meng Chiao, who wrote of retreat from civilization to the remoteness of the high mountains; the troubled and haunting Li Ho, who, as Graham writes, cultivated a “wholly personal imagery of ghosts, blood, dying animals, weeping statues, whirlwinds, the will-o’-the-wisp”; and the shimmeringly strange poems of illicit love and Taoist initiation of the enigmatic Li Shang-yin. Offering the largest selection of these poets’ work available in English in a translation that is a classic in its own right, Poems of the Late T’ang also includes Graham’s searching essay “The Translation of Chinese Poetry” as well as helpful notes on each of the poets and on many of the individual poems.

“You never forget the moment you first encounter a book that turns out to be a treasure for life. Especially works that open up new worlds. I still remember buying Penguin’s wonderful Late Tang Poetry at school…” –Michael Wood, The Independent [UK]

“Angus Graham…was the West’s chief authority on ancient Chinese philosophy and grammar. He was the sinologue’s sinologue in the sense that he understood the classical texts better than anyone else, but he was also a sensitive interpreter of poetry and philosophy for a general audience…His translations of poetry seem to have been written for pure pleasure, but include some of the most difficult as well as the most beautiful Chinese poems.” –The Guardian [UK]

“Angus Graham was widely recognized as the world’s premier authority on classical philosophy and linguistics, as well as a gifted translator of philosophy and poetry and a prominent exponent of the ancient Chinese view of life to the Western world.” –The Times [UK]

A "pioneering introduction.” –The Irish Times

Poems of the Late T'ang