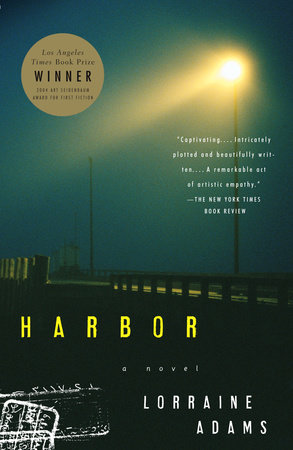 The introduction, discussion questions, suggestions for further reading, and author biography that follow are designed to enhance your reading group’s discussion of Lorraine Adams’s provocative first novel, Harbor, a rich and moving portrait of Muslim Arab immigrant life in America that challenges some of our deepest and most conflicted emotions in the aftermath of the September 11 terrorist attacks.

The story centers on Algerian stowaway Aziz Arkoun, from his near-death arrival in frigid Boston harbor to his acclimation to life first in gritty East Boston and then in Brooklyn. Throughout the chronicle of Aziz’s confused and lonely years in America, Adams weaves an eerie account of his terror-filled past as a young soldier in the corrupt Algerian army in which he became a double agent and engaged in gruesome acts to survive. Horrific events forced Aziz to leave his beloved family in Algeria, and his experience in the army continues to haunt him in his new life in America. Once safely in East Boston, Aziz is taken in by his crooked childhood friend, Rafik, a fellow Algerian illegal alien. As they house other friends and stowaways escaping the brutal civil strife in Algeria, as well as Aziz’s educated brother, who is able to immigrate legally, their bond becomes stronger. However as he suspected all along, Aziz finds out that Rafik and a friend are involved in theft and drugs, among other criminal activities. When Aziz realizes that the U.S. government is onto them, his fate and the fate of his fellow Algerians takes unexpected twists and turns as Harbor reaches its astonishing conclusion.

1. The title Harbor connotes many different meanings in this novel. Is there one in particular which stands out as the reason Adams selected it?

2. For his first months in America, Aziz understands not a word of English, and, as time progresses, he begins to piece together awkward phrases. For example, several months after arriving in Boston, Aziz observes a woman in the bar and thinks: “She made him remember giraffes” [p. 52]. Adams uses this awkward phrasing instead of the more typical, “She reminded him of giraffes.” What techniques does Adams employ to effectively convey Aziz’s language barrier? How does the author convey his complete ignorance of American culture and customs? How else is Aziz disconnected from his new surroundings?

3. Aziz observes “this way that Americans had, of being soft but hard; nothing difficult, nothing easy; nothing good, nothing bad” [p. 45]; Rafik later describes this attitude to Aziz as “matter-of-fact” [p. 52]. What does this observation about American cultural behavior imply about the Arabs? How does this simple observation exemplify the seemingly impassable cultural chasm between the Muslim Arabs and the Americans?

4. Aziz thinks of his mother before he confronts Rafik in the nightclub: “But wait. His mother’s hand rested on his shoulder. We are to be kind” [p. 63]. Also, Heather is a mystery to Aziz: “The riddle of Heather’s father preoccupied Aziz, but after trying to solve why a man of such seeming stature would speak ill of his wife in front of strangers, and allow his daughter to live in a dwelling so ragged, on a street so dismal, with a man so underhanded, he realized there was so much of his new existence that was unknown to him, outside his English, or kept from him deliberately, or not yet anything he had ever experienced, so that recognizing it would have been like remembering a man he had never met” [p. 65]. From these thoughts of Aziz and from descriptions of his family life back in Algeria, what can we conclude about Aziz’s sense of morality and values? How does Aziz’s upbringing affect his success or failure in the United States?

5. Why did Aziz leave Algeria? Is the reason he gives to others the same one he admits to himself?

6. Aziz constantly mistrusts his own instincts, and yet his instincts seem extremely acute. He reminds himself to “be awake to the Rafik situation. . . . Rafik would never change” [p. 23]. Why does he not trust his own instincts? Is it because of his upbringing? His army experience? Does Aziz make poor decisions or choices because of this self-doubt? While it is purely speculation, how might Aziz’s life have turned out differently if he had not stayed with Rafik?

7. How does Aziz’s life change after Ghazi’s arrival? Why is Ghazi so interested in finding out what Rafik is hiding in the storage room?

8. Who is Dhakir, and what role does he have in Ghazi’s fate? What happens to Ghazi, and why does he turn to Kamal and Rafik [see p. 255]? How is Ghazi’s character different from Aziz’s character? Aziz realizes he did what was necessary to survive in Algeria because “the bright dust of being alive could not be shook out of him” [p. 247]. Is this desire to survive what motivates Ghazi, or is it something else?

9. What kind of a person is Heather, and what makes her attractive to the Algerian men?

10. How does the character of Hank Bridges and his early appearance in the book affect the reader’s perceptions of the American government agents?

11. How might a reader initially respond to the way Rafik, Heather, and Aziz use Linda and her husband’s insurance to hospitalize Aziz [p. 49]? Might the reader’s feelings about their behavior change later in the novel when they repay Linda, especially given the circumstances under which they repay her [p. 273]? What do these actions demonstrate about the lengths the Algerian and other Arab Muslim members of the community will go to help each other [see, for example, pp. 71—75]? When Aziz discovers Rafik’s criminal involvement, Aziz tells Ghazi, “He [Rafik] saved us. . . . I will not be the one who sends him” [p. 96]. Is the loyalty the Algerians show each other unique to Muslim Arabs, or is it a characteristic of many immigrant communities? What other actions by the Algerian friends might also be initially misinterpreted by the reader?

12. What values seem to be universal Islamic values that Aziz shares with Ghazi, Rafik, and his other friends in the United States? What values are unique to Aziz?

14. The epigraph at the beginning of the novel is from a poem by Farid ud-Din Attar, the author of the book that the old Yemeni from Brooklyn gives Aziz as a parting gift [p. 229]. Farid ud-Din Attar lived in Persia (now Iran) from approximately 1119—1220 A.D. where he was an herbalist and spiritualist. His masterpiece, the Manteq at-Tay–translated as The Conference of the Birds–describes a group of human souls in the bodies of birds who search for their spiritual master. Why did Adams select this epigraph for Harbor? What do the passages sited in the novel mean to Aziz [pp. 229—230]?

16. In an interview published online at Powells.com, Adams states: “My goal is not to defend terrorists, but to attempt to give voice to the interior lives of young Muslim Arabs who may or may not become terrorists. It is something of an exploration, yes, of that set of common essences people tend to call ‘their humanity’ when talking about marginalized and despised populations. Some excommunicate terrorists from the human. But terrorists, as the cliché has it, are made not born. They are with us and among us. I believe in the value of trying to understand that which threatens us. Understanding is not a substitute for action. It is, however, part of any enlightened rational mind.” Does Adams accomplish this goal in Harbor? Does Adams’s portrait of Muslim Arabs break down or uphold any of the stereotypes of Muslim Arabs in the United States?

17. What is your reaction to Aziz’s punishment? What about the punishments of the other Algerians in his circle [p. 292]? How is the investigation portrayed, and how are the investigators portrayed? Did the counter-terrorist agents have other options? Did the American agents treat the Arab suspects the same way they would have treated non-Arab Americans?

18. In the aftermath of 9/11, how would a reader, having inevitably formed images and opinions of the terrorists that perpetrated the attacks, find these images and opinions challenged by Harbor? What questions does Adams force the reader to ask? Does Harbor provide any answers to these questions?

Lorraine Adams was educated at Princeton University and was a graduate fellow at Columbia University, where she received a master’s degree in literature. She won a Pulitzer Prize in 1992 for investigative reporting for The Dallas Morning News. She was a staff writer for The Washington Post for eleven years covering, among other things, the FBI. In 1999, Adams reported on the arrest of an Algerian in Canada, Abdel Ghani Meskini, and his involvement in a terrorist plot to detonate a car full of explosives at Los Angeles International Airport. Adams has also authored book reviews, among them, “Terrorism and the English Language” published in The Washington Monthly, September 2002. She lives in Manhattan and is at work on her second novel. Harbor was the recipient of the Los Angeles Times Book Prize.

The Book of Jonas

Links
Back to Top