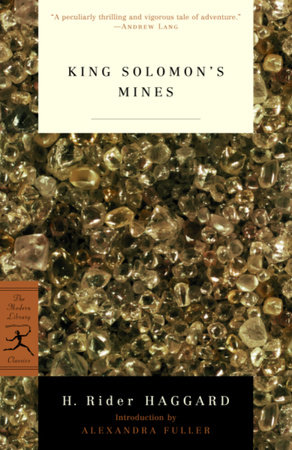 1. H. Rider Haggard is said to have written King Solomon’s Mines on a bet, and in a scant six weeks. Does the novel show signs of the author’s haste? Does it seem to have been written more for commercial success than out of any sense of artistic expression?

2. The novel was indeed an astonishing blockbuster in its day, and has remained in print for well over a hundred years. Does its success then, or its endurance to this day, surprise you?

3. Haggard spent some years living in Africa, and he fills King Solomon’s Mines with details he absorbed. Do his depictions of the African landscape and its people feel authentic to you? Do you find it surprising that his detailed portrayal of a tribal battle is actually very close to the truth?

4. Consider the author’s portrayals of, particularly, Umbopa, Twala, Gagool, and Foulata, and of blacks in general. Does Haggard attempt to make his black characters seem real (or at least as real as his white characters), or does he succumb, do you think, to racial stereotyping? Consider that Haggard describes the virtuous Umbopa as very attractive (and relatively light-skinned), while Twala, the villain, is ugly (and dark-skinned). How does Haggard’s portrayal of blacks affect your appreciation of the novel?

5. Haggard dedicates the novel to “big and little boys.” Is there anything in the novel to hold the interest of big or little girls? Does the absence of a romantic plot (with one notable exception) surprise you? Or does it seem in keeping with the tastes of the novel’s intended audience? Consider the fact that the most famous film versions of King Solomon’s Mines introduce significant female characters who are not in the novel, and that these movies are as much about romance as about adventure. What does this tell you about Haggard’s audience – and Hollywood’s?

6. Do you think that readers in Haggard’s day found the interracial romance of Good and Foulata, however lightly touched upon it may be, shocking? Are you surprised that Haggard presents it so matter-of-factly? Would he have dared, do you think, to present a romance between a black man and a white woman?

7. King Solomon’s Mines is largely a realistic novel. Does the sequence in the Place of Death seem to veer into the realm of fantasy? Does it break the tone of the rest of the book?

8. Allan Quatermain proved so popular with readers that, even having killed him off in a sequel, Haggard felt compelled to revisit this character in numerous further novels and short stories. Can you understand the enduring fascination of this elephant hunter? Consider the popular characters of recent pop culture who have appeared in numerous sequels: Batman, Harry Potter, and particularly Indiana Jones, who might be seen to owe a creative debt to Quatermain. Why do you think such characters inspire ongoing interest?

9. Alexandra Fuller, in her Introduction to this Modern Library Paperback Classic, finds much in King Solomon’s Mines that is relevant to her experience of Africa in recent years and today. Consider what, if anything, twenty-first-century readers may learn from Haggard’s novel about current issues of imperialism, colonialism, race relations, even the environment.

From the Earth to the Moon

Journey to the Center of the Earth

Around the World in Eighty Days

Robinson Crusoe
Back to Top