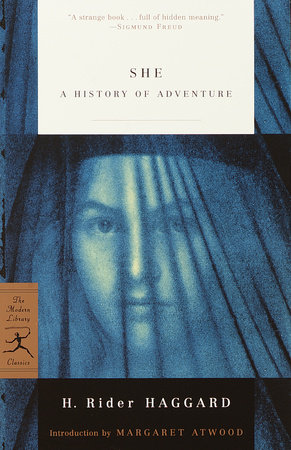 1. Consider the great effort that the author makes to pass off the events of the novel as real (presenting himself merely as the editor of the manuscript rather than its author, the detailed presentation of the shard, the extensive footnotes, etc.). Does this actually make the novel seem true to life? Do you think that the author?s contemporaries were taken in, or did they readily recognize the game the author was playing?

2. Discuss the novel?s presentation of women, blacks, Muslims, and Jews. Do you think that Job?s and Holly?s misogyny is actually the author?s? Do you find the discussions of nonwhites and non-Christians objectionable? How do you imagine Haggard?s readers reacted?

3. It?s been suggested that many of the book?s themes?particularly its fascination with the implacable, all-powerful, aggressive female at its center?were not entirely understood by the author, that he was writing from his unconscious feelings and fears. Do you agree?

4. Haggard was one of the bestselling authors of his day. Do you think that the quality of his writing justifies his huge success?

5. Consider the author?s allusions to things and ideas that would be familiar to his readers: the Thames Embankment, St. Paul?s Cathedral, Mary, Queen of Scots. Do you find such imagery helpful, or are these now obscure references a block between the twenty-first-century reader and his or her enjoyment of the novel?

6. Haggard spent some years living in Africa. Do his depictions of the African landscape and its people feel authentic to you?

7. She is often considered the progenitor of the modern fantasy/quest novel. How do you think it compares in quality, style, or content to the Ring trilogy by Tolkien, the Narnia books of C. S. Lewis, or, for that matter, to the Indiana Jones movies and J. K. Rowling?s Harry Potter books? Do you think that its influence can be felt in works you?re familiar with?

8. Fictional characters in possession of immortality are often presented as miserable, monstrous, or decadent, and the two-thousand-year-old Ayesha is depicted as coldhearted, morbid, almost inhuman. Wouldn?t extended life be a benefit? Or would a longer-than-normal life span invariably lead to a distance from normal feelings?

Learn More About She
print

The Red Badge of Courage and Other Stories

The Pathfinder
Back to Top