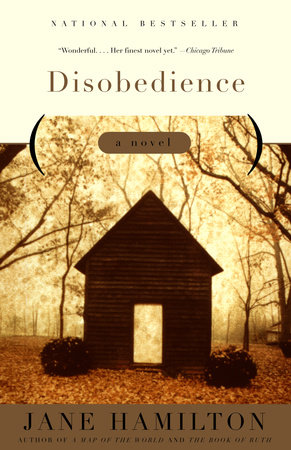 The introduction, discussion questions, author biography, and suggestions for further reading that follow are designed to enhance your group’s reading of Jane Hamilton’s Disobedience, a novel that offers a fresh look at the age-old problems of love and betrayal, the hard lessons of history, and the fragility and strength of family life.

When seventeen-year-old Henry Shaw inadvertently logs onto his mother’s e-mail account, he discovers a secret that turns his previously stable sense of his family–and of himself–inside out. Mrs. Shaw is having an affair with Richard Polloco, a Ukrainian violin maker whose poetic messages and romantic lifestyle seem to offer an intensity lacking in her even-keeled husband. With mounting resentment, Henry tracks his mother’s affair through her e-mail, and observes her with new eyes as she struggles with her daughter’s obsessive interest in Civil War reenactments and her husband’s maddening hands-off approach to parenting. Henry’s perception of his mother is further complicated by his own first romance and his growing need to understand his parents while at the same time distancing himself from them. As the novel moves toward a violent confrontation that will change each of the Shaws, Hamilton explores the problems of obedience–to family, to one’s passions, to history, to who we are at the deepest levels of identity–and reveals the hidden tensions that roil just beneath the surface of family life.

Part coming-of-age story, part meditation on the conflicting demands of romantic intensity and familial security, Disobedience creates an indelible portrait of one family teetering at the brink of disintegration, yet clinging to the mysterious bonds that hold them together.

1. Why has Hamilton chosen Disobedience as her title? Which characters refuse to "obey"? In what ways is the novel as a whole about power relationships within the family and the pull of the heart against the roles each family member is expected to play?

2. For centuries, novelists have used letters to help tell their stories. Is Hamilton’s use of e-mail simply another instance of a long-standing tradition, or is there a distinctly new element that e-mail communication brings to Disobedience?

3. In the first e-mail that Henry discovers, his mother informs Jane about her affair and writes, "This is an old story. There is nothing new in it" [p. 3]. Later, Henry wonders if there is "anything more interesting than the story of a man and a woman coming together out of nowhere" [p. 38]. And, indeed, the story of love and betrayal is both familiar and endlessly fascinating. In what ways is the novel both telling a story and commenting on the importance of stories in our lives? What does the book suggest about how stories shape and give meaning to human experience?

4. In one of their many arguments about Elvira’s involvement in Civil War reenactments, Mrs. Shaw claims that her daughter is in the grip of a dangerous and embarrassing obsession, whereas Mr. Shaw believes that it is a passion "that will hold her in good stead for the rest of her education" [p. 25]. Which interpretation of Elvira’s behavior seems more accurate? How does Elvira’s preoccupation with the Civil War parallel her mother’s involvement with Richard Polloco?

5. Why is Liza so drawn to Richard Polloco? How is he different from her husband? What aspects of his life and his past are especially appealing to her? Is Henry right in thinking she is attracted to a life with Polloco in part because it would be a life without her family?

6. Virtually all of the characters in Disobedience are affected, in one way or another, by history: Kevin Shaw teaches history, Henry is troubled by a possible past life, Elvira is immersed in the Civil War, Mrs. Shaw performs early music, and Richard Polloco and his family have experienced firsthand the horrors of European history. At one point, Henry describes the Civil War as "nothing more than a marriage spat . . . the midlife crisis followed by forgiveness. . . ." [p. 126]. What is Hamilton suggesting about the relationship between past and present, and between national and personal history, throughout the novel? What role does their shared family history play in Mrs. Shaw’s decision about whether or not to leave her husband?

7. In the novel’s climactic scene at Shiloh, Mrs. Shaw rushes to Elvira’s defense, brandishing a knife and threatening to murder the men who would harm her daughter. How does this scene bring all of the major tensions of the novel to crisis and resolution? How does it change each member of the family, especially Mrs. Shaw and Elvira?

8. Henry views what happens to his sister at Bloody Pond as nothing more than a prank, while his friend Karen calls it rape [p. 240]. Each person witnesses the same event but reaches a different conclusion about it. Which seems more accurate? Why do they interpret this event so differently? What might Hamilton be saying about the power of storytelling?

9. To what extent is Disobedience a coming-of-age novel? What does Henry learn about himself, about family, about love? How does his character evolve from the beginning to the end of the novel? Has he achieved a healthy separation from his parents?

10. In what ways does Henry’s awakening sexual desire for Lily parallel his mother’s passion for Richard Polloco? How does it color his view of his mother’s affair?

11. Mr. Shaw offers Henry some advice about love: "Just make sure the dream girl doesn’t think you’re going to solve her problems. There’s a lot of pressure on us, to save the day, to be something more than we are. I’m afraid the idea of courtly love is still alive and well after eight centuries" [p. 193]. In what ways does this statement illuminate the Shaws’ marriage? Does Mrs. Shaw expect her husband to be more than he is? Or is Kevin merely justifying his own shortcomings?

12. Shirana, the psychic, tells Mrs. Shaw that in a past life she was married to her son, and when Henry discovers this, he is naturally disconcerted. To what extent does Henry’s preoccupation with his mother’s affair represent an Oedipal attachment to her? How does he break this attachment?

13. Does Liza make the right choice in ending her relationship with Richard Polloco? Why does she decide to stay with her husband? How is the love he offers her–what Henry describes as "lackluster love" [p. 269]–different from what Polloco provides? Where does the novel seem to come down on the dilemma between passionate romance and stable affection?

Jane Hamilton lives, works, and writes in an orchard farmhouse in Rochester, Wisconsin. Her first novel, The Book of Ruth, won the PEN/Hemingway Award and was a selection of Oprah’s Book Club®. Her second novel, A Map of the World, was also selected by Oprah’s Book Club® and became an international bestseller. The Short History of a Prince, was a Publishers Weekly Best Book of 1998 and also won the Chicago Tribune‘s Heartland Prize.
Learn More About Disobedience
print

You Shall Know Our Velocity
Back to Top