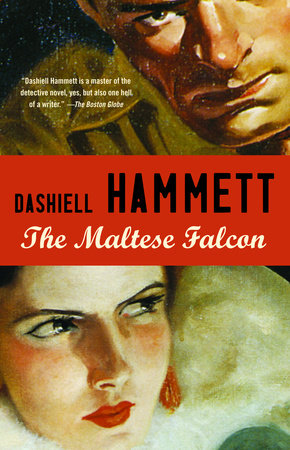 The questions, discussion topics, and author biography that follow are designed to enhance your reading of this outstanding selection from the “hard-boiled” school of crime writing: The Maltese Falcon by Dashiell Hammett. We hope that it will provide you with new ways of looking at–and talking about–the nature of detective fiction, as well as give you insight into how the hard-boiled style of writing emerged in the genre; how the style was shaped by twentieth-century American culture and by the lives of the men who created it; and how this form of writing has subsequently affected the way we view ourselves as Americans.

Published in 1930, The Maltese Falcon was Dashiell Hammett’s third novel in two years. Here he creates a new detective, Sam Spade. When the intriguing Miss Wonderly appears in his office and asks him to tail a fellow named Floyd Thursby, Spade puts his partner,
Miles Archer, on the case. In short order, Thursby and Archer turn up dead, and the beautiful woman is back in his office, this time telling him her real name, Brigid O’Shaughnessy, and imploring him, in a dramatic plea, to help her. Spade replies, "You won’t need much of anybody’s help. You’re good. You’re very good. It’s chiefly your eyes, I think, and that throb you get into your voice when you say things like ‘Be generous, Mr. Spade’" [p. 35]. Spade relents, though not before extracting a hefty retainer–almost all her money. Then a "small-boned man" named Joel Cairo calls on Spade. He has his own special interest in Thursby, and to Thursby’s relationship to a missing statuette of a black bird. Cairo makes the mistake of pulling a gun on Spade, who easily knocks him out. The encounter leads the detective, all the while clumsily trailed by the young gunsel Wilmer, to the third main character, Casper Gutman. The fat man reveals the value of the Maltese falcon, and the treasure hunt is on.

This greedy and ruthless trio of characters bent on finding the statuette meet their match in Sam Spade. The plot, characters, and dialogue in The Maltese Falcon are perfectly controlled by Hammett, incorporating a vigor and style that became the paradigm for hard-boiled crime fiction.

1. Sam Spade’s attitude toward authority is patently clear in remarks like “It’s a long while since I burst out crying because policemen didn’t like me” [p. 19] or “At one time or another I’ve had to tell everyone from the Supreme Court down to go to hell, and I’ve got away with it” [p. 170]. How is Spade’s distrust of power manifested in his actions? How important is distrust as an aspect of his character?

2. Of the three women in the book–Brigid O’Shaughnessy, Effie Perine, and Iva Archer–are any fully realized, or are perhaps all three, as stereotypes, three sides of one woman? As a stereotype, what does each woman represent? What does Spade mean, and what does it say about Spade, when he tells Effie, “You’re a damned good man, sister” [p. 160]?

3. A blatant stereotype is Joel Cairo: “This guy is queer” [p. 42], Effie informs Spade when the perfumed Cairo comes to the office. Is a homosexual character effective or necessary in the plot? Would he be as effective without sterotyping? Why do you think Hammett created him?

4. Near the end of the story, Spade says to Brigid, “Don’t be too sure I’m as crooked as I’m supposed to be” [p. 215]. What evidence is there that he’s not crooked? Does honor temper greed in his negotiations with the others in the hunt for the black bird? How are greed and ruthlessness packaged here so that ultimately we might not care whether the characters are crooked or not? Does style compensate for all in the hard-boiled genre?

5. “By Gad, sir, you’re a character” [p. 178], says Gutman, laughing, when Spade suggests making Wilmer the fall-guy. Is the Spade-Gutman relationship one of justice versus corrupt wealth or one of equals competing for the same prize? How does Gutman’s sophistication and erudition reveal another side of Spade?

6. When Spade returns to the office in the last scene, Effie does not greet him with her usual verve. What has happened to the breezily affectionate bond between them? What is Effie’s relationship to Brigid? Will Effie forgive Spade, or do we not know enough about her to make predictions?

Samuel Dashiell Hammett was born in St. Mary’s County, Maryland, on May 27, 1894, and grew up in Philadelphia and Baltimore. He left school at the age of fourteen and held a variety of jobs, from messenger boy to stevedore, and finally worked as an operative for the famous Pinkerton’s Detective Agency, a job that sent him west. In 1918, World War I interrupted his sleuthing, although he was discharged from the army in less than a year with tuberculosis. Spending time in several veterans’ hospitals, in one he met a nurse,
Jose Dolan, and married her in 1921. Settling in San Francisco, he resumed detective work, and began to write. In 1922 he sold his first story, to H. L. Mencken’s Smart Set, and quickly thereafter began to sell many to its spinoff that featured mystery and crime fiction, Black Mask. In the next decade, Hammett became the unquestioned master of detective-story fiction in America. His first four novels–Red Harvest (1929), The Dain Curse (1929), The Maltese Falcon (1930), and The Glass Key (1931)–exerted a powerful influence on American culture and writing. His last novel, The Thin Man (1934), introduced the sophisticated husband-and-wife sleuthing team of Nick and Nora Charles.

In World War II, Hammett again served in the U.S. Army, as a sergeant in the Aleutians for most of his more than two-year stint. In 1951, he was blacklisted for his left-wing political affiliations and jailed for six months. Tax delinquency charges by the Bureau of Internal Revenue followed. He never wrote again. Dashiell Hammett died on January 10, 1961. The Continental Op was published posthumously in 1974 by arrangement with his estate’s executor and longtime friend and companion, Lillian Hellman.

The Lady in the Lake
Raymond Chandler

A Rage in Harlem
Chester Himes

Trouble Is My Business
Raymond Chandler

An Elderly Lady Is Up to No Good
Helene Tursten

In a Lonely Place
Dorothy B. Hughes

In the Cut
Susanna Moore

The Jealousy Man and Other Stories
Jo Nesbo

Death in Venice and Other Stories
Thomas Mann

When the Thrill Is Gone
Walter Mosley