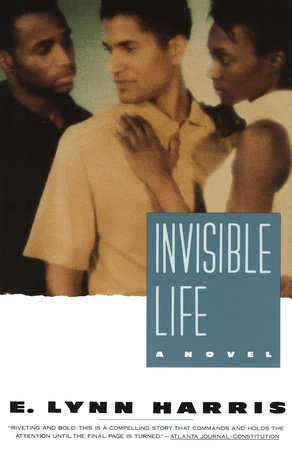 In three linked novels–Invisible Life, Just As I Am, and Abide With Me–E. Lynn Harris opens the door to a world rarely depicted in popular literature, the gay and bisexual black community. Written with sensitivity and sass, the novels have all appeared on the Blackboard bestseller list and have won enthusiastic acclaim from critics and a broad range of readers. The questions, discussion topics, and suggested reading list that follow are designed to enhance your reading group’s discussion of the books and the insights they offer into the lives of men and women, gay and straight, as they face such universal problems as finding and keeping love, making the right career choices, and dealing with sometimes difficult parents, co-workers, and friends.

At the center of the Invisible Life trilogy is Raymond Tyler, a man struggling to do the right thing without betraying his past or sacrificing his dreams. The son of a successful lawyer in Birmingham, Alabama, Raymond always assumed he would follow in his father’s footsteps. His life takes an unexpected turn, however, when he finds himself attracted to a handsome fraternity brother at college. Their carefully cloaked relationship–at once confusing, exhilarating, and frightening–marks the first step in Raymond’s journey toward self-discovery and self-acceptance. It is a journey that takes him from the tradition-bound South to the uninhibited world of gay Manhattan, to a thriving Seattle, where his legal career and his love-life seem destined for lasting success. Along the way, Raymond encounters a rich and diverse array of people, including the flamboyant, openly gay Kyle; the beautiful, loving Nicole, an aspiring actress; and Basil, a dashing and dangerous football player. Their stories join with Raymond’s in a fast-paced chronicle that proves that love, friendship, and sexual desire frequently defy conventional expectations and explanations.

Harris’s novels not only recount the changes and choices the individual characters confront, they evoke in telling detail the society in which those choices are made. From the importance of church and family to the consequences of biases based on skin color, sexual orientation, and gender, Harris uncovers the ties that bind and the issues that divide the African American community today.

Handsome, athletic, and smart, Raymond Tyler is about to graduate from college and is anticipating a comfortable future as a lawyer and family man when, despite his deep love for his longtime girlfriend, he is swept into an affair with Kelvin, a fraternity brother. Confused and troubled by sexual longings he has always been taught were wrong, he leaves Alabama for law school in New York City and takes a job in a top firm there upon graduation. Raymond finds a home of sorts in New York’s gay community–until his feelings for Nicole, a young actress who has no inkling of his "invisible life" with a married male lover, adds a new complication to his struggle to come to terms with his sexuality.

1. Raymond is initially upset by his sexual encounter with Kelvin, but soon settles into a routine of seeing both Sela and Kelvin [p. 30]. Would he have behaved the same way if he were seeing two women simultaneously? Do you think Sela would have been aware of his unfaithfulness if his relationship was with another woman, rather than a man? How does the clandestine nature of Raymond’s relationship with Kelvin influence their feelings about one another?

2. Raymond says "There were times, however, I needed Sela, not just for public appearances, but because deep in my heart I truly cared for her" [p. 34]. Is he being completely honest with himself, or is he clinging to an image of himself as a heterosexual? Why is he unable to tell Kelvin that he loves him?

3. In what ways are Raymond’s reactions to the gay community in New York similar to his feelings about being a black man at a white high school and college? Do you think Raymond’s sense of himself as an "outsider" is inevitable for minorities in a predominantly white and straight society?

4. Why is Kyle, whose background is similar to Raymond’s, able to be perfectly open about being gay? What does Kyle’s choice of lovers who are "not his equal in looks, economic standing or intelligence" [p. 74] reveal about him?

5. How does Raymond’s visit to his parents help you understand his difficulties in coming to terms with his bisexuality? Why can’t he and his mother talk openly about it? Do the events of the weekend, as well as conversations Raymond and his father have throughout the book, justify Raymond’s feeling that his father would take his sexual orientation as "a personal slap in the face" [p. 88]?

6. What was your reaction to Raymond and Quinn’s conversation about their successful efforts to remain "undercover gay guys" [p. 132]? Is their behavior strictly a private matter? Does their willingness to tolerate anti-gay jokes and comments make them accomplices in perpetuating society’s prejudices? Do Quinn’s deception of his wife and Raymond’s decision to let Nicole assume he is straight [p. 143] reflect a lack of respect for women?

7. As a professional athlete and public figure, is it essential for Basil to keep his bisexuality a secret? Do athletes and other people in the public eye risk more than ordinary people when they come out? Discuss both the negative and positive repercussions of recent disclosures of homosexuality by famous people.

8. In thinking about Basil and other black men who lead secret lives, Raymond says "Had I stayed in Alabama, my life would have been similar. There was no way I would involve my family in my gay lifestyle. Besides, I came to realize that it was a lifestyle and not my life" [p. 168]. Is sexuality merely a "lifestyle" or does it define us in a fundamental way? To what extent are Raymond and the other characters in the novel defined by their sexual behavior and their attitudes about sex and love?

9. Do you think there is a special affinity between beautiful and smart black women and gay or bisexual black men? How would you answer the questions Raymond raises when he is contemplating Kelvin and Candance’s engagement and his own relationship with Nicole [p. 186]?

10. Do individual men, whether straight, gay, or bisexual, have an ethical or moral responsibility to be open about their sexuality with their partners, even when coming out may threaten their position in society and their futures? What role should women take in dealing with the AIDS epidemic?

11. The title Harris chose for his first book–and eventually for the entire trilogy–echoes Ralph Ellison’s Invisible Man, a seminal work in African-American literature. How does the world Ellison describes compare to Harris’s description of the African-American community today? Are the protagonists similar in any way? Does "Invisible Life" only refer to the lives of the gay and bisexual men, or does it encompass aspects of the women’s lives as well?

12. Discuss the views of homosexuality you have encountered in your own life. Are most people more willing to accept racial and religious differences than sexual differences? Do gay black men and women suffer greater doubts and more guilt than gay whites? Why or why not? What cultural factors influence the way people feel and talk about sexuality? Did the novels change your own feelings about the gay community?

13. The characters’ relationships with their parents is an important theme in the trilogy. What impact does her mother’s criticism have on the choices Nicole makes and her image of herself? Is Basil’s hostility toward women a result of being raised by his father? Do you think his father genuinely loved him? Why didn’t his father succeed in teaching Basil "to be a man and to try and do what’s right"? Is Peaches a believable character or is Harris’s portrait of her too idealistic? Are you more sympathetic to Yancey when you find out how her mother treated her as a child?

14. Discuss the differences between the views on race, religion, and gender expressed by the two generations. How do they reflect the society in which each generation grew up? Do you think Americans are becoming more tolerant or that age-old prejudices still thrive?

E. Lynn Harris is a former computer sales executive with IBM and a graduate of the University of Arkansas at Fayetteville. He self-published Invisible Life, with great success. It went on to become a Blackboard bestseller and a 1996 ABA Blackboard List Outstanding African American Novel Nominee. In 1996, Just As I Am was awarded the Novel of the Year Prize by Blackboard African-American Bestsellers, Inc. If This World Were Mine was a finalist for the 1997 NAACP Image Award and winner of the James Baldwin Award for Literary Excellence. His new novel, Not A Day Goes By, will be published by Doubleday in summer 2000. Harris currently divides his time between Chicago and New York.
Learn More About Invisible Life
print

And This Too Shall Pass

Up With the Sun

I Say a Little Prayer

If This World Were Mine

The Future Has a Past
Back to Top