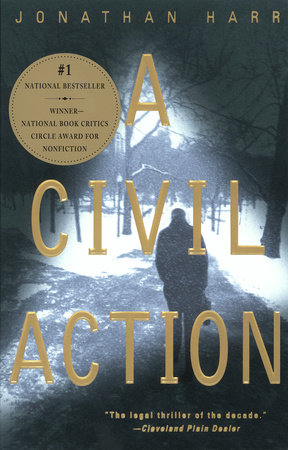 The questions, discussion topics, and author biography that follow are intended to enhance your group’s reading of Jonathan Harr’s A Civil Action. We hope they will enrich your understanding of this fascinating chronicle of an epic courtroom battle.

Two of the nation’s largest corporations stand accused of causing the deaths of children. In Woburn, Massachusetts, several young children have been stricken with leukemia and one of the mothers, suspecting that their drinking water was polluted with industrial waste, initiates a lawsuit against the offending companies. It will be an unequal contest: two mighty corporations, commanding the finest legal representation money can buy, levelled against a few working-class families. Representing the bereaved parents is an unlikely Don Quixote: Jan Schlichtmann, a snazzily dressed, Porsche-driving young lawyer who has struck it big on several million-dollar medical malpractice cases. The flamboyant Schlichtmann is totally unprepared for what this particular case will demand of him. In the nine years’ battle he comes close to losing everything– money, career, reputation, and even his sanity.

Allowed full access to the case and to the lives of Schlichtmann and his staff while they fought it, and given honest and extensive interviews by the lawyers of the opposing team, Jonathan Harr has been able to give the reader a riveting insider’s look at not only the legal issues and maneuvers involved in an important lawsuit, but at the human drama and tragedy that can get lost all too easily among the legal details– the grief and loss of the plaintiffs, the anxiety of the lawyers, and the bafflement of the jurors. A Civil Action reads like a fast-paced legal thriller and brilliantly captures the high drama of the courtroom.

1. When he hears about the lawsuit, Jack Riley is outraged. "I was born and brought up in this town," he says. "That goddamn land is my life, my blood, because that’s where I get my water" [p. 103]. How does this apparently sincere statement square with Riley’s actions? Does your sense of Riley’s character change after his final appearance in court [pp. 480-483]? Is Donna Robbins’s pity for him appropriate, or is it misplaced?

2. How do the attitudes and actions of Al Love, Tommy Barbas, Paul Shalline, and Joe Meola contrast with one another? How important is personal honor to each of them, in the face of possibly losing their jobs?

3. Can you understand Anne Anderson’s decision not to go to Toronto with her husband? Was it really in Jimmy’s best interest to stay in Woburn? Might it not be dangerous for her non-contaminated children to remain in the highly polluted Woburn area?

4. During the jury selection Facher says, "I think it’s very difficult for any woman with small children to decide the case on the evidence rather than emotion" [p. 282]. Do you agree with him? Do you think he is correct in saying that a father with young children might not find it so difficult? As Harr describes it, does the jury selection process, and the role of the various lawyers within it, seem to be a good system that ensures an impartial jury?

5. How important is money in winning a suit? As a general rule, will the party with the deepest pockets win? Do the results of the Woburn case support that theory? Is it possible to present a case well and fairly, even from a position of financial disadvantage?

6. When Beatrice tries to settle before the trial, Schlichtmann wonders whether he is "ethically obliged to inform the families of Jacobs’s offer" [p. 290]. Is he so obliged? Do the problems that might ensue from this disclosure justify Schlichtmann’s secrecy on this subject?

7. Do you find Schlichtmann’s dealings with the eight Woburn families to have been sufficiently fair and honest? Was the case taken out of the plaintiffs’ hands, and, if so, was such a method essential for an efficient prosecution? Anne Anderson believed that Schlichtmann was patronizing toward the Woburn families, kept them from having any control over their own case, and used them "simply as a vehicle for his own ambition, for his own fame and fortune" [p. 453]. Do you agree with any of her complaints?

8. Judge Skinner believes that the primary motivation in lawsuits over the death of children is "an overwhelming sense of personal guilt." It is not so much the money the families are after, he thinks, as "to have it said clearly that this wasn’t their fault" [p. 273]. Is this an accurate description of the Woburn parents’ motivations?

9. Is Judge Skinner biased toward the defense, as Schlichtmann believes him to be? Might there be any truth behind Schlichtmann’s suspicions of a conspiracy?

10. The questions that Judge Skinner sets for the jurors ask "for answers that were essentially unknowable…. The judge was, in effect, asking the jurors to create a fiction that would in the end stand for the truth" [p. 369]. Do these questions indeed demand too much from a jury of non-experts? Harr suggests that perhaps the case was one "that the judicial system was not equipped to handle" [p. 369]. Is this true? How else might it be handled and settled?

11. In a trial like the one described in A Civil Action, rhetoric plays an enormous part in a lawyer’s ultimate success or failure. Is this fair? What about rhetorical tactics that hinder the other side’s presentation of evidence, like Facher’s repeated objections? Do all of these courtroom tactics finally serve to reveal or to obscure the truth?

12. Is res judicata–the principle that a judgment must remain once it has been decided in court, even in the face of new and conflicting evidence– a reasonable or an unreasonable principle?

13. After their decision, the jurors each "had some misgivings, but on balance they felt they had done the best they could" [p. 392]. Is that good enough? If not, what might be done to improve the situation?

14. Donna Robbins believes that she and her fellow plaintiffs have succeeded in teaching corporate America a lesson; Reverend Young, on the other hand, thinks that the Grace executives and attorneys have reason to celebrate. With which of these opinions do you agree? Does the final settlement represent a victory, a loss, or a compromise?

15. Schlichtmann says that greed is "our motivating factor" [p. 417], and believes that he has devoted nine years to the Woburn case out of "pride, greed, ambition" [p. 491]. Is it in fact primarily greed that drives these lawyers? What other motivations drove Schlichtmann during the Woburn case? Do you find Schlichtmann to be self-indulgent or self-abnegating? Selfish or honorable?

16. What are your reactions toward Jan Schlichtmann as a lawyer? As a person? Do you find his emotional reactions to events reasonable, or too extreme? Was he traumatized by the trial, or does he thrive on anxiety and chaos?

17. In the Harvard Law Review, Nesson purports that, as summarized by Harr, "the judgments of the courts are meant to reinforce social rules and values and, at the same time, to deter behavior contrary to those rules and values" [p. 236]. Do the courts in fact achieve this end? Has reading A Civil Action changed your ideas about the American judiciary system, and, if so, in what way?

Jonathan Harr lives and works in Northampton, Massachusetts, where he has taught nonfiction writing at Smith College. He is a former staff writer at New England Monthly and has written for The New Yorker and The New York Times Magazine. Harr spent nine years researching and writing A Civil Action, which was published in 1995, subsequently nominated for a National Book Award, and awarded the National Book Critics Circle Award.
Learn More About A Civil Action
print

For the Sins of My Father
Back to Top