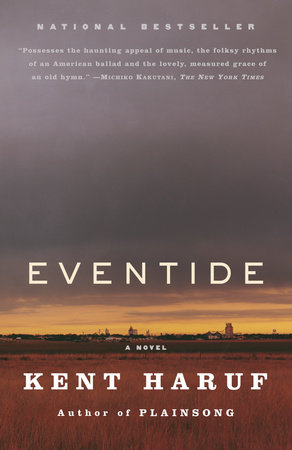 The National Bestseller from the Author of PLAINSONG

“Possesses the haunting appeal of music, the folksy rhythms of an American ballad and the lovely, measured grace of an old hymn.” —The New York Times Book Review

The introduction, discussion questions, and suggestions for further reading that follow are designed to enliven your group’s discussion of Eventide, Kent Haruf’s moving follow-up to his acclaimed novel Plainsong. Set in the cattle country of the high plains, in and just outside of Holt, Colorado, Eventide tells the story of the McPheron brothers, Harold and Raymond, two elderly bachelor-ranchers, and the rich cast of characters who surround them.

In many ways, Eventide is about the pain of separation. As the novel opens, Victoria Roubideaux is preparing to move away from the McPherons’ ranch to attend college in Fort Collins. Harold and Raymond had taken her in back when she was three months pregnant and turned out of her home. Victoria and her daughter, Katie, now more than a year old, have come to occupy a central place in the McPherons’ lives. Running parallel to this narrative are several other stories of loss and separation. Betty and Luther Wallace, poor and ill equipped to raise their children, face losing them to foster care. Mary Wells is raising her two young girls alone, while her husband works in Alaska. DJ Kephart has lost his mother and has never known his father. And all of these characters face even greater losses to come. How they respond—with sadness, outrage, bitter anguish, or hard-won stoicism—reveals the full depth and range of human emotion. But Eventide tells of connection as well as separation, of community as well as loneliness, of compassion as well as cruelty. Of all the characters, Raymond McPheron may suffer the most devastating loss, but his spirit of self-effacing generosity survives, and he meets someone who offers him a happiness he has never before experienced.

In writing that is as moving as any in contemporary fiction today, Kent Haruf offers an unforgettable portrait not only of the small town of Holt, Colorado, and the fascinating people who live there but of the human condition itself, in all its brilliance and frailty.

1. Two elderly bachelors living on an isolated ranch in eastern Colorado—not what one would immediately consider an exciting premise for a work of fiction. How does Kent Haruf transform the mundane materials of his characters and setting into such an emotionally compelling story?

2. If you have read Plainsong, in what ways does Eventide deepen readers’ relationships with those characters who also inhabit Haruf’s previous novel? How are the two novels alike? In what ways are they significantly different?

3. What kind of men are Harold and Raymond McPheron? What are their most distinctive and appealing characteristics? What makes them so likable?

4. Why does Haruf interweave, in alternating chapters, the stories of the McPheron brothers and Victoria Roubideaux, Luther and Betty Wallace and Rose Tyler, Hoyt Raines, DJ Kephart and his grandfather, and Mary Wells and her daughters? How are their lives interconnected? In what ways do they represent a wide spectrum of American society?

5. When Tom Guthrie and his sons finish separating the cows and their calves, Ike Guthrie says, “They make an awful lot of noise. . . . They don’t seem to like it much.” To which Tom replies, “They never do like it. . . . I can’t imagine anything or anybody that would like it. But
every living thing in this world gets weaned eventually” [p. 155]. How does this statement illuminate the central themes of Eventide? In what ways is the novel about the pain of separation, of getting “weaned”?

6. Haruf’s writing, like the speech of the characters he writes about, is restrained, as when Raymond calls Victoria to tell her of Harold’s death:

7. When Del Gutierrez tells Raymond that he can’t see how just one man can run the ranch—“It seems like too much for one person to do”—Raymond responds, “What else you going to do?” [p. 233]. How does this response typify Raymond’s attitude about life and his own predicament?

8. When Raymond worries that they might have to wait until seven-thirty to have dinner, Rose says, “You wouldn’t do very well in New York or Paris, would you,” and Raymond replies: “I wouldn’t even do very good in Fort Morgan” [p. 255]. Why wouldn’t Raymond do well in a big city? In what ways is he suited to, and a product of, the rural life of the high plains?

9. Why has Haruf included a character like Hoyt Raines in the novel? What does he add to the emotional texture of the book?

11. Near the end of the novel, Luther and Betty Wallace’s children are placed in a foster home. Why does the court make this decision? Is it the right one? Does Haruf intend for readers to regard Luther and Betty critically, sympathetically, or with some mixture of feelings?

12. Why is the budding romance between Rose and Raymond so appealing? Why must Raymond be tricked into meeting her? Why are they so drawn to each other?

13. Eventide ends with Raymond and Rose sitting together quietly, “the old man with his arm around this kind woman, waiting for what would come” [p. 300]. Why is this a satisfying way to end the novel? What is likely to come for them? Literary works often imply, if only implicitly, a set of values to live by. What attitudes and values does Eventide seem to hold up for emulation?

Kent Haruf is the author of Plainsong, Where You Once Belonged, and The Tie That Binds. He lives with his wife, Cathy, in Colorado.

And the Dark Sacred Night
Back to Top