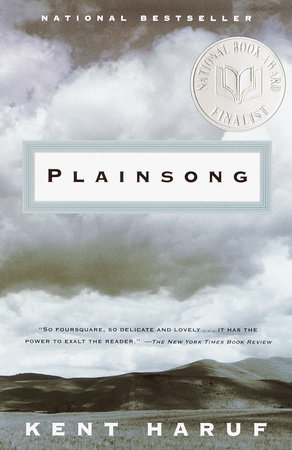 "A novel so foursquare, so delicate and lovely, that it has power to exalt the reader." —Verlyn Klinkenborg, The New York Times

The questions, discussion topics, and suggested reading list that follow are intended to enhance your group’s reading of Kent Haruf’s Plainsong. We hope they will provide you with new angles from which to approach and discuss this powerful tale of seven lonely lives set on the stark but beautiful High Plains of Colorado.

In the small town of Holt, Tom Guthrie, a high school teacher, fights to keep his life together and to raise his two boys after their depressed mother first retreats into her bedroom, and then moves away to her sister’s house. The boys, not yet adolescents, struggle to make sense of adult behavior and their mother’s apparent abandonment. A pregnant teenage girl, kicked out by her mother and rejected by the father of her child, searches for a secure place in the world. And far out in the country, two elderly bachelor brothers work the family farm as they have their entire lives, all but isolated from life beyond their own community.

From these separate strands emerges a vision of life—and of the community and landscape that bind them together—that is both luminous and enduring. Plainsong is a story of the abandonment, grief, and stoicism that bring these people together, and it is a story of the kindness, hope, and dignity that redeem their lives. Utterly true to the rhythms and patterns of life, Plainsong is an American classic: a novel to care about, believe in, and learn from.

1. Why might Kent Haruf have chosen Plainsong as the title for this novel? What meaning, or meanings, does the title have in relation to Haruf’s story and characters?

2. How does the small town of Holt figure as a character in each novel? How are the characters in each of the novels completely believable and different? How does Haruf repeat some character traits in his novels and to what effect? How do the characters and the image of the town change from book to book?

3. Few hints are given in the novel about what life might have been like for the Guthrie family before Ella left. What do you imagine that life to have been like? What sort of a marriage did Tom and Ella have, and what made it go wrong? What might account for Ella’s nearly total withdrawal even from the children she seems to love?

4. How do the three teenagers having sex in the abandoned house inform and affect Ike and Bobby? What does this sight tell them about sex? About love? About the relationships and power struggle between men and women?

5. Do you believe there are marked differences between Raymond and Harold McPheron? If so, what are they?

6. Why do you think the McPheron brothers have chosen to spend their lives together rather than start families of their own? Are they lonely or unhappy before Victoria’s arrival, or do they feel sufficient in themselves? What does Maggie mean when she tells them, "This is your chance" [p. 110]?

7. What parallels can you draw between the McPheron brothers and the young Guthrie boys? Why is the relationship so close in each case? What sort of a future do you see for the Guthrie boys? Do you think they will marry and have families?

8. The McPheron brothers think they know nothing about young girls. Is that the case? Has their solitary life close to the earth handicapped them so far as human relations go, or has it, in fact, provided them with hidden advantages?

9. What examples of parents abandoning children–either by desertion, emotional withdrawal, or death–can be found in this novel? What do these incidents have in common? How does abandonment affect children, and how does it shape their lives and relationships?

10. It is usually women who are portrayed as nurturers, but in this novel, men–Tom Guthrie and the McPheron brothers–provide shelter and comfort. How do men differ from women in this respect? What do these men offer that a woman might not be able to?

11. "These are crazy times," Maggie Jones says. "I sometimes believe these must be the craziest times ever" [p. 124]. What does she mean by this? In what way are our times "crazier" than earlier eras? How does such "craziness" affect the lives of young people such as Victoria, Ike, and Bobby?

12. What motives and feelings might have driven Tom to sleep with Judy when it was really Maggie he was interested in? Why might Maggie have seemed momentarily frightening or intimidating to him?

13. Why do the Guthrie boys befriend Iva Stearns? What are they looking for in this tentative friendship? Do they find what they are seeking?

14. Why do the Guthrie boys go to the McPheron brothers after Iva’s death rather than to someone closer to home, like their father or Maggie? Is there any indication that they connect Iva’s death with their mother’s abandonment? Why do they place their mother’s bracelet on the train tracks, then bury it?

15. The inhabitants of Holt and its surroundings are extremely laconic: they speak only sparingly, as though they mistrust words. What might cause this? In what way does it affect the characters’ relationships with one another?

16. How would you describe Holt, Colorado? What are its limitations, its disadvantages, and what are its strengths? In what ways is it typical of any American small town, and in what ways is it different? What help does it provide for people who need healing, like the characters in this book?

1. How does Kent Haruf’s writing style change from his first novel to his last, the National Book Award finalist Plainsong? What is the effect of Haruf’s style in each and use of language on the reader?

2. How does the small town of Holt figure as a character in each novel? How are the characters in each of the novels completely believable and different? How does Haruf repeat some character traits in his novels and to what effect? How do the characters and the image of the town change from book to book?

Kent Haruf grew up on the high plains of northeastern Colorado, the son of a Methodist minister. He received a B.A. from Nebraska Wesleyan University in 1965 and an M.F.A. from the University of Iowa in 1973. He has worked at a wide variety of jobs, including spending two years with the Peace Corps in Turkey; since 1991 he has taught fiction and fiction writing at Southern Illinois University at Carbondale. Haruf is also the author of The Tie That Binds (1984), the recipient of a Whiting Foundation Award and a special citation from the PEN/Hemingway Foundation, and Where You Once Belonged (1990). His short fiction has appeared in Puerto del Sol, Grand Street, Prairie Schooner, The Gettysburg Review, and The Best American Short Stories. Haruf lives with his wife, Cathy, in Colorado and Illinois. Plainsong, his third novel, was a finalist for the 1999 National Book Award.

Girl in Translation
Back to Top