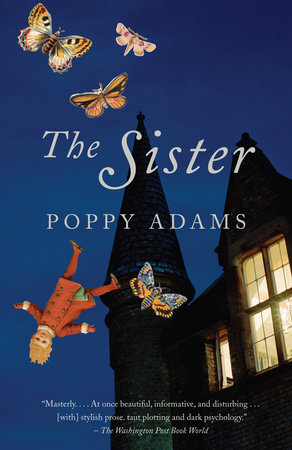 “Masterly. . . . At once beautiful, informative, and disturbing . . . [with] stylish prose, taut plotting and dark psychology.”
—The Washington Post Book World

The introduction, questions, and suggestions for further reading that follow are intended to enhance your group’s discussion of Poppy Adams’s eerie tale of two sisters reunited after nearly fifty years. Set in a decaying Victorian mansion, The Sister bristles with psychological suspense as unspoken resentments and long-buried secrets come to the surface.

1. What is your initial impression of Ginny? Does she appear to be a trustworthy narrator? Are there aspects of her musings as she waits for Vivien that make you dislike or mistrust her?

2. What do the tone and content of Ginny’s description of Vivien’s fall from the bell tower convey about how her mind works [p. 14]? Is her literal, straightforward style characteristic of the way children report an event, or does it seem odd or jarring to you? Do her parents’ reactions [pp. 15–16] reinforce your impressions? What do they reveal about Clive and Maud, both as parents and as individuals?

3. What insights does Ginny’s admission that she, like her father, is "hopeless at social expression" [p. 29] offer into the family dynamics? In what ways does Ginny and Vivien’s relationship mirror their parents’ relationship? Do the similarities between a parent and a child, real or imagined, often divide families into to separate "camps"?

4. In what ways is the condition of Bulburrow Court a metaphor for Ginny’s emotional state? Compare Vivien’s point of view [p. 33] to Ginny’s explanation of why she has stripped the house of its furnishings and closed off many of its rooms [pp. 33–34 and p. 73]. In stressing the practical aspects of her decision, is Ginny suppressing more complicated feelings? Are there hints that she may be aware of the psychological motivations behind her actions?

5. As they become reacquainted, the sisters alternately communicate with warmth and affection and wound each other. Is their behavior typical of sibling relationships? Discuss Ginny’s comment that the sisters’ relationship is "exactly the same as it was half a century ago, as if we’ve not matured at all" [p. 39] in terms of your own family or other long-term relationships.

6. What does Maud’s handling of her daughters’ experiences at school [pp. 40–42, pp. 51–52] reveal about her maternal instincts and strengths? What are the consequences of the choices she makes and her eagerness to create a tightly knit family?

7. Is Clive a passive presence in the household? Ginny claims that "he didn’t have a clue what was going on anywhere in the house apart from his lab" and can’t see "how he could have caused offense to anyone" [p. 83]. Vivi responds: "I’m afraid you’ve got the wrong person, Ginny. Clive could smell a rat in the pantry from that lab." Is Vivien’s far different interpretation of his role in the family closer to your own impressions? Cite the specific incidents or passages that support your point of view.

8. What lessons does Ginny draw from her parents’ frequent lectures about how clever she is while "they never seemed to offer the same compliments to Vivi" [p. 52]? To what extent is her belief that "I’m one of the lucky ones who are carried along and life falls into place" attributable to her upbringing and the distinctions her parents make between the sisters? What other factors play a role in her assumptions?

9. How do Ginny’s reactions to her mother’s decline [p. 111, pp 121–124] and death [pp. 169–171] reflect the emotional currents Maud established in the household? What do her reasons for keeping Maud’s secret from Vivien [p.130] reveal about the detachment and deceptions that Maud and Clive exhibited in their relationships with each other and with the girls?

10. What is the significance of the sisters’ plan to have Ginny carry a baby for Vivien? What qualities does Arthur bring out of each of the sisters? Does the arrangement—as well as the eventual outcome—change your sympathies for either sister? How accurately does Ginny perceive the situation? Discuss the implications of the question she asks many years later: "Could our entire sisterhood have been a farce, years of complicated deception, of endless assurances of love, charm and manipulation, all so that one day she could take what she wanted?" [p. 225].

11. In his research, Clive focuses on imperfect specimens: "If you could work out, he said, how they’d gone wrong, you’d discover a lot more about how nature worked" [p. 54]. What similarities are there between Clive and Ginny’s approach to the study of moths and how Ginny presents her family history? In what ways does Ginny’s ability to manipulate conditions in her scientific studies manifest itself in the methods she employs in hopes of discovering why Vivien has come home?

12. At what point in the novel does Ginny cross the line from eccentricity to something more frightening and disturbing? Does Vivien intentionally provoke her, or does Ginny misinterpret her sister’s behavior?

13. Vivien offers Ginny several opportunities to face the truth about the past. Would Ginny have responded differently if she had been less involved with her father and their shared professional ambitions? If she had more empathy with Maud’s needs and her aspirations for her daughters? Do you think Ginny is emotionally or intellectual capable of seeing the bigger picture?

14. The daily and seasonal rhythm of Clive and Ginny’s work is described in detail. What effect does this have on the flow of the novel? In what ways do the meticulous accounts of the behavior of moths further the sense of anticipation and suspense as the story unfolds?

15. What elements of Ginny’s research create a narrative that runs parallel to—and sheds light on—the human life cycle and the impact of innate characteristics and environment on individuals? How do the scientific descriptions enhance the themes of the novel and your understanding of characters and their actions?

16. How does the author use Ginny’s own voice to expose her limitations as a narrator? How does she bring to life Ginny’s naïveté and the darker, more calculating side of her personality?

17. Is the ending of the novel inevitable? What events foreshadow Ginny’s actions and her ultimate fate?

Poppy Adams has worked as a documentary filmmaker for the BBC and the Discovery Channel. She lives in London, where she is working on her next book.

The Ghost of Greenwich Village

Schooling
Back to Top