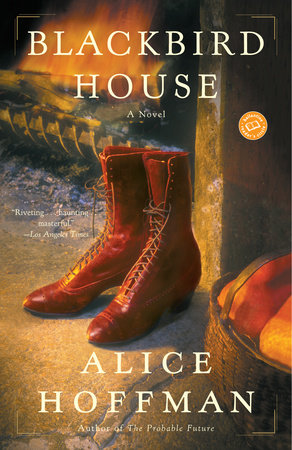 In a rare and gorgeous departure, beloved novelist Alice Hoffman weaves a web of tales all set in Blackbird House. This small farm on the outer reaches of Cape Cod is a place that is as bewitching and alive as the characters we meet: Violet, a brilliant girl who is in love with books and with a man destined to betray her; Lysander Wynn, attacked by a halibut as big as a horse, certain that his life is ruined until a boarder wearing red boots arrives to change everything; Maya Cooper, who does not understand the true meaning of love between her mother and father until it is nearly too late. From the time of the British occupation of Massachusetts to our own modern world, family after family’s lives are inexorably changed not only by the people they love, but by the lives they lead inside Blackbird House.

The questions that follow are designed to enhance your discussion and personal reading of BLACKBIRD HOUSE.

1. How does “The Edge of the World” set the tone for Blackbird House? How would you characterize the house—is it frightening, soothing, mysterious? Did your feelings about the house change as the book unfolded? If so,how?

2. In the opening story, “The Edge of the World,” a fisherman and his son are lost at sea. How do they haunt Blackbird House, both literally and figuratively? In which ways are the other characters, themselves floundering and lost, seeking to be found? What other ghosts—both literal and metaphorical—are present in the book?

3. When Coral finds eggs with holes in “The Edge of the World,” she views them as omens “of lives unfinished.” What other omens does Coral notice? How are these omens similar and different from the signs that Maya’s mother perceives two hundred years later in “India”? How is the white bird an omen?

4. Why do you think that Vincent stays away from his childhood home for so long in “The Edge of the World”?What do you suppose his mother’s reaction is upon his return? Why do you think he is fearless about the sea?

5. The image of drowning courses throughout the book, from the literal loss of life of John and Isaac (in “The Edge of the World”) to Lysander’s accident (“The Witch of Truro”), to the characterization of Emma’s parents as “two drowning people” in “The Summer Kitchen.” What about the act of drowning is so potent in describing loss, either of life or of love? In which other ways does the power of nature play a role in the book?

6. Love at first sight occurs with many of the couples in Blackbird House. Name them. How does this thunderbolt of passion change and shape their lives? Which couple do you think is best suited for one another in the book? The worst? Do you believe in love at first sight?

7. Sibling relationships are very important in Blackbird House. How does sibling rivalry inform some of them,such as Violet’s relationship with Huley (in “Black is the Color of My True Love’s Hair”)? How do siblings form a support network for one another, such as Emma and Walker (“The Summer Kitchen” and “Wish You Were Here”) and Garnet and Ruby (“The Token”)? Which sibling pair do you consider to be the most loving and supportive toward one another? Does one pair remind you of you and your siblings?

8. Sibling relationships are very important in Blackbird House. How does sibling rivalry inform some of them,such as Violet’s relationship with Huley (in “Black is the Color of My True Love’s Hair”)? How do siblings form a support network for one another, such as Emma and Walker (“The Summer Kitchen” and “Wish You Were Here”) and Garnet and Ruby (“The Token”)? Which sibling pair do you consider to be the most loving and supportive toward one another? Does one pair remind you of you and your siblings?

9. “I realized I would have to be careful about who I became,” Garnet says in “The Token.” What drives her toward this revelation? How does Garnet’s relationship with her mother change as a result of it? Who else in the book has an epiphany that’s driven by the behavior of a parent?

10. Why does Larkin promise Lucinda he will “change the world” in “Insulting the Angels”? How is this uncharacteristic of him? What change does Larkin himself want? Why do you think that Lucinda leaves the baby with him and goes off to fight?

11. Violet sees books as a passageway to something greater. How does knowledge broaden her horizons? In what ways does it stifle her? Do you think she’s correct when she wonders, in “Lionheart,” if sending Lion to Harvard was the “greatest mistake she’s ever made”? Why are Lion, and his son after him, so adored by Violet?

12. “When he kissed her, he felt as though he were swallowing sadness,” thinks Lion, Jr., of his love for Dorey (p. 116, in “The Conjurer’s Handbook”). What about Dorey attracts Lion? How does their relationship overcome its mournful circumstances to take flight? What similarities do Dorey and Violet share?

13. How does Maya turn away from her parents in “India”? In what ways does she emulate her brother in her dismissal of what her parents stand for? Do you think they come to a better comprehension of one another after Kalkin’s death? Why or why not?

14. “Loneliness can become nasty and hopeless,” Hoffman writes on page 162. Which characters allow loneliness to fill them with bitterness? In contrast, who enjoys time alone and grows as a result of it?

15. In the book, there’s a reluctance to meddle in the business of others—from “The Wedding of Snow and Ice,”where neighbors ignore the physical abuse occurring next door, to “The Pear Tree,” a chronicle of a family’s struggle with a troubled child. Why is the community so hesitant to become involved in these situations? What about Blackbird House might encourage the isolation of its inhabitants? How is this similar to or different from your personal experiences in a community?

16. How does Jamie’s experience in “The Wedding of Snow and Ice” shape the course of his life? What about it sparks his decision to become a doctor? How is he similar and different to Walker, another young boy (in “The Summer Kitchen”) who decides to enter the medical profession?

17. Emma wishes for “the person she could have been if she hadn’t been stopped in some way” (p. 219) in “Wish You Were Here.” Who else in the book has a dividing line between the person they were and who they are now? Do you have a point in your life that’s as significant? What is it?

18. What compels Emma to reach out to the boy at her door at the end of the book? How does the boy share striking similarities to Isaac in “The Edge of the World”? How does Hoffman bring the story full circle in the novel’s last scene?

Alice Hoffman is the author of sixteen acclaimed novels, including Practical Magic, Here on Earth, Blue Diary, and most recently, The Probable Future. She has also written five books for children. She lives in Cambridge, Massachusetts.


From the Hardcover edition.
Learn More About Blackbird House
print
Back to Top