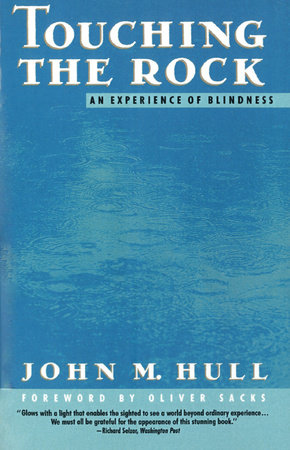 An Experience of Blindness

About Touching the Rock

With a foreword by Oliver Sacks

Shortly after John Hull went blind, after years of struggling with failing vision, he had a dream in which he was trapped on a sinking ship, submerging into another, unimaginable world. The power of this calmly eloquent, intensely perceptive memoir lies in its thorough navigation of the world of blindness—a world in which stairs are safe and snow is frightening, where food and sex lose much of their allure and playing with one’s child may be agonizingly difficult. As he describes the ways in which blindness shapes his experience of his wife and children, of strangers helpful and hostile, and, above all, of his God, Hull becomes a witness in the highest, true sense. Touching the Rock is a book that will instruct, move, and profoundly transform anyone who reads it.

John Hull (1935–2015) was the author and editor of several works on religious education, theology, and disability including Sense and Nonsense About God and God-Talk with Young Children: Notes for Parents & Teachers. Additionally, he served as Emeritus Professor of Religious Education… More about John Hull

“John Hull goes a long way toward taking us with him through his descent into total blindness. . . . He lets us see with no trace of self-pity or self-praise how blindness has become far him a genuine acquisition, an unforeseeably rich gift that has made of him what so few of us are: excellent watchers and hearers of the world . . . triumphant in the teeth of ruin.” —Reynolds Price

“Glows with a light that enables the sighted to a world beyond ordinary experience. . . . We must all be grateful for the appearance of this stunning book.”  —The Washington Post

“In 1983, Hull, a university lecturer who had lived with sight problems from the age of 13, found that the dark discs he had fought for 36 years had finally overwhelmed his sight. The spiritual and emotional reactions to his vision loss form the basis of this poignant memoir, and the many questions he asks contribute to his eventual acceptance of his fate. A richly textured dream life adds to his exploration of the ‘other world’ of blindness, and the understanding and meaning he finds coalesce into a powerful work.” —Library Journal