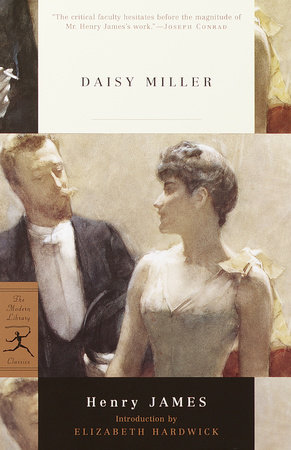 1. Henry James is as much an international writer as an American. Shortly before his death he became a British citizen in protest of America?s unwillingness to come to the defense of Britain and France in the early years of World War I. He spent much of his adult life abroad, observing Europeans, Americans in Europe, and what he called ?Europeanized Americans,? those who had lived for so long in Europe that they had taken on many?although not all?European traits and values. Many of Henry James?s novels and stories depict these three types of characters in interplay. How does James explore the American-
versus-European theme in Daisy Miller? What are some of the ways that the Millers differ from Winterbourne, his aunt, and Mrs. Walker?

2. Henry James was always interested in children and young adults, and Daisy Miller is one of his most successful creations. She is more vibrant than sophisticated, ?a child,? as James describes her, ?of nature and of freedom.? Some have argued that her plain name (the unpretentious flower, the common profession) symbolizes her simplicity. Do you agree with this? Why does Daisy Miller make a full-blooded protagonist? Is Daisy Miller an innocent, unaffected young woman? Are there hints of her self-awareness? Does she demonstrate a desire to manipulate others?

3. In discussing the origins of the novella in his Preface to the New York Edition, Henry James tells of hearing the story of an innocent but eager American girl who has recently visited Italy and ?picked up? a Roman of vague identity. What in this secondhand anecdote do you think appealed to James, inspiring him to, as he put it, ?dramatise, dramatise!? Does James do more than dramatize? Does he moralize?

4. James describes Winterbourne, an American who resides in Geneva, as having ?an old attachment for the little capital of Calvinism.? When James introduces him, Winterbourne is in a hotel lobby in Vevey while he waits for his aunt, who is upstairs. Essentially, however, he is waiting for something else. How would you describe Winterbourne and why do you think he is susceptible to Daisy?s charms? Is he an honest man? How does his surname fit into James?s scheme of identifying characters?

5. Does James present Giovanelli as a complicated, fully imagined character, or is Giovanelli merely the proverbial mysterious stranger? Does James explore Giovanelli?s subtleties with as much insight as he applies to Daisy and Winterbourne? What attracts Daisy to Giovanelli? Is this attraction plausible? Why at the end of the novel does he say, ?If she had lived I should have got nothing. She never would have married me??

6. What do you make of Daisy?s fate? Why do you think James set the novel?s tragic event in the Colosseum?

Ethan Frome
Back to Top