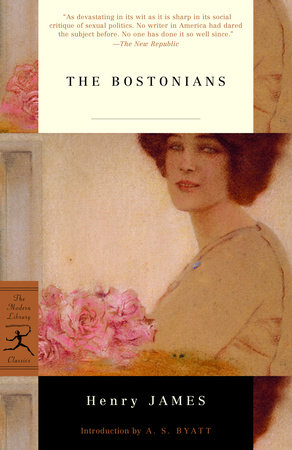 1. “I wished to write a very American tale, a tale very characteristic of our social conditions,” wrote Henry James in one of his Notebooks. How would you describe the social and political climate in New England as depicted in The Bostonians? Consider the profound effects of the recently ended Civil War, as well as the changes wrought by an increasingly industrial society.

2. In A. S. Byatt’s Introduction, she notes that Henry James was raised in a progressive, transcendentalist household, and that he was “able to report the phantasmagoria of spiritual and political abstractions, magnetisms, and influences, with a surefooted realist solidity of specification . . . because it is what he knew best and first. . . . The characters even the southerner, Basil Ransom– are people James was at ease with, could represent economically, precisely, and with wit.” Do you agree? Which of the characters described by Mrs. Luna as “witches and wizards, mediums, and spirit-rappers, and roaring radicals” stand out as the most fully realized? Do any of them strike you as caricatures?

3. According to Alison Lurie, “The central conflict in The Bostonians is over who will have possession of Verena. Because she is naive and passive, her own wishes have little to do with the outcome.” Do you agree? Consider the various characters who battle to control the beautiful young orator: Olive Chancellor, Basil Ransom, the Tarrants, Mr.Burrage and his mother, and Matthias Pardon. How do their motives differ, and what does Verena represent to each of them?

4. Writing about The Bostonians, Irving Howe praises “James’ affectionate rendering of places and scenes. The elegance of Olive Chancellor’s drawing room, the dinginess of the Cambridge street in which the Tarrants live, the glimmering mildness of Cape Cod in the summer . . . The musty mumbling circle of reformers meeting, and sagging, in Miss Birdseye’s rooms . . .” After reading James’s satirical masterpiece, which scenes and locales strike you as the most vivid and memorable?

5. In Chapter 5, James writes that Olive “knew her place in the Boston hierarchy, and it was not what Mrs. Farrinder supposed; so that there was a want of perspective in talking to her as if she had been a representative of the aristocracy. . . . Olive Chancellor seemed to herself to have privileges enough without being affiliated to the exclusive
set and having invitations to the smaller parties, which were the real test.” Can you find other examples of a defined social hierarchy in The Bostonians? How would you compare Olive’s views on class structure with the social aspirations–or lack thereof–of Mrs. Luna, Miss Birdseye, Dr. Prance, and Mrs. Tarrant?

6. Much has been written about the closing line of The Bostonians: “It is to be feared that with the union, so far from brilliant, into which [Verena] was about to enter, these were not the last [tears] she was destined to shed.” What do you imagine the future holds for Verena, Basil, and Olive?

7. When The Bostonians was first published, in 1886, it was deemed a critical and commercial failure in America. Why do you think James’s nineteenth-century contemporaries found the novel so distasteful? Was it the author’s colorful characterization of the women’s suffrage movement or his depiction of a “Boston marriage” between Olive and Verena? Was it his depiction of a bitter struggle between a northerner and a southerner, so soon after the Civil War? As a modern reader, did you find the author’s satirical portrait of the women’s suffrage movement or Basil Ransom’s antifeminist arguments offensive? Are the viewpoints expressed in the novel still relevant today?

Learn More About The Bostonians
print

The Red Badge of Courage and Other Stories
Stephen Crane

The History of Tom Jones, a Foundling
Henry Fielding

The Moon and Sixpence
W. Somerset Maugham
Back to Top