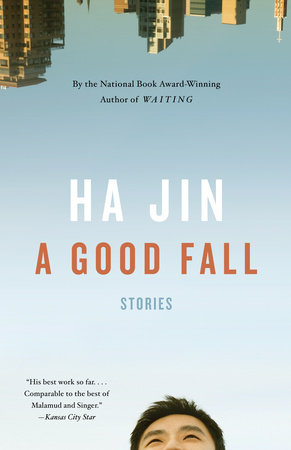 The introduction, discussion questions, and suggested further reading that follow are designed to enhance your group’s discussion of Ha Jin’s A Good Fall, a collection of stories about Chinese immigrants by the award-winning author of Waiting and A Free Life.

Set in the large Chinese enclave of Flushing, Queens, the 12 stories in A Good Fall explore the complicated, conflicted, stressful experiences of Chinese immigrants caught between past and future, China and America, the dream of a new life and the hard-edged reality of their present circumstances.

Many of the characters in these stories occupy a cultural and emotional transitional space, struggling to create new identities in America but not entirely free from the gravitational pull of their pasts, their families, and their homeland. For some, the distant homeland is altogether too close. The narrator of the opening story, “The Bane of the Internet,” is besieged by e-mails from her sister back in China asking for $10,000 to help her buy a car. Because of the Internet, she feels that her family might as well live nearby. In “Temporary Love,” Zuming tells Lima: “From now on I won’t date a Chinese woman again. Just sick of it—every Chinese has so much baggage of the past, too heavy for me to share and carry. I want to live freely and fearlessly with nothing to do with the past” (page 193).

The desire to live freely and fearlessly proves elusive for the immigrants in Jin’s stories. They may wish to escape the past and achieve prosperity, or at least stay out of poverty, but the promise of America is in most cases considerably more complicated than advertised. In “The Beauty,” Gina literally transforms herself through plastic surgery. She erases her past and her former identity as a homely girl from a small town, but once her deception is discovered, her husband nearly leaves her and feels justified in beginning his own deception. In “The House Behind a Weeping Cherry,” three young Chinese girls become prostitutes in order to survive and send money home to their families. In “A Pension Plan,” Niu makes a desperate bid for financial security, quits her job, and vows, “If I can’t speak enough English to work for a unionized company, I’ll starve and die!” (page 173). And in the collection’s masterful title story, a monk/martial arts teacher swindled out of his salary is driven to attempt suicide.

Indeed, money problems plague nearly all the characters in A Good Fall, but anxiety about money is only the external reflection of the inner struggles, the sense of exile, that afflict them. Unmoored from the customs and culture of China, many of Ha Jin’s protagonists find the stress and alienation of life in America almost unbearable. And yet these immigrants demonstrate an extraordinary resilience, a determination to solve their problems, to push through their hardships—in whatever way they can—that is truly remarkable.

And in Ha Jin’s vivid, understated, and unflinching prose, their conflicts, defeats, and successes take on a shimmering immediacy. Though confined to one city and one ethnic group, these stories illuminate many of the struggles that all immigrants must face.

1. In the opening story of A Good Fall, the narrator thinks: “I used to believe that in the United States you could always reshape your relationships with the people back home—you could restart your life on your own terms. But the Internet has spoiled everything—my family is able to get hold of me whenever they like. They might as well live nearby” (pp. 5–6). In what other stories does the theme suggested in this passage—the desire to escape the past and start a new life in America—appear?

3. The main characters in the stories of A Good Fall are, in many ways, quite different from one another, running the gamut from an English professor to a prostitute. In what ways are they and their situations similar?

4. In “A Composer and His Parakeets,” Fanlin is composing the music for an opera in which the hero claims that “greatness in art is merely an accident.” But Fanlin cannot accept this idea and feels that “no art should be accidental” (p. 12). What accidents in the story inspire Fanlin’s own artistic creation? In what other stories do accidents play a major role?

5. What expectations do the protagonists of these stories bring to the United States? In what ways are those expectations frustrated or fulfilled?

6. How do the characters in these stories try to solve the dilemmas they find themselves in? What are some examples of their resilience and resourcefulness?

7. In “A Pension Plan,” Minna tells Niu, “I do trust you, Aunt Niu, but we’re in America now, where even the air can make people change” (p. 170). How are the main characters in these stories changed by America? How does being in American change the way they view their homeland?

8. How does America appear as seen through the eyes of the Chinese immigrants in A Good Fall? What challenges and opportunities does America present for them?

9. In “Temporary Love,” Lina’s husband essentially blackmails her into paying for his business school tuition. In what other stories are characters pressured financially or treated unfairly over money?

10. What are the pleasures of Ha Jin’s storytelling style? How does he manage to make his writing at once so simple and so engaging?

11. Short stories generally revolve around a conflict that is introduced, developed, and then either resolved or left open. What kinds of conflicts occur in the stories of A Good Fall? Which stories exhibit strong closure? Which ones are more open-ended?

12. How has Ha Jin ordered the stories in A Good Fall? Is there a clear progression? Why would he end the collection with a story in which the protagonist attempts to kill himself?

13. Much of what happens in the book is peculiar to Chinese immigrants, but what aspects of these stories might be true of the immigrant experience more generally?

14. The stories in A Good Fall are pervaded by anxiety and an often brutal struggle to survive. What moments of tenderness and compassion stand out?

15. How might these stories be received by Chinese contemplating emigration to the United States?

Ha Jin left his native China in 1985 to attend Brandeis University. He is the author of the internationally bestselling novel Waiting, which won the PEN/Faulkner Award and the National Book Award, and War Trash, which won the PEN/Faulkner Award for Fiction, and was a finalist for the Pulitzer Prize and the Kiriyama Pacific Rim Book Prize; the story collections The Bridegroom, which won the Asian American Literary Award, Under the Red Flag, which won the Flannery O’Connor Award for Short Fiction, and Ocean of Words, which won the PEN/Hemingway Award; the novels The Crazed and In the Pond; and three books of poetry. His latest novel, A Free Life is his first novel set in the United States. He lives in the Boston area and is a professor of English at Boston University. War Trash, The Crazed, The Bridegroom, Waiting, In the Pond, A Free Life, and Ocean of Words are available in paperback from Vintage Books.

I Am an Executioner
Rajesh Parameswaran

In the Country
Mia Alvar

The One Inside
Sam Shepard

Let Me be the One
Elisabeth Harvor

A Postcard for Annie
Ida Jessen

Love in a Fallen City
Eileen Chang
Back to Top