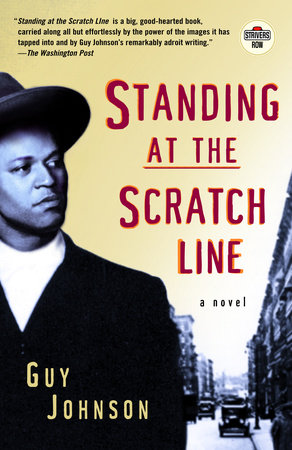 The questions and discussion topics that follow are intended to enhance your group’s reading of Guy Johnson’s Standing at the Scratch Line. We hope they will provide new insights and ways of looking at this epic novel.

1. The period between World War I and World War II was a time when African-Americans began experiencing real gains in their status and wealth, but it was accompanied by equally vicious reprisals on the part of whites. King represents this spirit of rebelliousness and his success is met with jealousy and reprisals. Why do his enemies react with such vehemence toward him? He inspires fear in many; does he inspire love? Do you like or dislike King? Why?

2. When we first encounter King, he is a teenager living in Louisiana; from there he travels to France, New York, Louisiana, Oklahoma, and finally to San Francisco. Each of these places represents a different
stage of his life, from the anger and naivete in the bayous of his youth to his becoming the seasoned businessman of San Francisco. How does King evolve as he moves from one place to another? What remains the same? What changes?

3. King’s attempt to live life on his own terms inevitably clashes with others’ inability to accept his authority or his race. He cannot seem to stay in one place or out of conflict for too long. Despite all the trouble it causes, is this unwillingness to compromise the key to his success? What does this say about his future? How is his son Jack different from him?

4. When Serena discovers Mamie’s picture in her husband’s possession she becomes fixated on Mamie’s color. Are Serena’s feelings sparked by jealousy or hate? What role does color play in black society at that time? In the present?

5. King does not shrink from violence and feels no hesitation about using it against anyone who threatens him. Interestingly, King rarely initiates violence but automatically reverts to it when provoked. Is King the cause of his violent altercations or is he simply reacting? Are his actions justified? Do you think that Sergeant McGraw got what he deserved?

6. Having spent much of her youth escaping from under the shadow of her father, Serena feels she has left her past behind by marrying King. But it is King who later accuses her of following her father’s example. Is this true? Why does she choose to withhold information regarding King’s first son even when it becomes apparent that her children may die as a result? What about Serena and King are so different?

7. King feels little remorse at killing those he thinks are a threat to him, but when people close to him are hurt or killed as a result of his actions, he is pained. How does King deal with the death of those like Uncle Jake and Professor? Do the deaths of his family and friends affect his behavior in any way? Does he accept responsibility for them?

8. Mace, the mayor of Bodie Wells, resembles King in spirit and courage but differs in his loyalties. Where King claims no permanent attachments, Mace has deep roots in Bodie Wells. When King kills a deputy, Mace accuses him of unnecessarily jeopardizing the town. King claims the townsfolk’s cautious and conciliatory ways only invite further trouble. What makes it easier for King to say this than Mace? What are the costs of action or inaction? Why did black townships cease to exist?

9. What kinds of characters do Mace, Professor, Phillip, and his father, Claude, represent?

10. What does King’s relationship with Sampson reveal about him?

11. Many of King’s targets initially discount his role in their destruction because of his race, only to realize too late that he has capitalized on the arrogance of their own racism. Johnson alludes to the black community’s long history of guerilla warfare and sabotage during slavery and beyond. Discuss this legacy of resistance through manipulation and subversion. How do the characters in Standing at the Scratch Line adopt it?

12. Johnson covers a wide range of the history in Standing at the Scratch Line, moving from Louisiana in 1916 to California in the 1940s. Describe the changes we see in American society in that time. How do the fortunes of King and Serena mirror these changes?

13. What compels King to act the way he does?

14. Do you feet this novel accurately reflects the racism and prejudice that African-Americans experienced in this country?

Learn More About Standing at the Scratch Line
print

Shannon
Back to Top