Half of a Yellow Sun Reader’s Guide 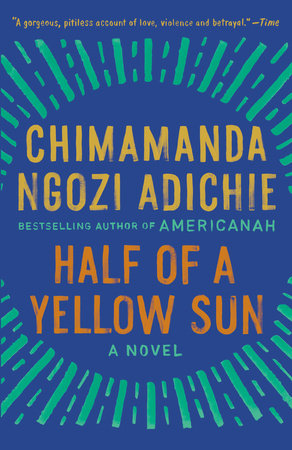 Half of a Yellow Sun Reader’s Guide

print
Half of a Yellow Sun Reader’s Guide

“A gorgeous, pitiless account of love, violence and betrayal during the Biafran war.”
—Time

The questions, discussion topics, and suggestions for further reading that follow are intended to enhance your group’s conversation about Half of a Yellow Sun, a richly imagined story of the disastrous war between Nigeria and Biafra, largely forgotten in the West, which won the 2007 Orange Prize in Britain and was a finalist for the National Book Critics Circle Award.

Half of a Yellow Sun returns to a critical moment in the modern history of Nigeria, a time shortly after gaining their independence from Britain when, following a massacre of their people, the Igbo tribes of the southeast seceded and established The Republic of Biafra. Three years of civil war followed as Biafra was slowly strangled into submission by violence and famine. Over a million people died, including Chimamanda Ngozi Adichie’s two grandfathers.

With astonishing empathy and the effortless grace of a natural storyteller, Adichie weaves together the lives of three characters swept up in the turbulence of the war. Thirteen-year-old Ugwu is employed as a houseboy for Odenigbo, a pan-Africanist university professor full of revolutionary zeal. His beautiful girlfriend Olanna is the London-educated daughter of a tribal chief turned businessman, who has abandoned her life of privilege in Lagos for the charisma of her new lover. And Richard Churchill is a shy but handsome English writer in love with Olanna’s cool, sardonic, and less beautiful twin sister Kainene. As Nigerian troops advance and the characters must flee from murderous armies, their ideals are severely tested, as are their loyalties to one another.

Epic, ambitious, and triumphantly realized, Half of a Yellow Sun is a remarkable novel about moral responsibility, the end of colonialism, ethnic allegiances, class and race–and the ways in which love can complicate them all. Adichie brilliantly evokes the promise and the devastating disappointments that marked this time and place, bringing us one of the most powerful, dramatic, and intensely emotional pictures of modern Africa that we have ever had.

1. Ugwu is only thirteen when he begins working as a houseboy for Odenigbo, but he is one of the most intelligent and observant characters in the novel. How well does Ugwu manage the transition from village life to the intellectual and privileged world of his employers? How does his presence throughout affect the reader’s experience of the story?

2. About her attraction to Odenigbo, Olanna thinks, “The intensity had not abated after two years, nor had her awe at his self-assured eccentricities and his fierce moralities” [p. 36]. What is attractive about Odenigbo? How does Adichie poke fun at certain aspects of his character? How does the war change him?

3. Adichie touches very lightly on a connection between the Holocaust and the Biafran situation [p. 62]; why does she not stress this parallel more strongly? Why are the Igbo massacred by the Hausa? What tribal resentments and rivalries are expressed in the Nigerian-Biafran war? In what ways does the novel make clear that these rivalries have been intensified by British interference?

4. Consider the conversation between Olanna and Kainene on pp. 130-131. What are the sources of the distance and distrust between the two sisters, and how is the rift finally overcome? What is the effect of the disappearance of Kainene on the ending of the story?

7. Adichie breaks the chronological sequence of her story so that she can delay the revelation that Baby is not Olanna’s child and that Olanna had a brief liaison with Richard. What are the effects of this delay, and of these revelations, on your reading experience?

8. Susan Grenville-Pitts is a stereotype of the colonial occupier with her assertion that “It’s quite extraordinaryÉ how these people can’t control their hatred of each other. . . . Civilization teaches you control” [p. 194]. Richard, on the other hand, wants to be African, learns to speak Igbo, and says “we” when he speaks of Biafra. What sort of person is Richard? How do you explain his desires?

9. Adichie makes a point of displaying Olanna’s middle-class frame of mind: she is disgusted at the cockroach eggs in her cousins’ house reluctant to let Baby mix with village children because they have lice, and so on. How is her privileged outlook changed by the war?

10. The poet Okeoma, in praise of the new Biafra, wrote, “If the sun refuses to rise, we will make it rise” [p. 219]. Does Adichie seem to represent the Biafran secession as a doomed exercise in political na•vet? or as a desperate bid for survival on the part of a besieged ethnic group? Given the history of Nigeria and Britain’s support during the war, is the defeat of Biafra a foregone conclusion?

11. The sisters’ relationship is damaged further when Olanna seduces Richard [p. 293]. Why does Olanna do this? If she is taking revenge upon Odenigbo for his infidelity, why does she choose Richard? What does Kainene mean when she bitterly calls Olanna “the good one” [p. 318]?

12. How does being witnesses to violent death change people in the story—Olanna, Kainene, Odenigbo, Ugwu? How does Adichie handle descriptions of scenes of violence, death, and famine?

14. The novel is structured in part around two love stories, between Olanna and Odenigbo and between Kainene and Richard.  It is “really a story of love,” Adichie has said (Financial Times, September 9, 2006). How does Adichie handle romantic and sexual love? Why are these love plots so important to a novel about a war?

15. The story begins as Ugwu’s aunty describes to Ugwu his new employer: “Master was a little crazy; he had spent too many years reading books overseas, talked to himself in his office, did not always return greetings, and had too much hair” [p. 3]. It ends with Ugwu’s dedication of his book: “For Master, my good man” [p. 541]. Consider how Ugwu’s relation to his master has changed throughout the course of the story.

16. How is it fitting that Ugwu, and not Richard, should be the one who writes the story of the war and his people?

17. In a recent interview Adichie said, “My family tells me that I must be old. This is a book I had to write because it’s my way of looking at this history that defines me and making sense of it.” (She recently turned twenty-nine, and based parts of the story on her family’s experiences during that time and also on a great deal of reading.) “I didn’t want to just write about events,” Adichie said. “I wanted to put a human face on them” (The New York Times, September 23, 2006). Why is it remarkable that a woman so young could write a novel of this scope and depth?

Chimamanda Ngozi Adichie grew up in Nigeria, where she attended medical school for two years at the University of Nigeria before coming to the United States. A 2003 O. Henry Prize winner, Adichie was shortlisted for the 2002 Caine Prize for African Writing. Her work has been selected by the Commonwealth Broadcasting Association and the BBC Short Story Awards and has appeared in various literary publications, including Zoetrope and The Iowa Review. Her first novel, Purple Hibiscus, was shortlisted for the Orange Prize and the John Llewellyn Rhys Prize, and longlisted for the Booker. She now divides her time between the United States and Nigeria.

Chris Abani, Graceland; Chinua Achebe, Things Fall Apart; William Boyd, A Good Man in Africa; Kiran Desai, The Inheritance of Loss; Frederick Douglass, The Narrative of the Life of Frederick Douglass, An American Slave; Dave Eggers, What Is the What; Amitav Ghosh, The Shadow Lines; Graham Greene, The Heart of the Matter; Barbara Kingsolver, The Poisonwood Bible; Rohinton Mistry, Family Matters; V. S. Naipaul, A Bend in the River; Ben Okri, The Famished Road; Wole Soyinka, The Man Died.
Learn More About Half of a Yellow Sun
print

The Forty Rules of Love

A Brief History of Seven Killings
Back to Top