Nothing to Be Frightened Of Reader’s Guide 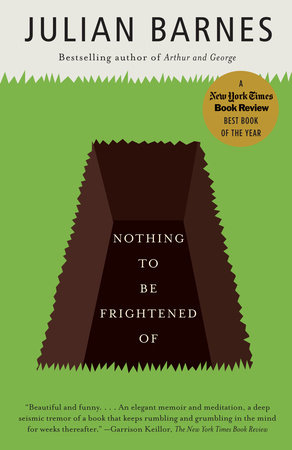 Nothing to Be Frightened Of Reader’s Guide

print
Nothing to Be Frightened Of Reader’s Guide

“Beautiful and funny. . . . An elegant memoir and meditation, a deep seismic tremor of a book that keeps rumbling and grumbling in the mind for weeks thereafter.”
—Garrison Keillor, The New York Times Book Review

The introduction, questions, and suggestions for further reading that follow are designed to enliven your group’s discussion of Julian Barnes’s extraordinary memoir Nothing to Be Frightened Of.

Montaigne suggested that we keep the thought of death always before us. And Julian Barnes, in this elegant, probing, unflinchingly honest meditation on death and the fear of death, seems to have followed Montaigne’s advice, albeit involuntarily. Barnes’s fear of death is extreme and unrelenting. He speaks of suddenly waking in the middle of the night screaming, “Oh, no!” Nor are his fears amenable to the comforting vision of the afterlife proffered by Christianity or to the various consolations scientists, thanatologists, and self-help gurus have devised to fill the void.

Instead, Barnes turns to the novelists, poets, composers, and philosophers he most admires, from Montaigne and Jules Renard to Stendhal, Flaubert, Shostakovich, Zbigniew Herbert, Somerset Maugham, Philip Larkin, his brother (the philosopher Jonathan Barnes), and many others. Like Flaubert, who “never lost the realist’s need, and demand, to look where others averted their gaze,” Barnes feels it a human and writerly duty to investigate our mortal limit [p. 95]. He looks long and hard at death, considering it from all angles, asking whether it would be better to know the time and manner of one’s death or to be surprised; if a sudden or protracted death is preferable; if it is better to live in a continual awareness of death or as if one would live forever; and most importantly, what it might mean be to have a “good death”—to die honorably, to die “in character.”

What makes Nothing to Be Frightened Of such a formidable and surprisingly enjoyable work is Barnes’s refusal to be easily or falsely consoled and his willingness to see the humor, dark as it is, in the human predicament. He lays out with great care what seem like helpful strategies for dealing with the fear of death, and then just as carefully shows why they don’t really work—in his case, and perhaps in ours as well. Barnes is not so eager to allay his fears that he will violate his intellectual integrity. Indeed, it is rare to see a writer of such stature write about fears he finds absolutely harrowing with such intrepid honesty and clarity. And by placing his own fears in the context of some of the most engaging thinkers that have turned their attention to death, Barnes lifts his meditation beyond the merely personal—his subject is, after all, one that everyone must face.

It is hard to say whether or not, after 244 pages of clear-eyed self-examination and lucid, nimble prose; Barnes has eased his own fears. But he has certainly named them, held them up to the light of reason, and invited his readers, at least those who possess the necessary courage, to do the same.

1. Nothing to Be Frightened Of opens with an arresting sentence: “I don’t believe in God, but I miss Him” [p. 3]. How is it possible to both miss God and not believe in him? Is Julian Barnes’s brother, Jonathan, right in regarding such a sentiment as “soppy”?

2. How does Barnes manage to make a 244-page book about death and the fear of death such an enjoyable read? What is appealing about his voice throughout the book? What are some of the more humorous moments in Nothing to Be Frightened Of?

3. Barnes writes that: “For me, death is the one appalling fact which defines life” [p. 124]. Why does he feel this way? In what ways does death “define life”? Why would life become intolerable without the prospect of death?

5. “We encourage one another,” Barnes writes, “towards the secular modern heaven of self-fulfillment: the development of the personality, the relationships which help define us, the status-giving job, the material goods, the ownership of property, the foreign holidays, the acquisition of savings, the accumulation of sexual exploits, the visits to the gym, the consumption of culture. It all adds up to happiness, doesn’t it—doesn’t it? This is our chosen myth” [p. 59]. Why does the secular myth of self-fulfillment fail to ease the fear of death?

6. What examples does Barnes give of people who have died “in character”? Why does he admire this ability to stay true to one’s nature in the face of death?

7. Barnes examines what such writers and composers as Jules Renard, Alphonse Daudet, Stravinsky, Shostakovich, Somerset Maugham, Stendhal, A. J. Ayer, Montaigne, Sherwin Nuland, Philip Larkin, and others have written about death. Is he able to draw any comfort from their words?  On what grounds does he reject most of these arguments? Which of their arguments about how to best approach death does he find most helpful?

8. Barnes observes that when writers “venture out into the world, they regularly behave as if they have left all their comprehension of human behaviour stuck in their typescripts” [p. 126]. Why is it that writers demonstrate so much understanding of human behavior in their writing and so little in their lives?

9. In what ways is Nothing to Be Frightened Of a book about the art of fiction as well as a book about death? What connections does Barnes make between narrative art and death? Between novelists and religions?

11. After considering Rossini’s Petite Messe Solennelle, Barnes writes, “The artist is saying: display and bravura are tricks for the young, and yes, showing off is part of ambition; but now that we are old, let us have the confidence to speak simply. . . .  This is not just humility in the face of eternity; it is also that it takes a lifetime to see, and say, simple things” [p. 194]. Why would it take a lifetime to learn to see and say simple things? In what ways has Barnes himself, despite his obvious erudition, mastered the art of speaking simply? What are some of the pleasures of Barnes’s prose style?

12. Barnes quotes Shostakovich who said that the fear of death is probably the deepest feeling we have and that “the irony lies in the fact that under the influence of that fear people create poetry, prose and music; that is, they try to strengthen their ties with the living and increase their influence on them” [p. 200]. Why would the fear of death inspire people to create works of art? How does Barnes respond to Shostakovich’s remark?

13. How does Barnes regard his parents’ deaths? What effect do they have on his own fear of death?

14. Barnes asserts that “the ingenious human animal is well capable of constructing civilizations where religion coexists with frenetic materialism (where the former might even be an emetic consequence of the latter): witness America” [p. 60]. Is Barnes right in suggesting that religion in America is a nauseating consequence of our insatiable materialism? What evidence can be found to support such a view?

15. What does the inclusion of the views of Barnes’s philosopher brother add to the texture of the book? How does Jonathan Barnes’s sensibility differ from Julian’s?

16. After 244 pages of musing on death does Barnes seems any less anxious about it? Has his thinking about or fear of death changed over the course of the book?

Julian Barnes is the author of ten novels, two books of stories, two collections of essays, and a translation of Alphonse Daudet’s In the Land of Pain. His honors include the Somerset Maugham Award, the Geoffrey Faber Memorial Prize, and the E. M. Forster Award from the American Academy of Arts and Letters. In 2004 he was named Commandeur de l’Ordre des Arts et des Lettres by the French Ministry of Culture. He lives in London.

Diana Athill, Somewhere Towards the End; Ernest Becker, The Denial of Death; Joan Didion, The Year of Magical Thinking; William Faulkner, As I Lay Dying; Sherwin B. Nuland, How We Die; Philip Roth, Everyman; Leo Tolstoy, The Death of Ivan Ilych; Jules Renard, The Journal of Jules Renard
Learn More About Nothing to Be Frightened Of
print

The Moth Presents: All These Wonders

Phosphorescence
Back to Top