The Uses of Enchantment Reader’s Guide 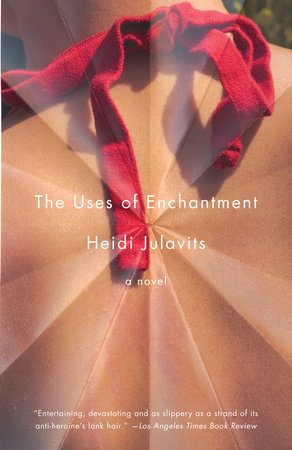 The Uses of Enchantment Reader’s Guide

“A novel of ideas that moves with the speed and inevitability of a freight train. . . . Entertaining, devastating and as slippery as a strand of its anti-heroine’s lank hair.”
—Los Angeles Times Book Review

The introduction, discussion questions, and suggestions for further reading that follow are designed to enhance your group’s conversation about Heidi Julavits’s The Uses of Enchantment.

One Autumn day in 1985, sixteen-year-old Mary Veal vanishes from her Massachusetts prep school. A few weeks later she reappears unharmed and with little memory of what happened to her–or at least little that she is willing to share.

Was Mary abducted, or did she fake her disappearance? This question haunts Mary’s family, her psychologist, even Mary herself. Weaving together three narratives, The Uses of Enchantment conjures a spell in which the hallucinatory power of a young woman’s sexuality, and her desire to wield it, has devastating consequences for all involved.

1. Does Mary’s subterfuge with Dr. Hammer imply a criticism of therapy in general?

2. Why does Mary plagiarize Dora’s story? Does she really lack imagination, as her mother believes? Or is there another reason she co-opts Dora’s story?

3. How would Mary’s experience in therapy have been different if Dr. Hammer were a woman? Would Roz Biedelman have been a better therapist for Mary?

4. How does the New England setting and the town’s proximity to the Salem witch trials complicate Mary’s “crime”?

5. What is the emotional legacy of Abigail Lake, and how does it differently affect Mary, her sisters, and her mother?

6. Is Dr. Hammer just trying to further his career, as everyone suggests? Is Mary his victim, or is he her victim?

7. Mary’s relationship, or non-relationship, with her mother, is a key element in the book. Is Paula Veal to blame for what happens to Mary? Should she have forgiven her daughter?

8. Has “the girl,” Mary, been abducted by the man, or is the man her hostage? Who, in the end, has victimized whom?

9. In the What Might Have Happened chapters, are we meant to believe that this IS what happened to Mary? Or is this Mary’s fantasy of what happened? Or is it possibly even Dr. Hammer’s version of what happened? How do the shifting points of view (from the girl’s to the man’s) suggest one interpretation over another?

10. Books are important to Mary, but especially those that she has never read. What is the function of these books? Does it matter that the reader never really knows what’s inside of those books either? Can books sometimes exude more power if they remain unread?

11. Are we meant to believe Mary’s reason for explaining why Paula Veal cut her daughters out of her will (except for the painting of Abigail Lake)? Did she forgive Mary? Does it matter one way or the other what she intended?

Heidi Julavits is the author of two previous novels, The Mineral Palace and The Effect of Living Backwards, as well as a collaborative book, Hotel Andromeda, with the artist Jenny Gage. She is a founding editor of The Believer, and her writings have appeared in Esquire, Time, The New York Times, McSweeney’s among other places. She lives in Manhattan and Maine.

The Quality of Silence

The Man in the Crooked Hat

The Girl I Used to Be

The Last Woman in the Forest
Back to Top