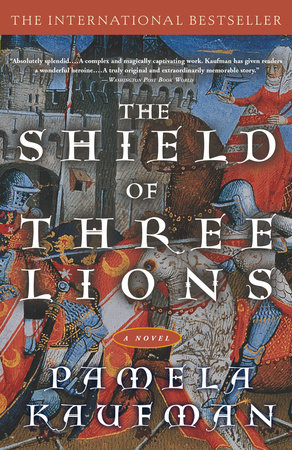 Shield of Three Lions unfurls amidst the plagues, poxes, sackings, banquets, leeches, jousts, and processions of Medieval England–and tells the fresh, at times hilarious tale of an unflappable heroine caught in a web of politics, sex, and psychology. Alix of Wanthwaite, a breathtaking beauty disguised as a boy; Enoch Angus Boggs, a wiley Scot with nothing to lose; and King Richard the Lionheart, a lusty monarch in the throes of a bloody crusade, form an unlikely triangle of desire and manipulation in this sexy, inventive, coming-of-age story. Nearly twenty years after its original publication, Pamela Kaufman’s first novel remains crisp, pitch-perfect, and tender in its shrewd understanding of love and the endless quest for an irrefutable identity. This guide is designed to help direct your reading group’s discussion of Shield of Three Lions.

Loving parents, doting servants, natural beauty, a landed castle, and a loyal pet wolf all make Alix of Wanthwaite’s life seem enchanted. But when brutal marauders destroy her home and murder her family, Alix’s world turns inside out in the course of an hour. Armed only with hellfire determination, a cleverness beyond her pre-adolescent years, and a set of boy’s clothes, Alix sets out to demand justice from the king himself, hundreds of miles away. Joining forces with a traveling Scotsman named Enoch, a mysterious ruffian with ambitious goals of his own, Alix finds herself caught in an adventure so tangled that her dreams of restoring her home must take a back seat to the priority of staying alive–and staying in her king’s good favor. From the universities of Paris, to the tents of famed troubadours, to the Holy Land of crusade-scarred Jerusalem, Alix travels incognito as a boy, seeking Richard the Lionheart’s help with her dilemma, only to discover that Richard has other plans for her, plans she dare not refuse without revealing her real identity. And as she blossoms into a stunning young woman, Alix must struggle to hide her true sex from the two men who know her–and want her–most intimately. In a novel as bawdy as the Canterbury Tales, yet heartbreakingly tender, Pamela Kaufman conjures an utterly captivating heroine and a fascinating landscape of treachery, scandal, and redemption.

1. Enoch strikes Alix as an outlandish savage when he first enters the story. “Mounted on a monstrous plodding white mule, he looked to be a bull more than a man–a huge menacing form emitting deafening shrieks… ” What do you think of Enoch? How does Kaufman use Enoch’s sense of humor as a device to develop his character? Why does he immediately commit to protecting Alix as they begin their journey? Is it his kind heart or his keen opportunism at work?

2. Young Alix’s initiation into the world of sex is the brutal rape and murder of her friend and milk-sister, Maisry. She then goes on to witness bawdy whorehouses, desperately unhappy but necessary royal couplings, Enoch’s casual sexual dalliances, the licentious attentions of her pedophile king, and Queen Eleanor’s “Rules” governing ecstatic, adulterous love. Combined with memories of her own parents’ happy marriage, these contradictory messages about sex leave Alix totally confused. Does she ever sort it all out?

3. In the first seventy pages of the novel, Alix lies to Dame Margery about why Maisry died, lies to her father about how her mother died, and lies to Enoch about splitting Wanthwaite with him. Are these lies justified, or does Alix have a problem dealing with the truth? Do her lies ever cause real trouble? Her adventure comes full circle when she lies about being raped by Lord Roland, thereby causing his death and avenging her mother and Maisry. Could she have cornered him any other way? Do you think she does the right thing?

4. What guidance does Alix’s mother provide her from beyond the grave? Is it useful?

5. In Paris, Enoch and Alix study law with the famous Master Malcolm. What does Alix learn during his lectures that she uses later? Why does Enoch insist that they take the time to study despite their rush toward the king?

6. What does Zizka want with Alix? Why is she perfect for the job at hand? What advice does Zizka give Alix before her private audience with the king? Does she heed it? Is she correct in her hunch that Zizka feels guilty about something?

7. What does Alix learn about love, politics, and women’s rights from Princess Alais of France? What is the significance of Alais’s comment, “’Tis a glorious occasion,” as she watches Richard’s entry into Paris? Why does Alix repeat the same comment as she attends Richard’s wedding to Berengaria more than a year later?

8. Despite her naivet? and lack of experience, Alix is a solid judge of character. She can see Richard’s duplicities, his cruelties as a ruler, and his weaknesses as a man. Why does she still fall for him?

9. What grave mistake does Alix make when she begs Richard for a writ naming her the sole heir to Wanthwaite? What advantage would she have gained had she presented Enoch to Richard as her older brother? Is it greed or ignorance that guides her? Does Richard have any intention of bestowing Wanthwaite on her when her tenure as a page is over?

10. When Wanthwaite is sacked by Osbert, Lord of Northumberland, why does Alix’s father insist that she go to King Henry for help, rather than to the local Assize court for intervention? What makes him think Henry will care? What law has Osbert broken?

11. From the very opening of the story, when Alix convinces Maisry that they “deserve” a forbidden outing despite the danger, we see Alix’s sense of self-importance and entitlement. Does she grow out of her self-absorption?

12. A very fine line separates Alix’s hatred for Enoch, and her adoration of him. She manages to blame him for nearly every misadventure in the novel, yet she can’t function without him. Do you think she is too hard on him? Does he love her all along, or does his love blossom after he realizes she’s a girl?

13. Richard is a master of transformation, shifting from ruthless warrior to gracious host to lovesick boy, and back again, in the blink of an eye. Who is the real Richard–arrogant, power-mad despot? Or tragic, guilt-ridden monarch with bad luck? Do you find his feelings for Alix distasteful? In what ways can you identify with him?

14. Alix’s convoluted journey is one long attempt to regain her own home, and could be read as a metaphor for her search to know and understand herself. Because she leaves all semblance of a normal life while still a child and grows up in disguise, she has no chance to grow into her own identity. Discuss her revelation before her wedding day: “Poor Enoch, mourning the loss of Alex. Poor Alix, competing with the Alex who’d never been, first with Richard, now with the Scot.”

15. When Enoch rescues Richard and Alix during a skirmish with peasants, the king is enraged to discover that Enoch has been keeping guard over Alix even while she’s in the king’s company. The two men nearly come to blows. What is this fight really about? Is Richard’s pride wounded because he’s unable to defend himself in battle, or is he angry at Enoch’s disobedience, or is this an expression of jealousy over Alix?

16. Where does Kaufman use humor about Medieval medicine and religion to embellish her story?

PRAISE FOR SHIELD OF THREE LIONS

“Richly rewarding…superbly written…stunning…astute…the richness of the characters, the historical details, and the story as a whole make this novel a memorable reading experience.”–Chicago Sun-Times

PAMELA KAUFMAN, Ph.D., teaches English literature and film and created the Communications Department at Santa Monica College. She is the author of the bestselling medieval novels, Banners of Gold and The Book of Eleanor. She lives in Los Angeles.
Learn More About Shield of Three Lions
print

Knights of the Black and White

Standard of Honor
Back to Top