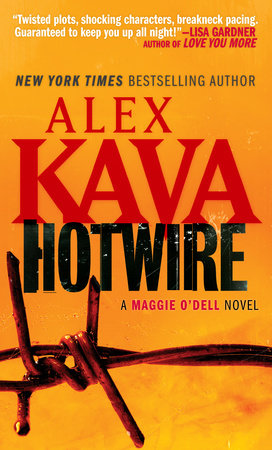 Special Agent Maggie O’Dell, fresh from a grisly homicide investigation in the heart of a hurricane in coastal Florida, suddenly finds herself catapulted to the vast wilds of the Nebraska sandhills, ankle-deep in yet another mystifying crime scene.  What started as a mischievous night of debauchery for a group of bored, local high school students has ended in a bizarre calamity, the teenagers attacked by an unidentified creature with the power to electrocute.  As Maggie interviews the survivors for clues as to what really took place that terrifying night, local law-enforcement closes rank, making it clear that the seemingly harmless, rural landscape is home to some deeply buried secrets.

Meanwhile, hundreds of miles away in Virginia, Army Colonel Benjamin Platt and his colleague, Roger Bix of the Centers for Disease Control and Prevention, are baffled by a virulent strain of bacteria felling whole high schools and elementary schools with a deadly form of food poisoning—and by the anonymous whistleblower leading them on a wild chase that lands them at a shady meat processing plant in Chicago.

The two investigations collide as a shocking web of government evasion and scientific experimentation worthy of the X-Files rises to the surface of each case.  Lightning-paced and eerily prescient, Hotwire hums with intrigue, breathtaking revelations, and the trademark edge-of-your-seat storytelling that has earned Alex Kava both critical acclaim and a growing following.

1. Why does Maggie pocket Johnny Bosh’s cell phone at the scene of his suicide?  Is her action illegal?  What information does the phone reveal about Amanda Vicks?

2. Why does sheriff Frank Skylar refer to Lucy Coy as “that crazy, old Indian woman” (46) when she is, in fact, young, elegant and sharp?  Is this simple racism on the sheriff’s part, or does he have something to fear from Lucy?

3. Hotwire tackles themes of domestic terrorism, bioengineering, genetically altered food, teenage drug use, bullying, government subterfuge, military misconduct and the dangers of the meat processing industry.  How does the author maneuver these weighty topics so that they do not topple the narrative?

4. What prompts Lucy’s comment to Maggie, “I think you and I were meant to be oddities no matter where we are or what we do” (71)?  Do you think Kava favors her female characters?  Are there any male characters in the novel as fully developed and as principled as Lucy or Maggie?

5. What does Kava’s skillful evocation of the Nebraska landscape—the rolling red and gold grasses of the sandhills, the eerie vastness of the man-made pine forest—add to this story?

6. Maggie has no jurisdiction to be lead investigator on the case of the injured and dead teens, yet she decides to stay in Nebraska long enough to make sure the investigation is handled properly.  “But Maggie was here because she wanted—no, she needed—to see that Dawson Hayes was okay” (79).  Why does she feel so connected to Dawson, the self-proclaimed loser?  Does this sense of connection persist?  Does he feel it too?

7. Who follows Platt home from Williamsburg, and pays his parents a “friendly” visit as a warning to Platt to drop his investigation?

8. Julia Racine plays a relatively minor role in the narrative, as a homicide detective roped into helping Platt and Bix with the food contamination investigation.  Yet her character packs a punch, with her sassy personality and complex neuroses.  Why do you think Kava includes her in this story?  How does a phone call to Platt help Julia to transition from relationship paralysis to a new comfort level with her partner, Rachel, and Rachel’s daughter CariAnne?

9. Maggie is obsessed with her boss’s apparent scorn for her.  What explains Kunze’s suddenly magnanimous behavior at the end of the novel, when he gives Maggie the week off, with “no lecture, no punishment, no suspension” (233), despite her going awol from her conference in Denver?

10. During the interrogations of the teenagers, Maggie worries about them suffering survivor’s guilt about their dead peers.  What is her personal experience with survivor’s guilt?  How does she manage it?

11. Do you read Wesley Stotter as a UFO-chasing eccentric, or as an earnest theorist who can’t make himself heard?  Does his sudden demise in the fieldhouse come as a surprise?  What mystery is he on the verge of cracking at the moment of his death?  Does the book supply an answer to this mystery?

12. Parental abandonment figures hugely in the back-story of many characters in Hotwire.  Dawson Hayes’ mother “left them” years ago (72);  Julia Racine “was ten, just a little older than CariAnne, when her mother died” (75);  Maggie O’Dell’s father “was killed when she was twelve” (139);  Amanda Vick’s father “didn’t come home” from his tour of duty during Desert Storm (187).  Why does Kava choose this theme to unite her characters?  How does it infuse the story with tension?

13. In the novel’s opening lines, Dawson Hayes muses that, for teenagers, “Admission to the cool club didn’t come without some sacrifice” (1).  How is this adage applicable to many of the adults in the novel, as they wrangle for professional leverage?

Alex Kava’s two stand-alone novels and eight novels featuring FBI profiler Maggie O’Dell have been published in more than twenty countries, appearing on the bestseller lists in Britain, Australia, Poland, Germany and Italy.  She is a member of Mystery Writers of America and International Thriller Writers.  Kava divides her time between Omaha, Nebraska and Pensacola, Florida.

A Tap on the Window

The Room of White Fire

Shadow of Betrayal
Back to Top