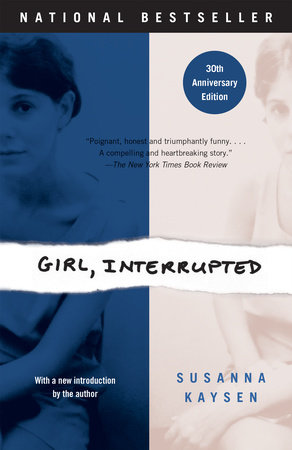 The questions that follow are designed to enhance your group’s reading of Susanna Kaysen’s Girl, Interrupted. We hope they will provide you with new ways of looking at–and talking about–a book whose style and subject matter are equally provocative.

As she recounts her two-year sojourn in a Boston psychiatric hospital and her experience of what she calls the "parallel universe" of madness, Kaysen compels readers to consider how thin the line is that separates "madness" from "sanity," deviance from normalcy, and treatment from control. Her memoir forces us to ask what role Kaysen’s gender had in her diagnosis and hospitalization. And it makes us wonder whether some forms of mental disturbance are not really illness, but, rather, new names our society has given to unhappiness and confusion, states that are common enough in teenage girls or, for that matter, in anyone who possesses an interior life.

1. The voice that narrates Girl, Interrupted may at first strike readers as cool, intellectual, rational, and controlled, qualities normally associated with sanity. It is a voice full of humor, characterized by an understatement that leaves much to the imagination. How, as we go deeper into the book, does the voice play against what it is describing–or heighten it? What is the overall effect of this voice?

2. At what point, if any, does your perception of the narrator (whom for convenience we call "Susanna") change? Does Susanna’s "unreliability" as the narrator suggest something about the nature of madness itself?

3. What does the author accomplish by juxtaposing her actual medical records and case notes with the narrative? How do these documents contribute to your impression of Susanna’s psychic state? How would this book be different without them?

4. The narrator reveals little about her life before entering McLean Hospital, and the only biographical information we receive appears rather late in the book. Why do you think Kaysen has chosen to do this?

5. The narrator describes her sojourn in McLean as a journey into a "parallel universe," one of many that "exist alongside this world and resemble it, but are not in it." What resemblances or analogies does Kaysen find between madness and everyday reality? How are the laws of these two universes different? How does one pass from one universe into another?

6. Kaysen gives us two ways of experiencing her parallel universe. One way is to make us understand how madness feels; another is to show how madness is treated (or, more accurately, controlled). What effect does she create by giving us two opposing ways of understanding insanity?

7. Most of the early sections of Girl, Interrupted are devoted to the narrator’s observations of her fellow patients. To what extent, if any, do these women seem "crazy" to you? What difference do you see in the book’s treatment of "Susanna," the character, and its treatment of the other patients?

8. How does Kaysen describe McLean’s "keepers"–its nurses, doctors, and therapists? How do you account for the difference between the hard-bitten full-time staff and the wide-eyed student nurses?

9. In many ways McLean seems like an orderly place whose patients might easily be bored, slightly neurotic college students killing time in the dorm. Madness, real madness, creeps in insidiously, taking both reader and patients by surprise. At what points do we see madness intruding into McLean?

10. At certain points the author suggests that there is something comforting, and even seductive, about insanity. What might make madness comforting to a young girl in the late 1960s–or, for that matter, to anyone at any time?

11. A girl named Daisy kills herself in between hospital stays. Is this foreshadowed by what we already know about her? Why this patient, rather than another? To what extent is the behavior of any of these characters foreseeable?

12. Susanna has no apparent reaction to Daisy’s death, but after Torrey, another patient, is released into the custody of her neglectful parents, she has an episode of what her case report calls "depersonalization" [p.105] and mutilates her hands to see if "there are any bones in there" [p.103]. Why? What is she looking for underneath her skin? What is the effect of the graphic physicality of this chapter?

13. The narrator sums up her release from McLean in the following way: "Luckily, I got a marriage proposal and they let me out. In 1968, everybody could understand a marriage proposal." What does this passage say about the choices available to female psychiatric patients–and, by extension, to any woman–at the time this book takes place?

14. The narrator describes 1968 as a time when "people [outside the hospital] were doing the kinds of things we [the patients] had fantasies of doing" [p.92]; a patient’s paranoid "delusions" might turn out to be accurate descriptions of the U.S. government’s clandestine activities. What other connections does Kaysen draw between her characters’ disturbance and the social paroxysms of their time? In what way is this book a document of the 1960s?

15. How does the narrator feel when she meets Georgina and Lisa in the outside world, years after her release? What comparison can we make between the way Susanna sees their lives and the way she sees her own?

16. How does the madness of the 1960s compare to the private and collective neuroses of Freud’s Vienna–or to the spectacular symptoms (Multiple Personality Disorder, False Memory Syndrome) of the 1980s and ’90s?

17. One reviewer has noted that someone with Susanna’s symptoms would today be given "60 days in-patient [treatment] and a psychotropic magic bullet. In 25 years, the cultural metaphor…has changed from incarceration to neglect." Is "neglect" preferable to "incarceration"? How do you think Kaysen might answer such a question?

18. Another critic begins her review of Girl, Interrupted with the observation: "When women are angry at men, they call them heartless. When men are angry at women, they call them crazy" (Susan Cheever, "A Designated Crazy," The New York Times Book Review, June 20, 1993). In what ways is Girl, Interrupted a book about the sexual constructs of madness? What role does the narrator’s gender appear to have played in her diagnosis and treatment? How do gender relations inside McLean mirror those in the outside world?

19. What is the significance of the Vermeer painting "Girl Interrupted at Her Music" that appears in the last chapter? How did Susanna feel about the painting the first time she saw it? And how did she feel about it later, after her hospitalization? Why does the gaze of the music student in the painting so haunt her?

Inside the Criminal Mind (Revised and Updated Edition)

Bittersweet
Back to Top