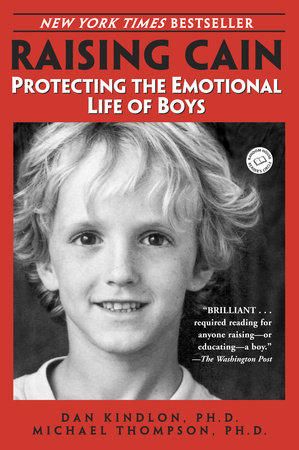 1. With what preconceptions of boys did you open Raising Cain? To what extent were your assumptions shaped by firsthand experience, media depictions, cultural stereotypes, or what the authors call archetypes? Which of your views were most challenged, if not changed, by the book? Why?

2. Kindlon and Thompson state that all boys are born with emotional potential. What obstacles prevent them from giving expression to the range and complexity of their emotional lives? How does our culture construct such barriers? Do the trials that boys face today differ considerably from those confronted by boys a generation or two ago?

3. The authors express real reservations about reducing the development of boys to a "nature versus nurture" conflict. Wherein lies their disregard for this approach?

4. Class and race do not emerge as primary issues in the authors’ examination of the challenges facing boys. What weight would you give to these issues vis-à-vis a boy’s development? Which challenges cut across lines of race and class, and which are exacerbated by them?

5. Some critics have seen Raising Cain as part of the so-called boys movement that arose in response to the girls movement engendered by the popularity of Mary Pipher’s Reviving Ophelia. Do you credit such a view? What cultural shifts help to create such a situation? What are the pros and cons of such movements?

6. In "A Paper Trail of Trouble to Come," Dan Kindlon concludes that helping male students to maintain a healthy sense of self-esteem is of primary importance. Why does he invest so much in self-esteem? What threats to self-esteem do boys often encounter, and how do they usually deal with them? What can parents and educators do to assist them in these trials?

7. Michael Thompson writes that "ease with verbal expression improves impulse control." What relation exists between a facility with language and "emotional literacy"? What activities inhibit or develop a boy’s ability to express himself? What forms of expression other than language do boys often employ in the name of expression? Discuss the shortcomings and benefits of each.

8. Which of the difficult issues facing boys today mirror those of the adult culture? What connection do you perceive between the two worlds? For example, does the pharmaceutical-as-panacea view held by many adults color the way we approach boys and their problems?

9. What lies behind the authors’ unequivocal disapproval of harsh discipline? How does corporal punishment compare to its verbal counterpart? Do the repercussions of each differ? How? Does gender often determine the sort of discipline a child receives? Should it? What characterizes constructive discipline?

12. Why does isolation, particularly that of a desperate and threatening sort, appear to ensnare more boys than girls? What leaves boys lost in the labyrinth of the self, and what helps them to move through that maze toward others? What can a parent do to distinguish a meaningful retreat to solitude from a harmful, helpless fall into depression?

13. Kindlon and Thompson argue that emotional illiteracy and the desire to flee from emotional isolation begin to explain the lure of alcohol and drugs for adolescent males. Discuss their argument. What other problems arise when a young man’s emotional life is fractured, darkened, or silenced? Do you accept the extent to which the authors invest meaning in the emotions of a boy’s life?

14. How does a boy’s relationship to his mother set the stage for his interactions with girls as an adolescent? What other factors contribute to the expectations and nascent understanding with which he begins an intimate relationship?

15. How do violence, aggression, and anger function as a means of expression for some adolescent males? What leads them from a language of words to a language of action? How does our society’s reluctance to acknowledge the complexity of causes behind violence perpetuate the problem? What significance should one assign to the sort of violence found in the entertainments–movies, video games, music, sport–popular among boys today?

16. In their closing chapter, Kindlon and Thompson write, "What boys need, first and foremost, is to be seen through a different lens than tradition prescribes." Describe the conventional lens. In what ways does Raising Cain redefine such a lens? What myths about boys were undone or unsettled by your reading? Which were preserved?

17. Acknowledging the shortcomings of the bulleted point, Kindlon and Thompson conclude nonetheless with seven suggestions for raising boys. Acknowledging the arbitrariness of lists of ten, add three more points and explain your amendments.

The interview and questions were prepared by Ron Fletcher. Ron Fletcher teaches English at Boston College High School. He is at work on his first novel.

Hold On to Your Kids
Gabor Maté, MD and Gordon Neufeld

Under the Influence
James Robert Milam and Katherine Ketcham

What Your ADHD Child Wishes You Knew
Dr. Sharon Saline

5 Types of People Who Can Ruin Your Life
Bill Eddy

The Power of Showing Up
Daniel J. Siegel and Tina Payne Bryson

Walking on Eggshells
Jane Isay
Back to Top